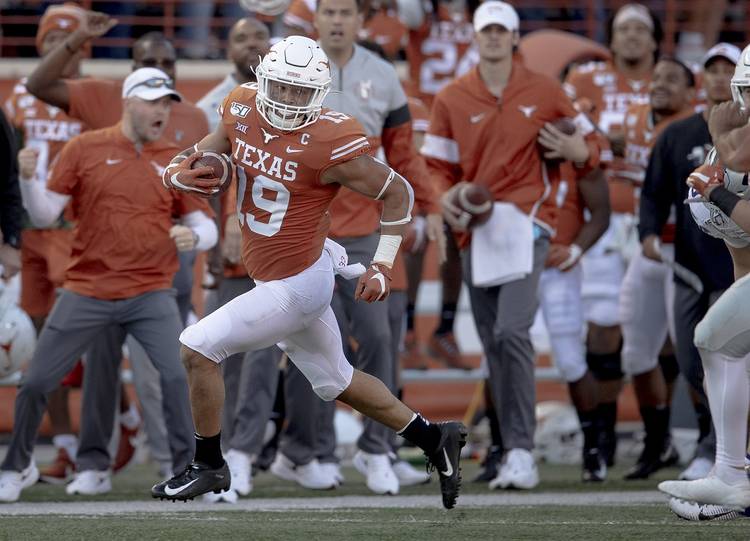 Saturday’s 27-24 win over Kansas State featured a touchdown off a flea-flicker and a 26-yard field goal with no time left, but Texas safety Brandon Jones also got on the highlight reel.

With Kansas State leading 14-7 in the second quarter, Jones forced Wildcats fullback Mason Barta to fumble the football at the Texas 38. In the second half, Jones set up a Keaontay Ingram touchdown run with a 53-yard punt return into Kansas State territory. (Texas entered the game as the only team in the country with net negative yardage on its punt returns).

“I think it was a collective thing that we did as a group,” Jones said. “There’s obviously still some stuff that we have to fix. I think in the second half we really came together and played really well.”

What turned out to be a good game could not have gotten off to a worse start for Jones, who is one of Texas’ six captains. Kansas State scored twice in the first quarter and Jones was involved with both plays. On what ended up being a 70-yard touchdown on the game’s third snap, he badly whiffed while attempting an open-field tackle of Malik Knowles. Eight minutes later, Wykeen Gill beat Jones in coverage on a 19-yard touchdown catch.

“I’m an older dude, so I know that adversity’s going to hit eventually,” Jones said. “I kind of have that 1-0 mentality and mindset — next play, next play, don’t let it linger on too much.”

After the game, his teammates and head coach weren’t surprised by how Jones responded to his shaky start.

“He’s a senior, so he’s been through a lot of football,” wide receiver Collin Johnson said. “It’s football. You’re going to win some and you’re going to lose some. The times he maybe lost a rep today, he didn’t seem fazed at all. He was able to make some big plays for us to help us win.”

Said Tom Herman: “I can’t say enough for him to not lose any confidence. He played fast. He played fearless tonight.”

O-line shakeup: UT right guard Junior Angilau did not return to the field after suffering a left knee injury in the first half. Angilau, a redshirt freshman, has started every game this season. In fact, the Longhorns’ offensive line had trotted out the same combination in all nine of its games.

Herman said Angilau will have a MRI on Sunday.

Following Angilau’s injury, junior Derek Kerstetter slid over to his spot. Junior Denzel Okafor replaced Kerstetter at right tackle. Herman told reporters that Okafor has “been our sixth guy all year. But I do know we ran the ball really, really well in the second half, and I’m sure he had a lot to do with that.”

Texas ran 38 plays in the second half. The Longhorns ran for 162 yards and picked up another 153 yards through the air. UT quarterback Sam Ehlinger was not sacked in the final two quarters.

Here's the hit in question. Wykeen Gill not expecting it at all and Jalen Green lays down a really dirty, cheap shot. #KStateFB pic.twitter.com/iNPLMeNsnT

Early exit: Starting cornerback Jalen Green was ejected in the fourth quarter when it was ruled that he had targeted Gill. The Kansas State receiver did not have the football on what was a running play for the Wildcats. By rule, Green must sit out the first half of next week’s game at Iowa State since he was ejected in the second half.

Green’s will be the third targeting-related suspension for the Longhorns this season. Defensive lineman Malcolm Roach was ejected against Oklahoma and had his subsequent appearance against Kansas delayed. Cornerback Anthony Cook missed the first half of UT’s season opener because of a late targeting call in last season’s Sugar Bowl.

Texcetera: For the second straight game, Collin Johnson and Devin Duvernay each had 100 receiving yards. Duvernay led the Longhorns with nine receptions while one of Johnson’s seven catches was a 21-yard touchdown. This marked the first time in school history that two Longhorns receivers topped 100 receiving yards in consecutive games. … Keaontay Ingram’s 34-yard touchdown run in the third quarter was a career-long run. … Kansas State senior linebacker Da’Quan Patton, who graduated from nearby Vista Ridge, recorded two tackles.