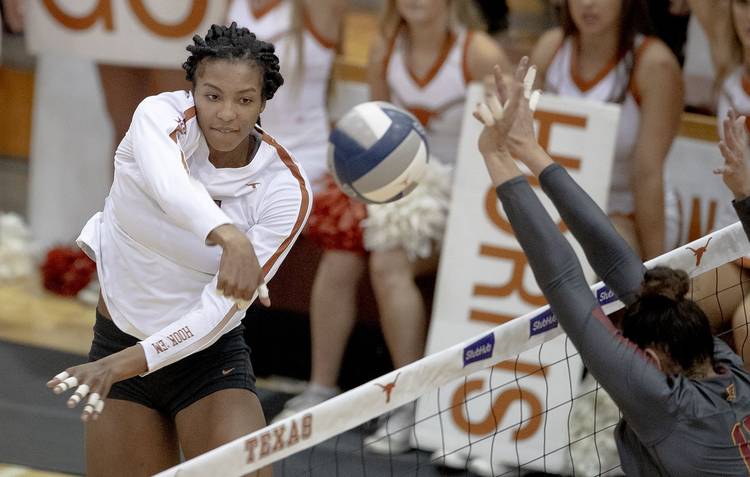 For the ninth year in a row, the Texas Longhorns got off on the right foot in their race for a conference crown.

Nineteen kills from Micaya White led the way, but Texas also got key contributions from its freshman class in a 25-18, 18-25, 25-19, 25-22 win over Iowa State on Wednesday night. The midweek meeting at Gregory Gym served as the Big 12 opener for both schools.

“It’s always good to put away that first win, especially at home in front of a home crowd,” Texas senior Orie Agbaji said. “I think that we came out and we did that.”

The No. 6 team in the country, Texas was ranked four spots below conference foe Baylor in this week’s AVCA poll. The Longhorns, though, have won the Big 12’s championship in seven of the past eight seasons.

Texas looked the part of a two-time defending champion in the opening set. The Longhorns scored the match’s first five points and led by as many as nine points. But Iowa State, which received votes in this week’s AVCA poll, hit .444 as it flipped the score in the second set.

In the third set, Texas did not lead until an Iowa State attacking error gave them a 19-18 advantage. The Longhorns scored the next five points to complete an 8-0 run. After Iowa State temporarily stopped the bleeding, Skylar Fields finished off the Cyclones with her ninth kill of the set.

“I knew we needed some energy,” said Fields, a 6-2 opposite hitter. “(Setter Jhenna) Gabriel kept giving me the ball and I was providing for the team.”

Iowa State jumped out to an 8-4 lead in the fourth frame. On the Cyclones’ eighth point, Texas suffered an even-bigger blow when sophomore Logan Eggleston fell on her face while chasing down a loose ball. Eggleston, whose 4.19 kills per set were leading the Longhorns this season, left for the locker room after bloodying her lip and chin. She did not return.

Following Eggleston’s injury, Texas rallied behind six kills and an ace from White. Middle blocker Molly Phillips also contributed three kills and a block during the fourth set. Additionally, the Longhorns got an unexpected spark from Agbaji.

Agbaji had only appeared in 11 matches since the start of the 2017 season, and her 2019 workload had been limited to a two-set appearance at Wichita State. Between rotations, Agbaji needed to warm up on an exercise bike but she contributed kills on both of her two attempts. Her second kill gave UT a 17-16 lead that it did not relinquish.

“It’s one of those things you can’t focus on it,” said Gabriel of Eggleston’s injury. “Orie came in, Orie did an amazing job. We kind of just found our rhythm again and put the game away.”

The message for the freshmen afterward?

“Personally for me, it’s strap in,” Agbaji said. “Every team is going to want to give (us) your “A” game every night. You have to be ready to go and really be ready to play any team.”

NOTES: Texas coach Jerritt Elliott said after the match that Eggleston was OK. … Sophomore middle blocker Brionne Butler played in two sets in her first appearance of the 2019 season. UT’s leading blocker from the 2018 season had missed the first eight matches of the season with a lower extremity injury. … Iowa State (9-4; 0-1) was led by Josie Herbst’s 15 kills. … The Longhorns will host Texas Tech on Saturday afternoon.