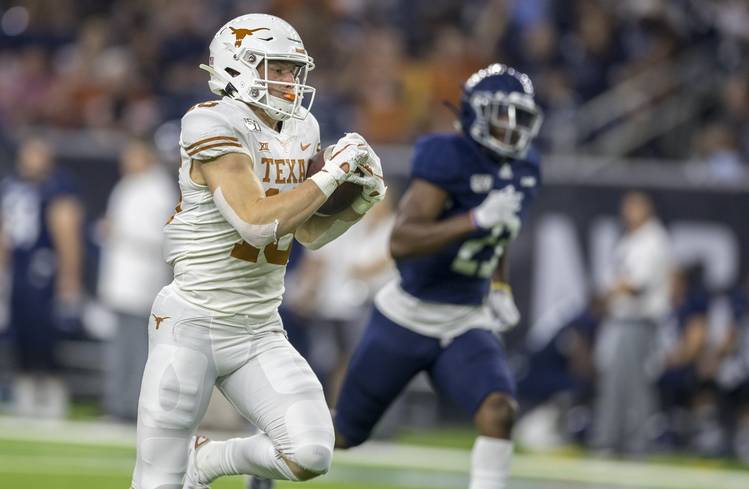 Texas Longhorns wide receiver Jake Smith (16) pulls the ball in as he runs to the end zone for a score against Rice Owls in the first quarter of the game during an NCAA football game at NRG Stadium in Houston Texas on Saturday, September 14, 2019. [RICARDO B. BRAZZIELL/AMERICAN-STATESMAN]

Granted, it’s early. But Texas fans, your spider senses could be absolutely right about this one.

The Jake Smith comparisons to Jordan Shipley feel so spot-on accurate, it’s uncanny. Even Shipley, the best receiver in Texas history, will co-sign that undeniable feeling.

“You can tell he’s going to be a special player. I don’t think there’s any doubt about that,” Shipley said Monday.

“The biggest thing is getting opportunities at the right time with the right people. I think he’s got the potential to be one of the better inside receivers that’s ever played at Texas, for sure.”

So how often are people saying Smith, who wears No. 16, looks like the old No. 8? “Oh, every time his name comes up when I’m around,” Shipley said.

What most forget is that Shipley signed in 2004 but didn’t play until two years later because of a series of injuries. Mack Brown’s coaching staff essentially made Shipley prove that he deserved more playing time when he finally got healthy in 2006. Even then, it was shaky.

On Sept. 16, 2006, Shipley, still classified as a freshman, had a 38-yard touchdown catch against Rice to fuel a blowout win. It was just his second career catch in two games.

On Saturday almost 13 years to the day, Smith, also a freshman, had two touchdown catches against Rice to fuel a blowout win. He’s now got three touchdown grabs in three games.

“I almost texted him,” Shipley said. “I scored my first touchdown against Rice. I guess it was kind of fitting that he had to double up.”

“Yeah, my confidence is steadily rising, I would say,” Smith said after the 48-13 win Saturday night. “After the LSU game, I felt really good and (after) La Tech, too. I’m just building on that confidence every week.”

Maybe it’s their size. Shipley was 6-feet tall. So is Smith. Shipley was listed at 190 pounds as a senior in 2009. Smith is listed at 200 now. “He put a lot of work in the weight room,” Shipley said. “He’s not super tall, but he’s pretty strong, a stout guy, too. Put it this way, he’s probably a good solid three inches taller than Wes Welker. Maybe more.”

Shipley was ranked the 18th-best recruit in Texas from Burnet. Smith, a star at Notre Dame Prep in Scottsdale, Ariz., was considered the second-best recruit in Arizona. Both looked comfortable in the open field. Both have soft hands and make people miss.

Coaches asked Shipley to help recruit Smith to Texas so he knew the comparisons would be inevitable. “That was sort of the foresight from the word go. So I expected it,” Shipley said.

As a high school junior, Smith had 1,135 rushing yards and 1,055 receiving yards. “I think my junior year is really when I realized it,” Smith said. “That’s kind of when I took off, I would say. I started getting offers then and I kind of thought, you know, it’s crazy, but I thought it can’t be a mistake. You know, I’m getting these for reasons.”

Smith had another spectacular year as a high school senior, piling up 2,349 all-purpose yards and becoming the national Gatorade player of the year. After the Rice game, Smith said he was nervous about moving up to the college level. “And at the end of the day, it’s just football,” he said, “the game I’ve been playing for so long.”

“You know, he was not an early enrollee,” Texas coach Tom Herman said Monday. “So his first taste of college football was training camp, and it certainly hit him like a shovel to the face. But he made it through those dog days of training camp.”

The coaching staff considered moving Smith to running back after that position group was thinned by injuries. Ultimately, coaches decided to keep Smith at receiver and move quarterback Roschon Johnson to the backfield.

Johnson is averaging 4.7 yards per carry as a running back in three games. Moving Smith to running back, Herman said, “would have stunted his growth significantly at the slot receiver position.”

Asked when he knew he would contribute, Smith said, “I would say the first day of pads. Full pads, I was a little nervous. College football, all these things going on in my head. Like I said earlier football is football, so I think that’s when I kind of realized it.”

Said Herman: “We still keep it fairly simple for (Smith). We don’t ask him to memorize the entire offense just yet. Really pleased with his toughness and his dependability.”

If decisions are based on cost benefit analysis, Smith’s upside at slot receiver is obvious. In three games, he’s been targeted 16 times as Devin Duvernay’s backup.

Duvernay joked last week how the Texas offense is “H-friendly,” referring to the slot position. In three games, Duvernay has been targeted 31 times. The senior has a team-high 27 catches for 269 yards and three touchdowns.

“I think our wide receiver room is the best in the country,” Smith said. “And we trust all the guys in that room to go out there and make plays. I think it’s an unbelievable room, and I’m just happy to be a part of it.”

Shipley said with “monsters” like 6-6 receiver Collin Johnson on one side and 6-4 Brennan Eagles on the other, defensive coordinators face a tough choice. If defenses use bracket coverage on the slot receiver, quarterback Sam Ehlinger will throw it out wide or the Horns can “gash them with the run.”

“Right now in that offense, this is probably the best scenario there’s ever been to be a slot receiver at Texas, except for maybe the Colt McCoy era,” Shipley said. “That’s the great thing about this team right now and this offense. They’ve got a great scheme. They’ve got an unbelievable quarterback, and they’ve got a bunch of targets.”

Shipley finished his freshman season with 16 catches, a paltry 229 yards and four touchdowns. Smith already has 11 catches for 126 yards and already on pace to break a few freshman records. He should blow past Shipley’s numbers in the coming weeks.

Shipley had 417 receiving yards as a sophomore. It wasn’t until his final two years that Shipley really took off, courtesy of a boatload of throws from McCoy.

Shipley had 89 catches for 1,060 yards as a junior and a school-record 116 catches for 1,485 yards as a senior. Along the way, Shipley helped the Horns win the Fiesta Bowl and reach the 2009 national championship game.

“I’m beat to death, man,” said Shipley, now 33. “Every joint has been reconstructed pretty much. I’ve had two major surgeries on my right shoulder. I’ve had three on my right knee. I’ve had ACL, MCL, meniscus (tears) on my left knee. My left shoulder, I had the labrum torn two-thirds the way around. Everything is pretty beat to death.”

It’s far better to sit on the Longhorn Network stage and do the TV work nowadays. Shipley said he can take one look at Smith and have mental flashbacks. And he’s just fine if you want to compare the two.

“He can probably take off without even warming up or stretching,” Shipley said. “Those days are long gone for me.”