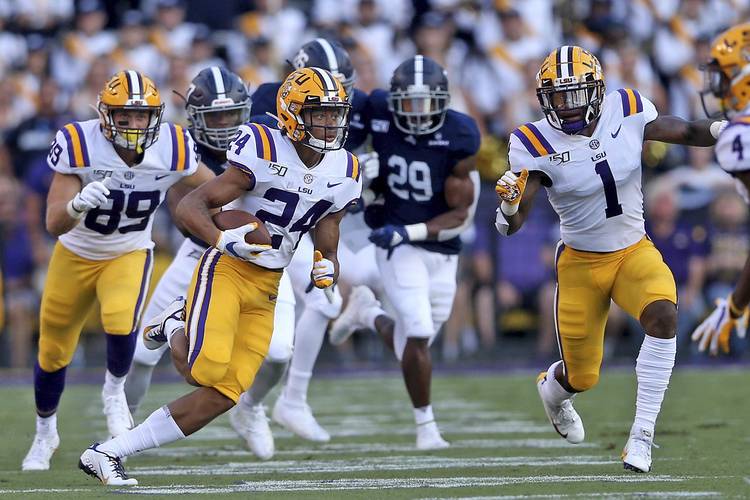 What’s up with the LSU Tigers? We reached out to Brooks Kubena (@BKubena) of the Advocate to offer his insight:

Was last week’s 55-point effort a testament to LSU’s new offense, Georgia Southern, or a bit of both?

The fact that LSU was playing Georgia Southern certainly magnified the successful parts of the new offense. Ed Orgeron said that in essence after the game. But the Eagles did have Kindle Vildor at corner — a second team All-American last year by Pro Football Focus — so their secondary can’t be entirely written off. The main changes that needed to occur were all there: spread the ball out (14 different receivers caught passes, three caught touchdowns); be more efficient in the red zone (LSU scored touchdowns on all seven of their red zone possessions); pick up the tempo (no-huddle offense, and most of the time it was about 20 seconds in between plays); and improve pass protection (no sacks given up in a game for the first time since 2017).

Where would you rank Joe Burrow among the quarterbacks in the SEC?

Right now, Burrow’s 232.79 passer rating is No. 3 nationally, No. 1 among SEC quarterbacks. His five touchdown performance was enough evidence for me to believe he’s in the top three between Alabama’s Tua Tagovailoa and Georgia’s Jake Fromm. I think as more games pass, we’ll see enough out of the big games that shows Burrow is more dynamic as a passer/runner than Fromm to take the No. 2 spot. I think Tua is a few steps ahead of everyone in the country right now, not just those in the SEC.

Devin White and Greedy Williams were among the first 46 picks of this year’s NFL draft. Who will LSU miss more?

Devin White was a freak athlete. At 6-1, 240, he ran a 4.42 at the NFL combine. LSU defensive coordinator Dave Aranda created a whole defensive scheme that was built around him. I lack the tenure to make this kind of call, but those who have been around the program for a long time have said that if White had come back another year, he would’ve been the greatest linebacker in LSU history. To me, I’m taking the time conditional out: he was the greatest linebacker in LSU history. His raw athleticism and leadership simply cannot be replaced. LSU, as always seems to be the case, will be fine at corner: Kristian Fulton was considered by some to have even been better than Greedy last year, and true freshman Derek Stingley was the No. 1 overall recruit in the nation and is playing that way. The drop off at linebacker is more significant, even though LSU has four guys on the Butkus Award watch list. Michael Divinity was an outside linebacker last year, and Aranda is crafting a different scheme according to his skills, which, as time has it, will immediately follow the years of a future Hall of Famer.

Are people as excited about this game back in Baton Rouge?

Yes, although several are miffed that LSU’s allotment (3,000 tickets) was so low. Then again, that’s just the nature of home-and-homes. It’ll be the same deal the other way around when Texas goes to Tiger Stadium next year. Outside of the actual game atmosphere, the context of LSU’s return to national prominence has certainly been long in the waiting in Baton Rouge (again, kind of like how it’s been at Texas). The parallels between these programs abound: shaky quarterback histories, long stretches of non-championship play, coaching changes after title-winning coaches lost their widespread support, and on and on. If there’s any Texas folks out there wondering how LSU fans are feeling about this game, just ask yourself the same question.

Name one LSU player that Texas fans aren’t talking about — but should be.

Joe Burrow. Kidding. I’d say Derek Stingley. Fans who keep up with recruiting will have certainly heard his name before since he was the No. 1 overall recruit by Rivals. He’s the grandson of Darryl Stingley, the wide receiver who was paralyzed after being hit by Jack Tatum in 1978, and the son of Derek Stingley Sr., who played both professional football and baseball. Stingley is thought to be the youngest player to ever officially practice with the LSU football program. He graduated early enough from high school to join the team during Fiesta Bowl practices on campus last December. Dave Aranda actually said at the time that he looked like the best corner out there. So, he’s been around long enough to where he’s pretty much a redshirt freshman already. He’s a starting cornerback already, and Ed Orgeron has compared his punt return capabilities to Reggie Bush (s/o Kirk Bohls). If there were LeBron-era draft rules for the NFL, it wouldn’t be silly to say Stingley would have been selected out of high school.

You are a UT graduate. What places will you be visiting during your homecoming?

I’ve already crossed off a few places: Black’s BBQ, Crown and Anchor Pub, a few nostalgic places on campus. I’ll be making a few student media cameos, which I actually am really excited about because I enjoyed doing college TV and radio so much in college. There’s a few more restaurants I’ll be looking to expense (s/o Perryn Keys) and bars I’ll be spending probably too much time in after I finish my stories.

Editor’s note: The original version of this story was edited to correct Stingley’s early graduation from high school.