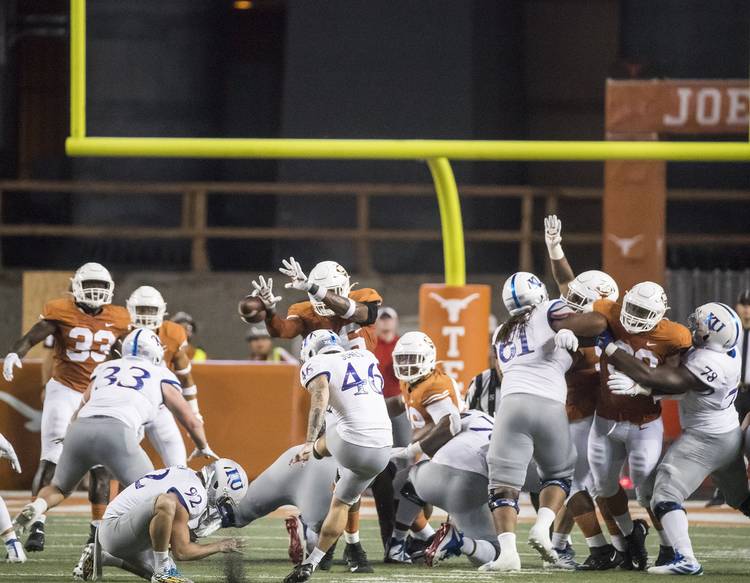 This week’s notable number is 2 — the jersey number assigned to freshmen Roschon Johnson, a quarterback-turned-running back, and cornerback Kenyatta Watson II. Only two Longhorns (Brandon Jones and Joseph Ossai) have recorded more tackles than Caden Sterns, who has missed half of the eight games with a knee injury. There have been two 200-yard receiving performances in the 1,319 games played at Texas.

When icing an opposing kicker, a team calls a timeout just before the snap on an attempted field goal. The point is to throw off his rhythm or make him think longer about what is usually a high-stakes kick.

For this exercise, we are only considering the timeouts Texas has called before a field goal attempted in overtime or within the final 30 seconds of a half. Since 2017 — Herman’s first season — Texas has faced five situations that met that criteria. Following a Texas timeout, opposing kickers have been successful on three of the five kicks:

On two of the made field goals, the decision to call a timeout actually backfired on Texas. Kell, a freshman who was attempting his third-ever field goal, missed his first 52-yard try. The timeout, however, was called just before the snap. The same thing happened last season with Staley. With a practice kick behind them, both kickers were successful on their second tries.

On Monday, Herman was asked about icing an opposing kicker. He lamented letting Kell get in a free kick and said he should have called his timeout earlier. Herman argued, though, that messing with a kicker’s routine was worth the usage of any remaining timeouts.

“So if you can do anything to — that’s such a routine-oriented position in terms of your steps and your — everything that you do in terms of your setup, it’s very much like a golf swing where you’re going to grip the club a certain way, you’re going to dig your cleat in a certain way,” Herman explained. “I do think that anything you can do that doesn’t — there’s no cost benefit in terms of, well, I could have saved them until the second half. You don’t get them; they go away at halftime.”

Over the past three seasons, Texas kickers have also breezed past icing attempts by opposing coaches. In fact, rival Oklahoma has tried that trick four times. In 2017, Joshua Rowland made a 34-yard field goal just after OU had called a pre-halftime timeout. Last month, Sooners coach Lincoln Riley burned three timeouts before Cameron Dicker coolly nailed a 49-yarder with no time left in the first half at the Cotton Bowl.

When asked later about Riley’s timeout tactics, Dicker said the sequence taught him a lesson. “I just didn’t know that was possible,” said Dicker, who also made a 22-yarder after a 2018 icing attempt by Iowa State. “I was laughing about it because all I know is Madden. In Madden, you can only call one.”