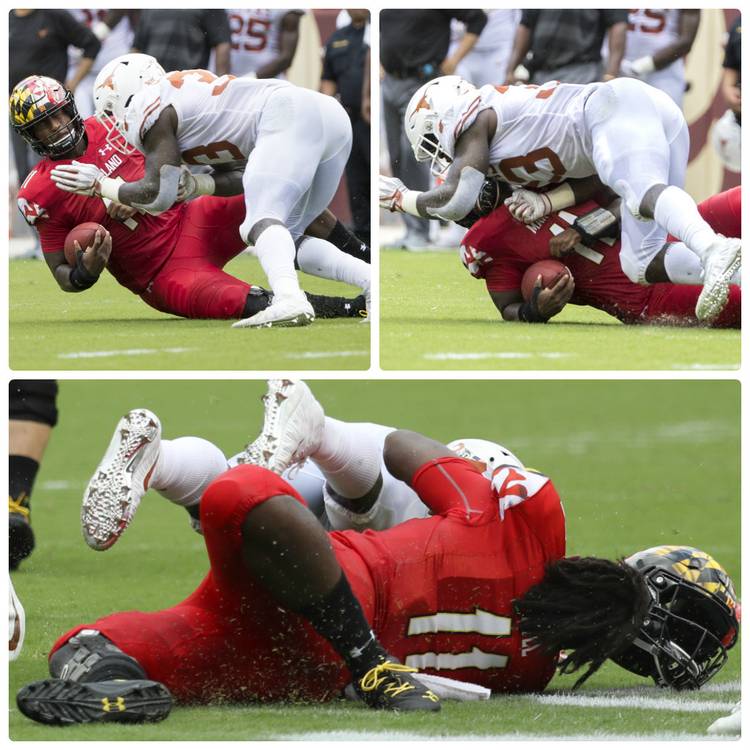 What does a targeting penalty look like? Here are three different shots of the same tackle that Texas linebacker Gary Johnson (33) was ejected for in last week's 34-29 Maryland win. Terrapins quarterback Kasim Hill was not injured on the play. (Photos by American-Statesman/Getty Images)

Six also represents the number of targeting penalties that Texas has drawn since 2013.

Ahead of that 2013 season, the NCAA began taking a serious stance against targeting, or illegally hitting a defenseless player above the shoulders. Now, in addition to a 15-yard penalty, a player who draws a targeting penalty also is ejected. And if the penalty comes in the second half, he also must miss the first half of the next game. Wheeler missed last Saturday’s first half because he was tossed from the 2017 Texas Bowl for targeting in the fourth quarter.

Steve Edmond was the first Longhorn to draw a targeting penalty; the linebacker missed the fourth game of the 2013 season. The Longhorns have had a player ejected for targeting in three of the last four games. Against Maryland, it was senior linebacker Gary Johnson, who was disqualified for a second-quarter tackle of Maryland quarterback Kasim Hill.

Johnson connected on a helmet-to-helmet hit with a sliding Hill. Texas coach Tom Herman, while supporting the safety aspects of the rule, argued Monday that intent should factor into the decision to eject a player. He contended that Johnson had set himself up for a low tackle of Hill, but the quarterback’s decision to slide put his head in the line of fire.

“I have been in favor and will continue to be in favor of — you know, there’s many different sports that legislate intent when determining personal fouls and ejections and so on and so forth, flagrant ones, flagrant twos, yellow cards, red cards, whatever you want to do,” Herman said. “So I get it. A bang-bang thing like that happens and you make contact with your shoulder to his head as he’s sliding. Should it be a penalty? Probably. But should the kid get kicked out of the game? I don’t think so. I really don’t.”

During the first week of the season, SMU linebacker Trevor Denbow and Texas Tech defensive back Desmon Smith also were removed for targeting penalties. Texas A&M had two defenders kicked out against Northwestern State. After Michigan safety Josh Metellus was called for targeting, his replacement was subsequently torched for a 43-yard touchdown in a 24-17 loss to Notre Dame.

Miami defensive back Trajan Bandy also was flagged for targeting on the Hurricanes’ fourth defensive snap against LSU. Miami defensive coordinator Manny Diaz echoed Herman’s sentiments about judging intent, saying that “If that’s going to be a penalty, that’s fine, that should be a 15-yard penalty. That should not be a disqualification. There’s not another sport where we disqualify a player for a technique that had no malintent. It would be like throwing a guy out of an NBA game just for a foul.”

UT coaches will continue to instruct players to go low on tackles, Herman said. Defensive end Charles Omenihu said that defenders just have to play smart and “you’ve got to understand when the quarterback is sliding that they are going to protect the quarterback.” The Longhorns, though, don’t expect to change their mindset on the field.

“Me being on the defensive side, I love to hit,” said senior defensive tackle Chris Nelson, who had five tackles. “Everything is not going to work out in your favor. The way the rules are going, you’ve just got to take it in because you can’t do anything about it. Like the coaches say, control what you can control but at the end of the day, I’m still going to hit hard.”