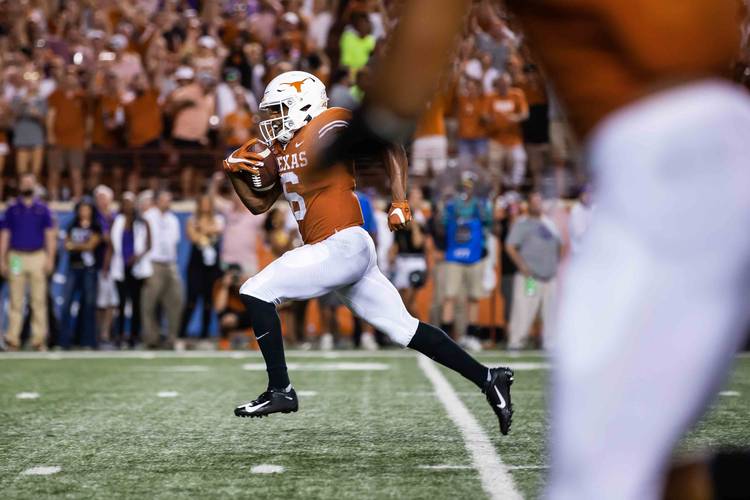 Texas receiver Devin Duvernay (6) sprints down the field during a game against LSU on Sept. 7, 2019 in Austin. [LOLA GOMEZ/AMERICAN-STATESMAN]

This week’s notable number is 10 — the jersey number that Texas retired in 2008 in honor of Vince Young. UT punters Ryan Bujcevski and Chris Naggar have both pinned 10 kicks inside the opponent’s 20. The Longhorns have compiled 400 yards of offense in 10 different bowl games, but that feat was last accomplished during the 2009 Fiesta Bowl.

Ten also represents the most receptions that Utah has allowed to a single receiver this season.

In a 30-23 win over the Utes on Sept. 20, USC receiver Michael Pittman Jr., hauled in 10 passes. No other player has reached double-digit catches against a pass defense that ranks 12th nationally (185.9 yards per game). That season-high allowance could be threatened in Tuesday’s Alamo Bowl, however.

Texas slot receiver Devin Duvernay has caught at least 10 footballs in three of UT’s games. A senior, Duvernay is producing 8.6 receptions per game. That average has been bested by only Pittsburgh senior Maurice Ffrench’s 8.7. With 103 catches, Duvernay trails SMU’s James Proche by eight receptions on the national leaderboard.

Duvernay was placed on the Big 12’s honor roll earlier this month. He, however, was not named an All-American. The Biletnikoff Award, which is given annually to the nation’s top receiver, also did not name Duvernay as one of its 12 semifinalists.

“I think it’s a shame that Devin Duvernay was not up for any type of postseason award. It’s a joke to be honest with you,” Texas co-offensive coordinator Herb Hand said. “I wouldn’t trade him for anybody.”

The 5-11, 210-pound product of Sachse High hasn’t shied away from saying he’s among the fastest players in the Big 12. Duvernay is averaging 12.6 yards per catch and his career has featured 63- and 80-yard touchdowns and two 75-yard scores.

When it comes to speed, Duvernay could meet his match at the Alamodome. The expected starter at nickel back for Utah is junior Javelin Guidry. On Saturday. Utah defensive coordinator Morgan Scalley referred to Guidry as “one of the answers” for Duvernay.

While in high school, both Duvernay and Guidry won 100-meter sprint titles in the state of Texas. At the Class 6A meet in 2015, Duvernay was timed at 10.27 seconds. One year later, Guidry took the Class 5A crown with a time of 10.41 seconds.

Guidry climbed to the top of the medal stand as a Cedar Park High student. He then won a 100-meter title in California the following year. Utah does not have a men’s track and field team, but Guidry was timed at 6.59 seconds in the 60-meter dash while competing unattached at last January’s UW Invitational.

“When you can win the 100 meters in the state of Texas and in the state of California, there’s something special about you, OK,” Scalley said. “He’s got a ton of speed.”

Added Utah defensive back Terrell Burgess: “When the ball’s in the air, it’s like this extra gear that kicks into him and it goes. He’s a very fast human being. It looks effortless, if that makes sense.”

Guidry once gave Tom Herman a verbal commitment while Herman was the head coach at Houston. Herman also offered Guidry a scholarship once he got to Texas. But Guidry, whose father was a starting cornerback for UCLA in a 66-3 blowout of Texas in 1997, chose Utah ahead of 2017’s signing day.

The Utah secondary will be missing All-Americans Julian Blackmon (injury) and Jaylon Johnson (NFL Draft prep) on Tuesday. Guidry, though, has compiled 42 tackles and six pass break-ups in 2019. While speaking with the media on Sunday, Duvernay said he was looking forward to the speedy duel.

“It’s always fun going against some bigger names,” Duvernay said. “I’m always up for a challenge, though, and look forward to it.”