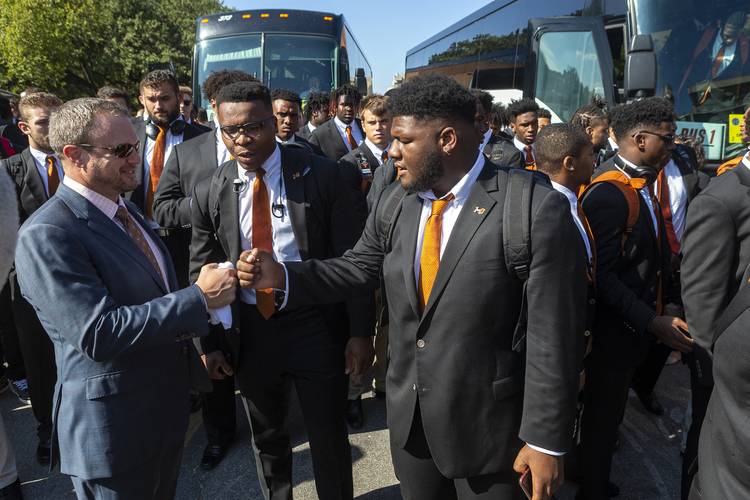 “It takes time. It certainly takes time,” said Texas quarterback Sam Ehlinger, who started six games as a freshman in 2017. “I think some people mature faster than others, but it is difficult and it takes time.”

Texas defensive coaches and players believed in redshirt freshman Keondre Coburn from the start. It’s taken a full month of preseason practice and three games to get where Coburn now believes in himself.

“I felt like I wasn’t really just having fun, because I was worried all the time,” Coburn said Tuesday. “When you just take the process and you slow it down, you take it step by step and then it gets so much better.”

Defensive coordinator Todd Orlando said in July that Coburn would be the likely starter at defensive tackle, following in the footsteps of Poona Ford and Chris Nelson. Coburn started the first two games but had no statistical impact.

The Spring Westfield product notched his first sack against Rice and had two tackles. The Owls had just 87 rushing yards and couldn’t really do much in UT’s 48-13 win.

Coburn admitted he was focused too much on “not doing wrong” as opposed to playing free and easy. “I feel like if you mess up, mess up in the right way,” Coburn said. “So if I mess up in the middle on the wrong gap, re-balance and go get a tackle.”

“I thought Ta’Quon Graham might have had his best game at Texas (against Rice),” Herman said, “and then obviously Keondre and Malcolm continue to be disruptive.”

The split-second Fox camera shot is now an Internet meme that’s useful for any Longhorn in a successful situation. “We just like to have fun on the sidelines. Just making faces,” Dicker said.

He says he thinks he was winking at Joseph Ossai. pic.twitter.com/g0LUQnDdgx

Dicker was a cool customer Saturday after hammering home a career-long 57-yarder against Rice. Part of his success came from being indoors at NRG Stadium. “They turn the A/C on behind you when you’re kicking,” he said.

In two straight games, he has been sent onto the field for what looked like a 50-yard field goal situation. Herman changed his mind against LSU and called Dicker back, sending out the punt unit instead. But Dicker stayed on the field against Rice and drilled it.

Dicker is 4-for-5 on field goals this season. His only miss came from 49 yards. After talking with reporters, he walked away from the scrum and said, “Boom!”

LB Johnson in portal: It’s rare for players to think about transferring this early in the season. But freshman linebacker Caleb Johnson has put his name into the NCAA transfer portal, a UT spokesman said Tuesday.

Johnson enrolled in January after transferring from Fullerton College in California. He was ranked the 39th-best junior college prospect in the nation, according to 247Sports. He has not played in the first three games. However, coaches like his long-term potential and do not want him to leave, according to a source familiar with the coaches’ thinking.

New student entry policy: Texas athletics announced a new entry policy for UT students after an unwieldy experience prior to the LSU game.

Two weeks ago, videos posted on social media show thousands of UT students pushing past security personnel to rush into the stadium for a good seat. Ironically, just a few years ago, school officials couldn’t beg enough students to come at all.

Starting this week, students will line up in a queue on the east side of DKR and enter only through Gate 31. Once students line up, they will be issued a color-coded wristband to indicate what section they can sit in. Students must have a wristband to enter the stadium.

During the game, students can exit and return to their section with a proper wristband, according to UT. During the LSU game, students were tweeting directly to athletic director Chris Del Conte and saying that security would not let them return after going to the bathroom or the concession stands.

No worries about the A/C: Oklahoma State reporters had to ask Cowboys coach Mike Gundy about the air conditioning situation inside the DKR visiting locker room. Gundy doesn’t expect any problems. “Swamp Gate,” as one person dubbed it after the LSU fiasco, is finally dead.

“I don’t know. Somebody sent me that a week ago,” Gundy said Monday. “They have a nice facility. We’ve never had problems with air. Chris Del Conte, the athletic director, is a pretty squared away guy. I can’t imagine he would ever do that. But I would say they’ll probably have air conditioning in there.”

Asked if Oklahoma State will bring any extra fans just to be sure, Gundy chuckled. “No. We don’t have room on the truck,” he said.