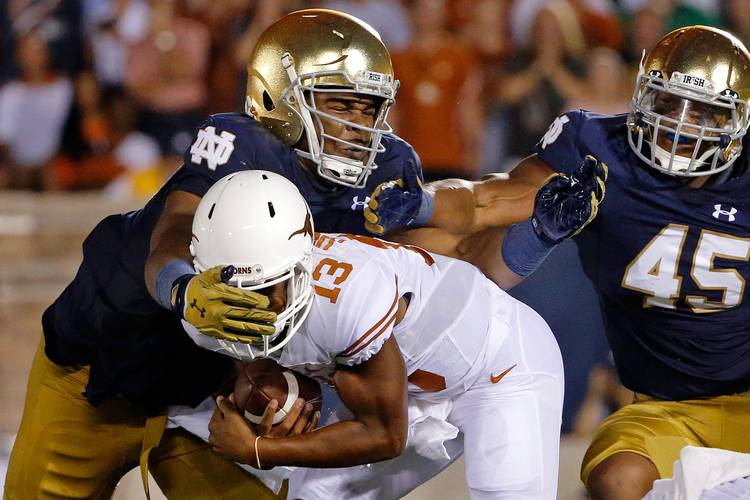 On Saturday morning, we asked four questions about the Texas-Notre Dame matchup.

HOW MANY FRESHMEN WOULD PLAY?

In all, there were 16 freshmen or redshirt freshmen who played. That includes the ones who were atop the depth chart at their respective positions — left tackle Connor Williams, right guard Patrick Vahe, middle linebacker Malik Jefferson and punter Michael Dickson. There also were OLB Edwin Freeman, QB Jerrod Heard, DE Derick Roberson and OLB Breckyn Hager sightings, too.

HOW WOULD MALIK JEFFERSON PERFORM?

Now we know why Jefferson was the state’s No. 1 recruit last year. The only two times we’ve seen him on the field, No. 46 has been impressive — six tackles, one for loss, and a forced fumble in the spring game, and then nine tackles and 2.5 for loss against Notre Dame. If Texas had 10 others like him, the Longhorns wouldn’t be allowing 38 points.

WHEN WOULD JERROD HEARD ENTER THE GAME?

On Texas’ third series. It was a mixed bag of results for Heard, and certainly a small sample size for the redshirt freshman. He played two drives. One ended with a hard hit that sent him back to the sideline, another was a sack that came dangerously close to a safety. Charlie Strong said earlier in the week that there definitely was a plan in place for playing Heard. It ended up being two series of work.

HOW MANY BIG PLAYS WOULD THE OFFENSE MAKE?

And, by big plays, we meant gains of 20 yards or more.

The answer? Two. There was a 48-yard pass from Tyrone Swoopes to John Burt, and Daje Johnson had a 20-yard catch.

Last year, the Longhorns ranked 101st nationally in this category, with only 47 plays of 20 yards or more. At this rate, Texas will finish with about half that total.

Next up for the Horns: Rice