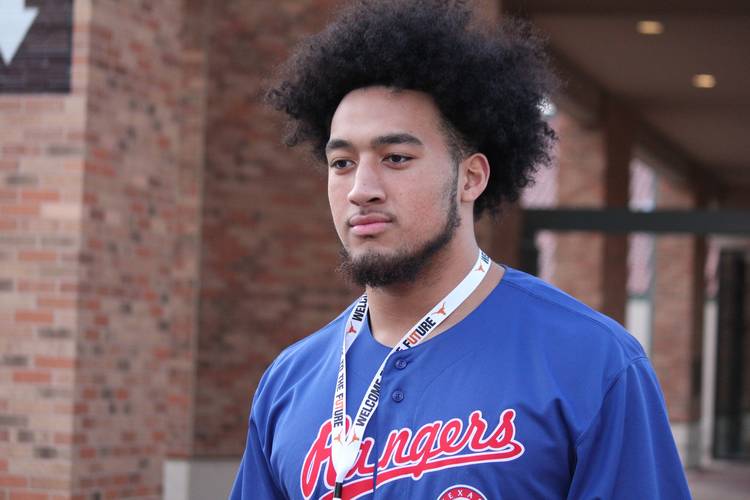 Texas hosted dozens of targets in the 2019, 2020 and 2021 class Saturday for the first of two junior days this weekend. The Longhorns will host more prospects Sunday. Texas didn’t pick up any commitments and only handed out two offers during the day.

One of those offers was Arkansas offensive lineman Stacey Wilkins of Camden Fairview High School. The 6-foot-7, 280-pound prospect is scheduled to commit in May. Texas was his 17th offer in the 2019 cycle and it immediately put the Longhorns in the mix with Arkansas and Oklahoma. He now holds an offer from all three schools.

“I’d have to put Texas in my top schools because of the coaches and the plans it has for the players after school. It was a top academic school and a great city,” he said after junior day. “I also think Texas has one of the best offensive line coaches in the country. I knew of (Herb Hand) from Auburn and know he’s a proven coach.”

Wilkens spent 1-on-1 time with Tom Herman and new offensive line coach Herb Hand. Wilkens went as far as calling Herb “the best offensive line coach” in the country. Coaching will play a bigger role in his recruitment than location, though most Arkansas natives end up playing for the Razorbacks if offered.

“I’m okay getting out-of-state. Whatever fits me best is where I’ll end up,” said the three-star offensive tackle. “Oklahoma, Texas and Arkansas are up there, along with TCU. I’ll probably take some spring visits”

Wilkens also mentioned Georgia as a place he’ll officially visit. He’s the 49-ranked offensive tackle in the nation and the fifth-ranked prospect in Arkansas, per 247Sports Composite.

This is the time of year prospects emerge from relative unknown to wanted commodity. Baylor Cupp, a 6-foot-6, 235-pound tight end from Brock High School, picked up a Texas offer on junior day. One day after picking up an offer from Texas A&M.

After a incredible junior day and talking with coach Herman and Warehime, I am beyond blessed to say I have received an offer from the University of Texas!! #HookEm 🤘🏼 pic.twitter.com/WlO97qb6Ry

“He’s a great kid and deserving of everything that’s coming to him,” said Brock head football coach Chad Worrell. “We knew he was big time. Now, everyone else is finding out what we already knew.”

Texas was Cupp’s eighth offer. He’s a three-star talent sure to shoot up the rankings. The Longhorns want to maximize the tight end position under Herman.

The Longhorns signed 4-star prospect Malcolm Epps in the 2018 class. Epps is more of a wide receiver with the frame to grow into a three-down tight end. Cupp is already a physical player who excels as a blocker. He’s the first in-state tight end to receive an offer from Texas in the 2019 class.

Texas only holds one commitment in the 2019 class, but 2020 running back Zachary Evans is of high priority to the Longhorns. He took a visit to Austin for the second consecutive weekend, this time for junior day.

The future 5-star talent is the biggest running back prize in the state for the 2020 class and it is shaping up as a battle between Texas and Alabama. Texas took another step forward during this visit, spending quality time with Evans breaking down film to display the role Texas wants him to play.

“It was a great visit. I got to spend time with coach Herman and coach (Stan) Drayton,” he said. “We got into film and broke down the tape and how I’d fit. They like to use the back in the backfield and at the slot. I have to be able to bond with the coach and the team.”

Evans is slow to name a true favorite and nearly two years separate him from the 2020 national signing day. He plans to release a top 15 list before his junior year, but it is clear the Longhorns are one of the major players for the Galena North Shore product.