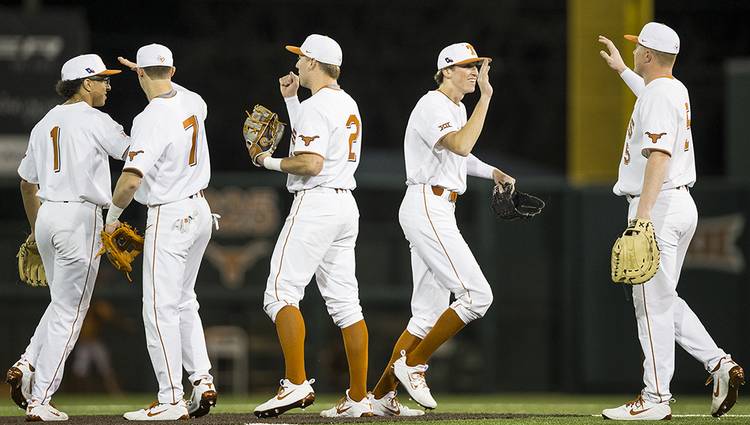 Texas opened its 2018 baseball season on Friday with 20 fresh faces on its roster and newcomers starting at catcher, second base and center field. Ex-third baseman Ryan Reynolds started at first base, while Kody Clemens returned to third base following a year of designated hitting. Austin Todd was UT’s right fielder after making 33 of last year’s 35 starts in one of the other two spots in the outfield.

Kingham, however, is still an ace.

Kingham cruised through an eight-inning appearance, and Texas began its year with a 3-0 win over Louisiana-Lafayette. The victory gave Texas, which went 39-24 last year, its first season-opening conquest since 2015.

“I told all the young guys and (junior college) guys, it’s just another game,” said Kingham, who picked up all-conference honors while going 10-4 with a 2.84 ERA last season. “Yeah, it’s opening day, you can make it as big as you want. It’s just another game, just go out there and have fun.”

In the lead-up to this year’s first pitch, Kingham was named to three preseason All-American teams. Last week, he was placed on the watch list for USA Baseball’s 41st Golden Spikes Award.

He lived up to the hype in the first start of his junior year.

Relying on his fastball, slider and sinker, Kingham allowed three hits and a walk. His 10 strikeouts bested the career-best of eight that he recorded at Stanford last year. After a bit of a slow start, Kingham sat down 12 straight batters at one point. He retired the final six batters he faced.

“Nolan was disgusting,” Texas shortstop David Hamilton said. “He was good last year, but he seems like a different animal this year. He’s going to be good.”

Kingham only needed 89 pitches on Friday, 11 of which thrown over the fifth and sixth innings. Texas coach David Pierce planned for Kingham to throw between 70 and 90 pitches, but the right-hander approached the high-end of that pitch count since a lot of his innings were “non-stress.”

“If I could draw it up, it happened,” said Pierce, who is in his second year with the Longhorns. “I’m really pleased with that.”

A run-scoring groundout by Todd in the third inning provided Texas with all the offense it needed. Texas had six hits, three of which were recorded by second baseman Masen Hibbeler. A transfer from Odessa College, Hibbeler appeared second in UT’s batting order and produced two steals and two runs in his debut.

Around the bases: Texas improved to 73-48-2 in its all-time season openers. … Hitting third and fourth in the line-up, Clemens and Todd were responsible for all three of Texas’ RBIs. … Texas stole four bases on Friday. Last year, UT stole four bases in four different games. … After making 61 relief appearances in 2016 and 2017, Texas pitcher Chase Shugart will make the first start of his collegiate career on Saturday. He’ll go against Nick Lee, who went 6-4 with a 5.12 ERA in 2017.

In volatile Big 12, can the Texas men rebound in the Red River rivalry rematch?