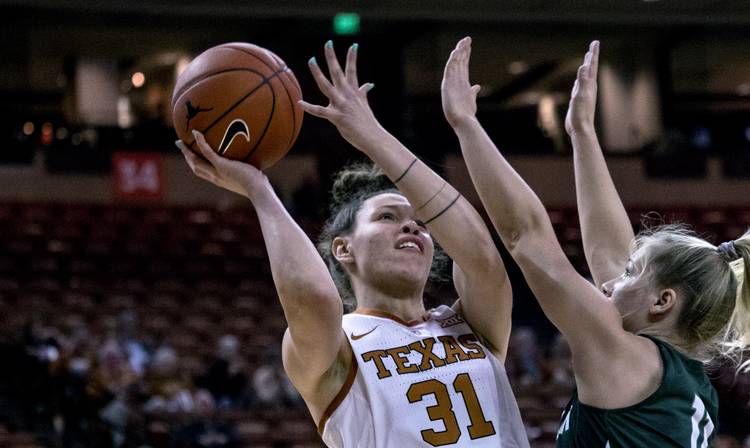 Texas' Audrey Warren goes up for a shot against Stetson's Addi Walters during the first half of UT's victory Sunday. [Rodolfo Gonzalez for STATESMAN]

During its drive to become an elite basketball team, Texas will occasionally play a head-scratching game that disappoints the most supportive fans.

But first the good news. The Longhorns received a game-high 15 points from transfer Danni Williams and 13 points from freshman post Charli Collier during a 65-46 victory over Stetson on Sunday afternoon at the Erwin Center.

“Anytime you get a W, it’s a good thing,” coach Karen Aston said.

Now the bad news. The Longhorns committed 26 turnovers against a squad that was neither quick nor athletic. They also had trouble shooting, hitting 3 of their 21 shots from behind the 3-point line.

“We’re not a great basketball team right now,” Aston said. “We have a lot holes we have to fill. It’s part of the process to figure out what are your holes and what you need to get better at. You go to work, and you try to get better at it.”

Texas, though, still showed some positive fire, outrebounding the Hatters 46-18. That helped the Longhorns earn a 34-16 edge on points in the paint.

Junior forward Joyner Holmes, who had surgery on her right ankle in October, started for the first time this season. She collected six points and six rebounds.

Team leader Sug Sutton was obviously not satisfied with the overall performance, saying she would give the Longhorns a D or a D-minus Sunday. Yet the junior point guard from St. Louis said the team should improve by the time it opens Big 12 action Jan. 2 with a home game against Oklahoma State.

“I’m taking it day by day,” she said. “This is a new team with some new faces. Personally, I have to lead the team. … If we take it day by day, we’re going to be fine.”

Texas (8-2) was never in danger of losing the game. The Longhorns led 27-19 at halftime and led by double digits for most of the second half. The Longhorns got hot in the fourth quarter, hitting 9 of 12 shots to pull away, finishing at 42.4 percent for the game.

Williams, a graduate student who played the past three years at Texas A&M, continues to improve in burnt orange. She gave credit to her teammates for being supportive during the early part of the year, saying they encouraged her to keep shooting.

“I’m happy to be here,” she said. “I can’t wait to get conference started.”

Stetson (1-8) was led by sophomore forward Day’Neshia Banks, who came off the bench to record a team-high 14 points and five boards.

Next up for Texas is a date with Texas-Rio Grande Valley at 7 p.m. Thursday in Edinburg. The Horns will then take a Christmas break and return to face Northwestern State in the final nonconference game of the season Dec. 29 at the Erwin Center.