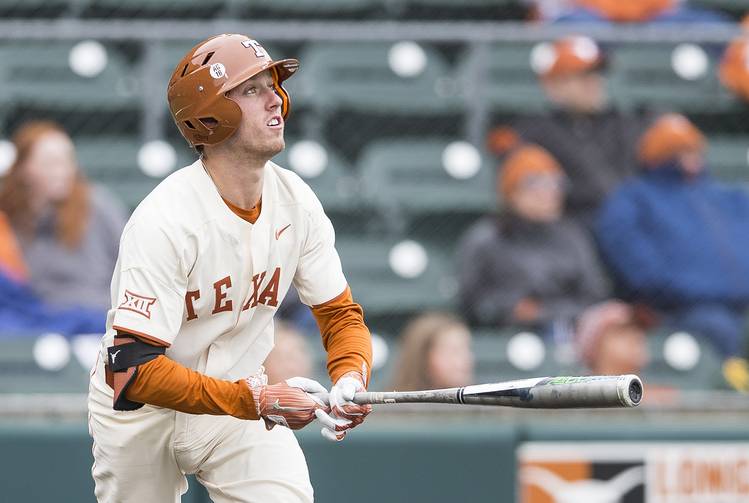 Shugart turned in a career-best performance at UFCU Disch-Falk Field as Texas (21-12) improved to 8-3 in Big 12 play with a 2-0 win over Baylor.  In UT’s fourth shutout of the season — and Shugart’s ninth appearance — the junior right-hander called his pitches for the first time since his freshman year.

“Putting ownership of me being on the win or loss side of it, I didn’t have that mentality the past couple outings,” said Shugart, who worked with catcher DJ Petrinsky on Saturday. “I really feel like it worked out well today, even with the conditions.”

Texas’ weekend rotation was coming off a trip to Kansas State in which Shugart, Nolan Kingham and Blair Henley combined for 11 1/3 innings in their three starts. On Wednesday, Henley told reporters that head coach David Pierce’s “message was that we were awful, and we deserved it.” Two days later, Kingham was pulled in the third inning of a 9-5 win over the Bears.

Shugart, however, allowed five hits and five walks over Saturday’s seven shutout innings. Baylor (14-15, 3-8) loaded the bases twice, but Shugart escaped those third- and fourth-inning jams. A reliever over his first two years at Texas, he threw a career-high 120 pitches against the Bears.

“When we needed a pitching performance, we got it,” Pierce said. “It wasn’t perfect, but Chase did a great job of attacking the zone, especially making some pitches when they had some traffic.”

Shugart was backed by a defense that turned two double plays and made only its fifth error in Big 12 play. UT’s offense produced six hits, two of which belonged to junior Kody Clemens. Named a midseason All-American by D1Baseball and Perfect Game/Rawlings this week, Clemens burnished his candidacy Saturday.

In the first inning, Clemens gave UT an early edge with a homer to right field. Texas scored its other run when the Bears threw away a grounder off Clemens’ bat in the third inning.

Around the bases: Wearing a “Punters are people too” T-shirt in 41-degree weather, Michael Dickson delivered a strike for the ceremonial first pitch. Texas’ Ray Guy Award winner is looking to get picked in this month’s NFL Draft. … Zach Zubia went 1-for-3 and has reached base in 32 straight games. … Junior Andy McGuire earned his fourth save of the year. … Henley, who threw 47 pitches in a scheduled short start at Texas A&M-Corpus Christi on Tuesday, will be given the baseball for Sunday’s finale against Baylor.