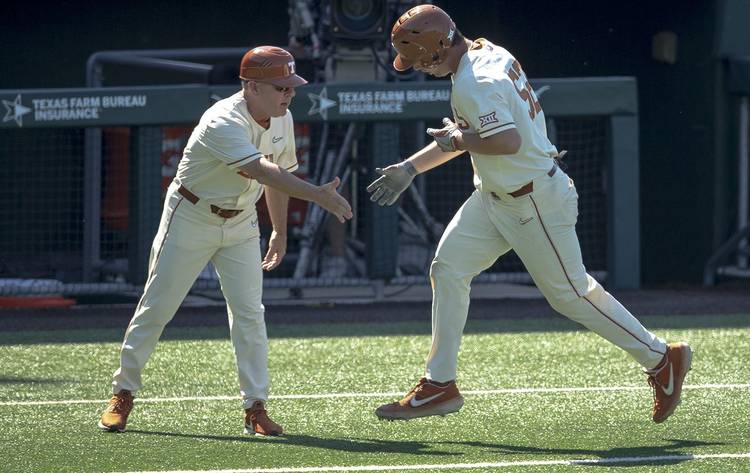 HOUSTON — Texas outfielder Austin Todd singled on the first pitch the Longhorns saw for the second night in a row on Saturday, but this time the Longhorns returned to their winning ways.

Facing No. 6 Arkansas in the Shriners Hospitals for Children College Classic, Texas jumped on the Razorbacks early and never surrendered the lead. Both Texas and Arkansas came into the tournament unbeaten but fell to LSU and Oklahoma respectively on Day 1.

In the end it was the Longhorns who came out on top, fighting off an Arkansas comeback attempt that went down to the very last out of the ninth inning to preserve a 8-7 victory.

“I think that we did a good job early in the game,” infielder Zach Zubia said. “I think later in the game we got a little outside of our approach, trying to do too much maybe, just a little bit. It just all comes with the learning curve. We say failure isn’t actual failure unless you learn from it.”

Starting pitcher Ty Madden, making his first appearance following a 2-1 complete game victory over Boise State on Feb. 22, continued to flash strong stuff. He struck out four hitters in the first two innings, and struck out seven total while giving up three runs over six innings.

The offense gave Madden plenty of run support, Todd scoring a run and Zubia adding a RBI single to put Texas up 2-0 after the first.

In the second inning, Texas broke the game open.

The Longhorns’ bottom order recorded three straight singles and a walk to add another run and load the bases with nobody out. Arkansas starter Patrick Wicklander lasted one inning, gave up five hits, six runs and four earned runs. His reliever, Marshall Denton, last only one inning as well and gave up two more runs.

Zubia once again brought the power, crushing a two-run home run to left center field, just his second home run of the season. He would finish 3-for-4 with a team- leading three RBIs.

“Bolden just kind of snuck the fastball by us and mixed his pitches really well,” UT coach David Pierce said. “I don’t know if we got complacent right there, but they did a good job of working themselves back in the game and making it a thriller right there.”

The Razorbacks broke through with a RBI single from Zack Gregory and added two more runs with a Heston Kjerstad home run and a Robert Moore RBI double in the sixth. Texas pulled Madden going into the seventh and Arkansas jumped on reliever Cole Quintanilla, scoring two more runs and chasing him after just one-third of an inning.

Down only three runs, Arkansas reliever Jacob Burton continued the momentum, striking out the side in the seventh and giving up no hits over two innings.

Tension reached its maximum point in the top of the ninth as designated hitter Matt Goodheart cut the Arkansas deficit to just one run with a two-run shot. Still, Andre Duplantier III came into the contest to close out the game, preserving the one-run victory.

“I think it shows we’re pretty resilient,” Zubia said. “We can play many different ball games, whether it’s hit the ball out of the park or run em over and hit em in. That’s the key to our team.”