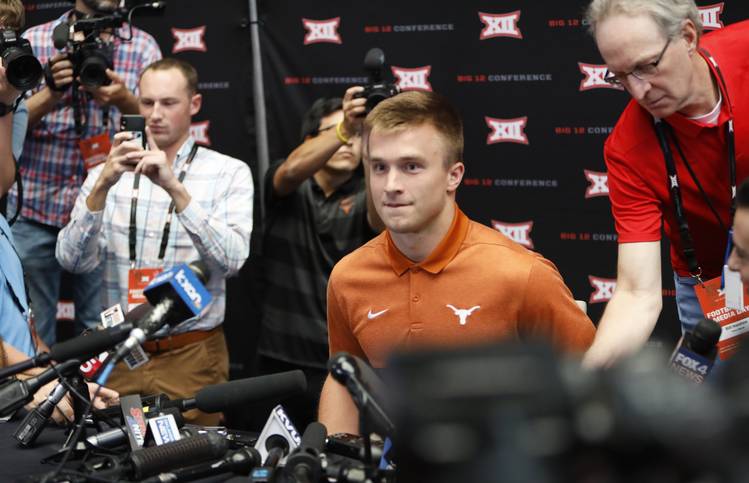 ARLINGTON — Almost 30 reporters and a dozen cameras crowded around a small platform Tuesday where Texas quarterback Sam Ehlinger was scheduled to appear at Big 12 media days.

Baker Mayfield never drew this kind of crowd. This was Vince and Colt-level hysteria, for those ink-stained wretches old enough to remember the halcyon media days.

At the appointed time, Ehlinger climbed into the hot seat and took 90 minutes worth of questions about the Longhorns, his Heisman Trophy chances and that unforgettable shout-out at the end of the Sugar Bowl. Football season, for all intents and purposes, is baaack.

“Look at him,” said defensive end Malcolm Roach, one of five other Longhorns that were brought to Arlington. “He’s the quarterback. Quarterback get all the girls.”

Such is the result of a 10-4 season capped by a Sugar Bowl win over Georgia. Over at SEC media days in Hoover, Ala., Georgia coach Kirby Smart said Tuesday that loss was something “we’re not proud of.”

Ah, if only the Bulldogs had cared.

“Don’t get me started,” Texas’ Tom Herman said from his platform at AT&T Stadium.

Surely, this perception that the Bulldogs didn’t care about the Sugar Bowl had to anger the Horns, right? “And it … ” Herman said before catching himself and thinking it through. “Next question.”

Texas is likely to take the next step in 2019 if Ehlinger continues his upward trajectory. His confidence rubs off on everyone inside the Moncrief-Neuhaus Athletic Center. Mayfield and Terry Bradshaw don’t inhabit that space, so as for their summertime comments bashing the quarterback, Herman said they were “irrelevant.”

Ehlinger said the Sugar Bowl win was a moment where the Horns now “understand as a program that we can compete with some of the best teams in the nation.”

“I think it’s hard for a lot of people to get out of their ruts and get out of lower times when you don’t have confidence in the fact you can do it,” he said.

Ehlinger has darn near bullet-proof confidence. But what about the rest of the offense? Who else should Texas fans be excited about? Listen close enough, and it’s hard not to think there’s a cache of weapons just waiting for deployment.

“I’m extremely excited about (running back) Keaontay Ingram,” Ehlinger said. “When you’re a true freshman it’s hard to fill your full potential. In the spring, he was killing it. I think he’s going to have a good year.”

Another freshman running back has already turned enough heads to think he’ll be Ingram’s backup. “The emergence of Jordan Whittington has been remarkable,” Herman said.

Make no mistake, Texas is still going to have an offense with a pro-style philosophical bent. Herman believes in a balanced attack, although with Ehlinger, he can utilize the quarterback in the run game more than some coaches might.

Texas badly needs more big plays this season. The Longhorns were the only Power 5 team in the nation last season without an offensive play that went 50 yards or more.

“Last year, if we broke a run, it was going to be for a 12-yard gain,” Herman said. “I think this year if we break a run, it’s got a chance to go the distance.”

Collin Johnson is the top receiving threat after a junior season where he caught 68 passes for 985 yards, 15 shy of the all-important 1,000-yard mark. But there are plenty of other threats even though Lil’Jordan Humphrey went pro and Bru McCoy transferred back to USC.

Freshman Jake Smith will no doubt dazzle onlookers when training camp begins on Aug. 2. Jordan Pouncey is being overlooked after redshirting last season. Cade Brewer and Reese Leitao will get full looks now that veteran tight end Andrew Beck is gone. The only bad news was that wideout Al’Vonte Woodard will miss a majority of the season with a fractured foot.

“We’ve got to do a better job of connecting with Devin Duvernay and the Z receiver, him and Brennan (Eagles) especially, because they have elite speed,” Herman said.

Senior center Zach Shackelford is more concerned about the overall style of play that necessarily who is playing and hopefully scoring.

“I just want us to be physical,” Shackelford said. “Just play the game the way it’s supposed to be play and have fun doing it. Don’t get caught up in all the hype and stuff. That’s when we play our best.”

Herman already said this spring Texas needs to take the next step and win a Big 12 championship. To get there, the Horns should keep doing what they’re doing already.

Several players continued last year’s theme of going 1-0 each and every day. “We don’t take days off. It’s fourth-and-inches every time you walk into that building,” Herman said, echoing a critical theme from his first day on the job.

The Horns themselves now fully believe in Herman’s methods. That’s what a Sugar Bowl win can do for one’s program. Now, outsiders are coming out of the woodwork to bash Texas and the Horns Down, the upside-down “Hook ’em” hand sign, is going mainstream. “We must be doing something right,” Roach said.

The coach sure thinks so.

Indeed, that’s true. It would appear the 2018 season has given birth to a whole new Texas future.