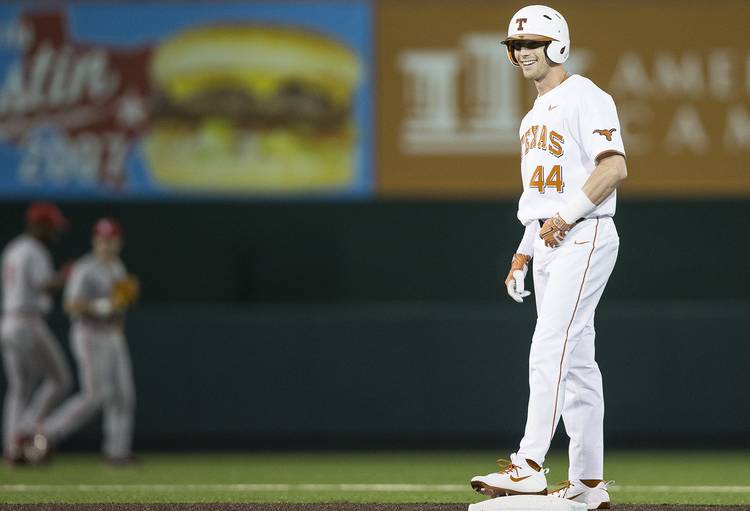 He didn’t hit one while playing with the Austin Banditos during his youth. That feat was never accomplished over three years of varsity baseball at Round Rock High School. The only home run that Todd hit over his first 49 games at Texas was a third-inning shot in a 2017 game against TCU.

Well, there’s a first time for everything.

Todd hit a two-run home run in the bottom of the ninth inning to lift the Longhorns to a 5-3 win over Louisiana-Lafayette on Saturday. Texas trailed by a run as it entered its final at-bat at UFCU Disch-Falk Field, but a three-run rally improved the Longhorns’ record to 2-0.

“It’s probably one of the greatest feelings I’ve ever had playing baseball,” Todd said.

During a postgame interview, teammate Josh Sawyer shoved a pie made of shaving cream in Todd’s face.

Todd’s heroics almost weren’t needed, but Louisiana-Lafayette scored twice against UT closer Beau Ridgeway in the top of the ninth inning. The Ragin’ Cajuns (0-2) then turned the ball over to senior Dylan Moore, who was looking for his 39th career save.

Hitting ninth in Texas’ order, Duke Ellis caromed a single off Moore. David Hamilton’s bunt moved Ellis to second base, and Masen Hibbeler came through with a game-tying single.

Hibbeler was then thrown out while trying to take third base on a passed ball. That play, though, came on the fourth pitch of an intentional walk to Kody Clemens, who had driven in UT’s first two runs. Todd took note of Louisiana-Lafayette’s decision to pitch to him instead of Clemens.

“I love when I have to play with a chip on my shoulder,” Todd said. “People, they don’t respect what I can do. It kind of gets me fired up.”

On the second pitch of his at-bat, Todd received a “beach ball” from Moore. Todd hammered the fastball over the fence in left field. It was the first walk-off homer for Texas since Clemens beat TCU at the 2016 Big 12 Tournament.

Todd has been Texas’ cleanup hitter and right fielder this year, and coach David Pierce said, “He’s got a chance to be an all-package type of player as his body continues to mature.” Todd hit .276 with 19 RBIs during his freshman year.

“He’s quick like the top and powerful like the middle of the order should be,” said Hibbeler, who recorded three hits for a second straight game. “That’s how a lot of our guys are in the lineup.”

Ridgeway was credited with the win, but junior Chase Shugart delivered the afternoon’s key performance on the mound. A reliever through his first two years at Texas, Shugart allowed three hits and an unearned run over 6 2/3 innings in his first collegiate start. On his 83th and final pitch, Shugart recorded his third strikeout with a 92 mph fastball.

Around the bases: Texas designated hitter Jake McKenzie is listed as day-to-day after he injured his shoulder on a head-first slide into first base. … Hamilton stole two bases and scored twice for the Longhorns. … After getting hit by two pitches in Friday’s opener, Ryan Reynolds was plunked by a second-inning offering Saturday. In 60 games last season, Reynolds was hit by six pitches. … Saturday’s game was played in front of an announced crowd of 5,330.