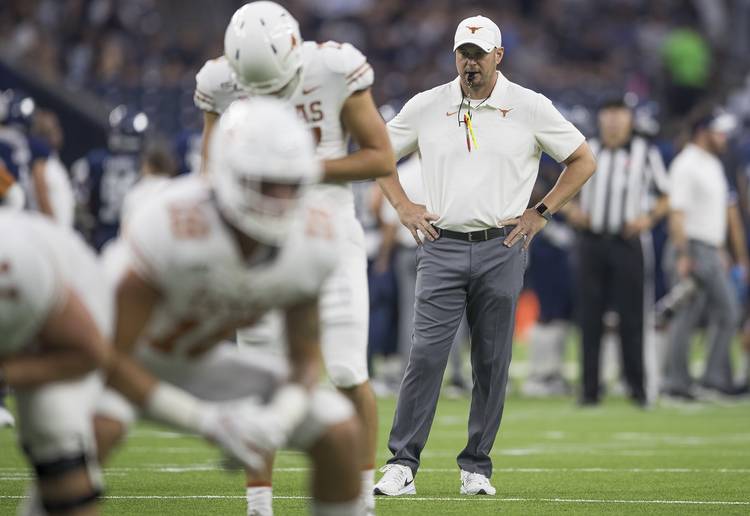 Texas coach Tom Herman looks on during warm-ups before a game against Rice at NRG Stadium in Houston on Sept. 14, 2019. [RICARDO B. BRAZZIELL/AMERICAN-STATESMAN]

HOUSTON — At the start of Texas’ 48-13 rout of Rice on Saturday night, Longhorns head coach Tom Herman did something he had never done before.

After winning the coin toss with a call of heads, Herman opted to receive the ball to start the game.

This is the first coin toss Texas has won this season. But the Longhorns won 16 tosses during the 2017 and 2018 seasons. They deferred to the second half all 16 times. When Herman was Houston’s head coach in 2015 and 2016, he also deferred on all 15 coin tosses the Cougars won.

At his post-game press conference, Herman said he chose to take the football for a couple of reasons. Since it was expected that UT would win handily, he wanted an extra first-half series for his first-string offense. Rice also operates a run-heavy attack, so Herman was weary of a scenario in which the Owls opened the game with a time-consuming drive while his offense cooled on the sideline.

“I thought it was a good decision,” Herman said. “The whole staff was involved in it. Credit the kids too for going out and taking that drive down and scoring with it.”

Running back Keaontay Ingram, who touched the ball on UT’s first five plays, said the Longhorns got a feel for Rice and the game’s rhythm on that opening possession.

Smith scored on 53- and 12-yard catches in the first half. That marked the seventh time in school history that a freshman has caught two touchdown passes in a single game. Collin Johnson last accomplished that feat in 2016 at Texas Tech.

Through three games, Smith has turned three of his 11 receptions into touchdowns. As he continues to adapt to college football, Smith said his “confidence is steadily rising.”

“Football just feels like football to me,” Smith said. “I was kind of surprised the first game how I was expecting something so much different. At the end of the day, it’s just football, the game I’ve been playing for so long.”

Special notes: Texas ended both halves with a noteworthy play on special teams. Sophomore Cameron Dicker booted a 57-yard field goal to give the Longhorns a 31-0 lead at halftime. In the fourth quarter, Houston native D’Shawn Jamison took a kickoff back 98 yards for a touchdown.

Jamison’s touchdown was Texas’ first kickoff return for a touchdown since D.J. Monroe returned one against Oklahoma State in 2012. In last year’s 19-14 win at Kansas State, Jamison returned a punt 90 yards for a score.

Dicker’s field goal tied for the seventh-longest in school history, and it bettered his previous career high by five yards. His kick came one week after coaches had second thoughts about having Dicker try a 58-yard attempt against LSU.