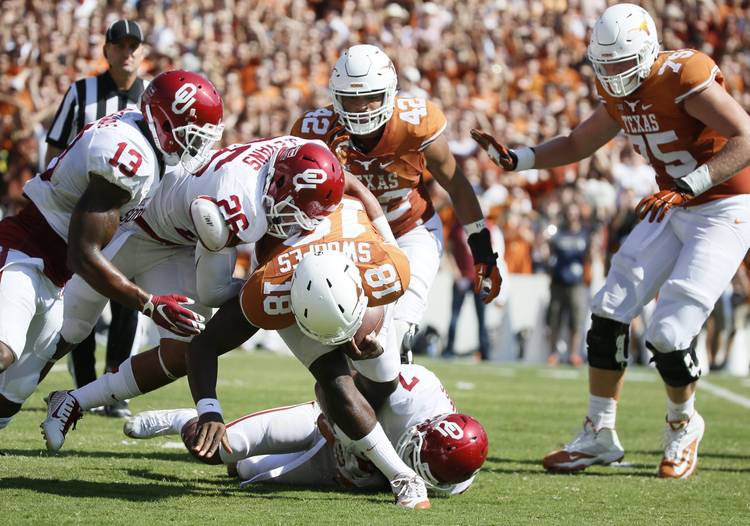 Texas quarterback Tyrone Swoopes fights through tackles into the endzone for a Longhorns touchdown. Texas led Oklahoma 14-0 in the first quarter of the Red River Showdown held at the Cotton Bowl in Dallas, TX. RICARDO BRAZZIELL/AUSTIN AMERICAN-STATESMAN

DALLAS — For most of his life, Texas’ 18 Wheeler has parked at the State Fair and climbed out for an afternoon of fun.

That is the setting of many of Tyrone Swoopes’ fond childhood memories. And also two of his better games as a Longhorn, including Saturday’s 24-17 stunner over Oklahoma, when he expanded his role as a short-yardage quarterback with touchdowns rushing and passing.

The package designed for Jerrod Heard’s understudy has no name, at least not one anyone in the program is willing to reveal publicly. Fans have dubbed it the 18 Wheeler, a play on Swoopes’ jersey number as well as his newfound downhill running style.

Discarded as the starter after a listless effort at Notre Dame, Swoopes refuses to go away silently, and his touchdown celebrations on Saturday seemed to electrify a sideline that was already determined to disprove critics who had spent the previous week burying them. Swoopes’ participation in the running game may be the best thing the Longhorns’ offense has going for it entering the second half of the season.

“He was fabulous today,” said play-caller Jay Norvell. “It’s all about his attitude. We tell these guys that, hey, you might not be starting, but you have a contribution to the team.”

Swoopes totaled 14 yards on four carries. He attempted one pass, and completed it to Caleb Bluiett for a fourth-quarter touchdown.

Driving to go ahead 14-0, Swoopes entered for the first time on third-and-1 and powered forward for seven yards. Head coach Charlie Strong, who typically does not interfere with offensive matters, got on his headset with a clear directive for Norvell.

“I said, ‘Repeat that play. Run it again, run it again,” Strong said.

And Swoopes did, picking up four yards, then plunging in from the 3 and celebrating with patrons in the north end zone.

It was reminiscent of two weeks earlier against Oklahoma State when Swoopes carried three times for 35 yards and a touchdown.

Growing up north of Dallas in Whitewright, Swoopes came to the State Fair to ride the ferris wheel and eat funnel cakes. It’s what he remembered best until last year when he made his debut in this rivalry and engineered two fourth-quarter touchdown drives, leaving Texas within five points of an upset. A first-half pick-six notwithstanding, Swoopes was on point all day long, totaling 334 yards and two touchdowns on 27 completions. He also ran for a score and 50 yards.

“The atmosphere is totally different,” Swoopes said of the rivalry game. “I think it brings out something in everyone.”

In many ways, 2014 was a moral victory for Swoopes and Texas. But only an actual win would be good enough this time around with the possibility of a 1-5 start looming and with the heat increasing on Strong.

There was a true sense that Texas, a 17-point underdog, would pull it off when Swoopes executed a beautiful pop-pass from the 2 early in the fourth quarter. Andrew Beck was open short, and Bluiett deep. Swoopes chose Bluiett, a former defensive end, for the 24-10 lead and then raced down the sideline smacking every hand in sight.

“Spur of the moment,” Swoopes said. “It was good for a game like this.”