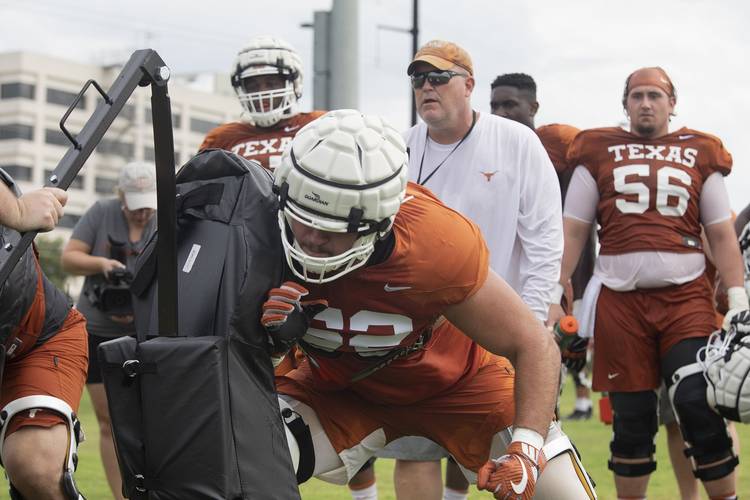 Herb Hand’s first challenge every season is to rewire how an offensive lineman thinks.

“For most of the life of an offensive lineman, they’ve always been the biggest people in their class,” the Texas offensive line coach said. Growing up, big kids always hear people say, “Hey, go easy, you’re bigger than them. Go easy. Don’t hurt them. Go easy,” Hand said.

At Texas, Hand wants his linemen to be as physical and nasty as possible. Go hard.

“Sometimes, though, you gotta gear that into them,” Hand said, “and then it takes a little bit of time for them to give themselves permission to be a prick.”

Samuel Cosmi figured that out long ago. How else can you explain how he logged more than 1,000 snaps last season as a redshirt freshman? Hand was so pleased, he’s moving the 6-7, 300-pounder from Humble Atascocita to left tackle, historically the nastiest position on the field.

Texas fans probably can’t appreciate how well the offensive line did last season. Graduate transfer Calvin Anderson played 1,044 out of 1,045 plays. That one missing snap? “His shoe came off, and I can’t remember if it was Southern Cal or TCU,” Hand said.

Cosmi played the majority of the year at right tackle “other than the 20 or so plays that Derek Kerstetter played in the Maryland game,” Hand said.

All in, that’s four players who got more than 1,000 plays in 2018. That’s incredible durability in a unit prone to ankle and knee injuries, random pileups and who knows what else.

“If you keep your feet moving on a play, don’t stand around piles, you’re always working, you know, that type of thing, very rarely do you get rolled up,” Hand said.

Now, Anderson is off doing his parlor trick of solving a Rubik’s Cube behind his back for the New York Jets. That leaves a glaring hole at a position that protects quarterback Sam Ehlinger’s blind side.

It’s a natural opening for Cosmi, a sophomore who could be a long-term starter. This coaching staff has waited years for this moment, too.

Cosmi originally committed to coach Tom Herman’s staff at Houston in June 2016. At the time, he was like every high school offensive lineman — too lean for the college grind but with an excellent frame to build muscle mass. He weighed about 260 pounds.

Cosmi followed the Houston coaches to Texas and committed to UT in January 2017. He redshirted that season, worked with strength coach Yancy McKnight and nutritionist Amy Culp, and now looks like a poster child for Big 12 offensive linemen.

“The weight I got to wasn’t because I just shoved a bunch of crap down my throat,” Cosmi said.

Cosmi said he had honest talks with McKnight, and the two set out a plan. It worked because, Cosmi said, “he respected me enough that he knew I wanted to get somewhere and how I wanted to get there was the right way.

“I told him that from day one, ‘Coach, I know I’m light, a little light in the ass,’” Cosmi said. “But I don’t want to be a lineman that can’t move or do anything like that. So I want to be able to put on the right weight and be one of the strongest guys on the team, at the same time, one of the fastest big guys on our team. I think I’m able to do that.”

Cosmi earned honorable mention status last season for Big 12 offensive freshman of the year, a clear sign he was on opposing teams’ radars. Flipping him to left tackle from right tackle means it’s almost like “flipping in your mind” how you work and communicate with the guards.

“Being left tackle is (the quarterback’s) blind side and you have to be dang close to being perfect,” Cosmi said.

In practices this week, Cosmi worked alongside left guard Junior Angilau and veteran center Zach Shackelford. Kerstetter and Denzel Okafor held down the right side. It’s not worth getting engrossed in depth chart maneuverings yet, as Hand loves to train players at multiple positions.

Graduate transfer Parker Braun is expected to work his way into the starting lineup. However, Hand said Braun is learning a whole different system from what he played in at Georgia Tech.

“We’re asking him to do different things from a technique and fundamental standpoint,” Hand said. “And so it takes time to train those things.”

The Longhorns might prefer if Braun fits in beside Cosmi. As Ingram said, “Aw, man, he makes everybody look good.”

“Having that guy right there, you don’t have to worry about anything,” Ingram said. “He works hard; he takes care of us. We talk every single day. He’s not just a football friend, but he’s an off-the-field friend. I feel like that’s a long way to go, man. He’s just an overall guy.”