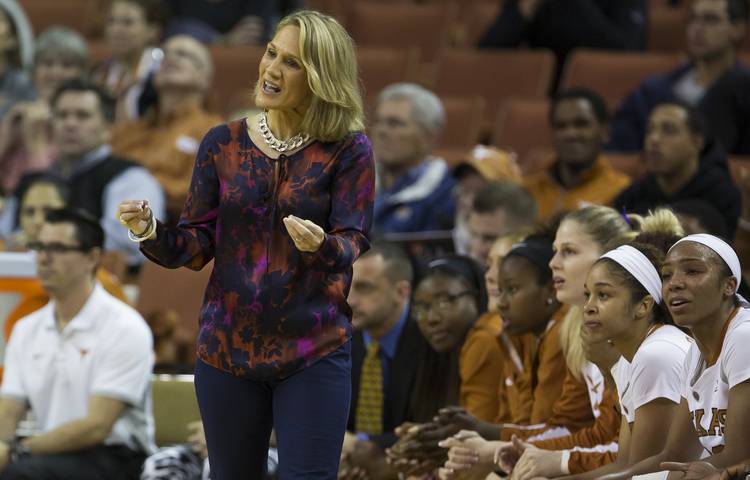 Texas's head coach Karen Aston against Mississippi State during the first half of an NCAA women's college basketball game at the Frank Erwin Center in Austin, Tex., Wednesday, Dec. 2, 2015. RICARDO B. BRAZZIELL/AMERICAN-STATESMAN

If Karen Aston and the Longhorns have learned anything from navigating through the first half of the Big 12 schedule, it’s that Texas enjoys the comforts of home.

Aston, in her sixth season as UT’s coach, describes the Erwin Center as “the friendly confines.” Their only home blemish was the 75-71 loss to top-ranked UConn, a game many consider the team’s high point so far.

Texas’ season goals are still in sight. But beginning Wednesday night in Lawrence, the No. 8-ranked Longhorns (16-4, 7-2 Big 12) need to become road warriors to reach them.

Texas has nine regular-season games to play — four on the road, five at home. The toughest tests are away games at No. 21 West Virginia and No. 23 Oklahoma State, and the circle-the-calendar home game is Feb. 19 against No. 3 Baylor.

“We need to lace up our shoes and make sure we’re as competitive on the road as we are at home,” Aston said. “That’s been a little bit of the personality of this team.”

Still, Texas should still be in position to earn a top seed in the NCAA Tournament. The Longhorns, ranked No. 8 in this week’s Associated Press poll, certainly should be a top-4 seed and play host to a pair of early-round tournament games. This week ESPN’s bracketology has them as a No. 3 seed in the Albany (N.Y.) region alongside UConn.

The biggest disappointment for Texas thus far has been the freshmen, a signing class that was ranked No. 3 in the nation. Aston said Destiny Littleton, Rellah Boothe and Chasity Patterson might still make an impact before the season is over. Collectively, the freshmen average a combined six points through 20 games.

“I thought there was a place for their skill set,” said Aston, adding all three have suffered through personal and health setbacks.

With one eye looking back, here are the good, bad and notables of the first half of the Big 12 season:

The 6-7 junior center should be considered for national player of the honors too. Seemingly unstoppable — especially when she plays Texas — Brown ranks No. 1 in the country in field goal percentage (69.1). As for league play she is No. 2 in scoring (21.3 ppg.) and No. 3 in rebounding (9.6 rpg.).

During a four-day stretch earlier this month, TCU knocked off No. 7 Texas 79-77 and West Virginia 76-74 in overtime. Now on a six-game winning streak, the Frogs could easily earn a berth in the NCAA Tournament. She relies heavily on a pair of Central Texas products — Stony Point’s Jordan Moore averages 14 points and 7.4 rebounds while Bowie’s Kianna Ray chips in 9 points per game.

In an otherwise forgettable season for OU, the Sooners guard ranks second in the nation in field goal percentage for freshmen (51.7). She has averaged 19 points over her last four games and has been named the Big 12’s freshman of the week three times.

Playing alongside All-Big 12 guards Ariel Atkins and Brooke McCarty, few would have predicted Higgs would lead the Longhorns in scoring (15 ppg) and field-goal percentage (58.3). After only making three starts in her first two years, she has started 19 of UT’s 20 games this season.

Last year as a sophomore, Cox started just one game and averaged 7.6 points and 4.0 rebounds. Now the 6-4 forward is up to 15.1 points and 9.9 rebounds and leads the conference with 54 blocked shots.