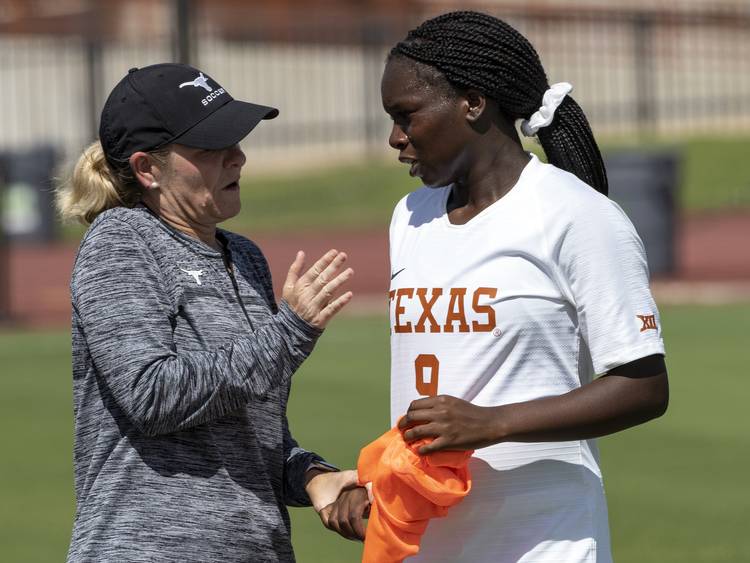 Texas head coach, Angela Kelly, speaks with Teni Akindoju, (9), after coming out of the game against Grambling State during a non-conference NCAA Soccer match held at Mike A. Myers Stadium, in Austin, Tx., on Sunday, Sept. 22, 2019. (©Rodolfo Gonzalez/ FOR STATESMAN)

Texas sophomore Carlee Allen barely had time to celebrate before she was engulfed in a mass of humanity.

Teni Akindoju got there first, followed by Cameron Brooks and Mackenzie McFarland. Soon, no fewer than seven teammates had Allen wrapped up. The match had long been decided, as Allen’s became the sixth goal in an 8-0 win over Grambling State, but the significance was not lost on her teammates. It was the first goal of her Texas career.

Nine matches into a season that’s already had ups and downs, finding those moments to celebrate have been crucial to building confidence.

Texas (5-4) begins Big 12 play in Lawrence, Kan., with a nationally-televised match Thursday night against 17th-ranked Kansas (8-2) on Fox Sports 1. The past two seasons, the Longhorns entered their conference slate undefeated.

“Every team deals with this,” Texas coach Angela Kelly said. “We graduated five starters. These young people are stepping into a role and at the beginning of the season, the load is high. We scheduled tough opponents on the road, and they were challenged. There’s a lot more going on than the tactics and execution.”

Allen, who went to nearby Lake Travis High School and played for Lonestar Soccer Club, is one of eight Longhorns who have made their first career starts this season. She has started every match in the center of midfield, an opportunity that has been as exciting as it’s been eye-opening.

For the first time, she’s been given the task of leading players who are older and more accomplished.

“Usually in club, I was focused on my job and getting my role done,” she said. “Making sure that those around me are doing the right thing, and expressing that while everything is happening in the middle has been a little difficult.”

Allen has earned high praise from Kelly, as have midfielder Kailey Smith and right back Maddie Dorsett, who went from never starting to cracking the lineup in all but two games. Brooks (Cedar Ridge/Lonestar), Akindoju, Peyton McGee, Sydnee Nobles and Savannah Madden have all started for the first time.

But as seasoned attackers Haley Berg, Cyera Hintzen and Julia Grosso continue to rack up goals and assists — 27 combined — it’s clear that the young midfield and defense hold the key to success. In four losses, Texas has allowed 10 goals. The veterans are staying patient.

“They’ve done a really good job stepping up,” said Berg, who has six goals and five assists. “We have learned to trust each other more than in the beginning and the trust is building more and more. They’re taking on a big role and doing it really well.”

Texas has shown glimpses of its potential, most notably in a 2-0 win over Washington that marked the team’s second straight shutout. Frustrating home losses to Monmouth (4-0) and Providence (1-0 in overtime) followed, but everything seemed to click against Grambling as six different players found the score sheet.

“We’re coming off some tough losses, so for our group that’s the biggest thing,” Dorsett said. “It’s very easy to get in your own head and get down, but we definitely made a statement (against Grambling). We realize that conference is coming up and we have a clean slate. We can move forward from this.”

Reinforcements are on the way, too. Junior winger Cydney Billups and left back Emma Jett have returned from early-season absences, and Hintzen is available after missing the past three games with a head injury she suffered against Washington. Meanwhile, junior midfielder Emily Strouphauer (Cedar Ridge/Lonestar) is getting closer to making her return from a knee injury.

Kelly wanted her team to be tested in the non-conference, and she got her wish. Attrition and injuries might have made things more difficult than expected, but the Longhorns hope those scars have made them tougher. After the Jayhawks, Texas travels to face Kansas State on Sunday before returning home for matches against TCU and West Virginia the following week.

“We got exposed in ways that had we not learned that lesson, maybe a conference opponent would,” Kelly said. “We’re not gonna let that happen.”