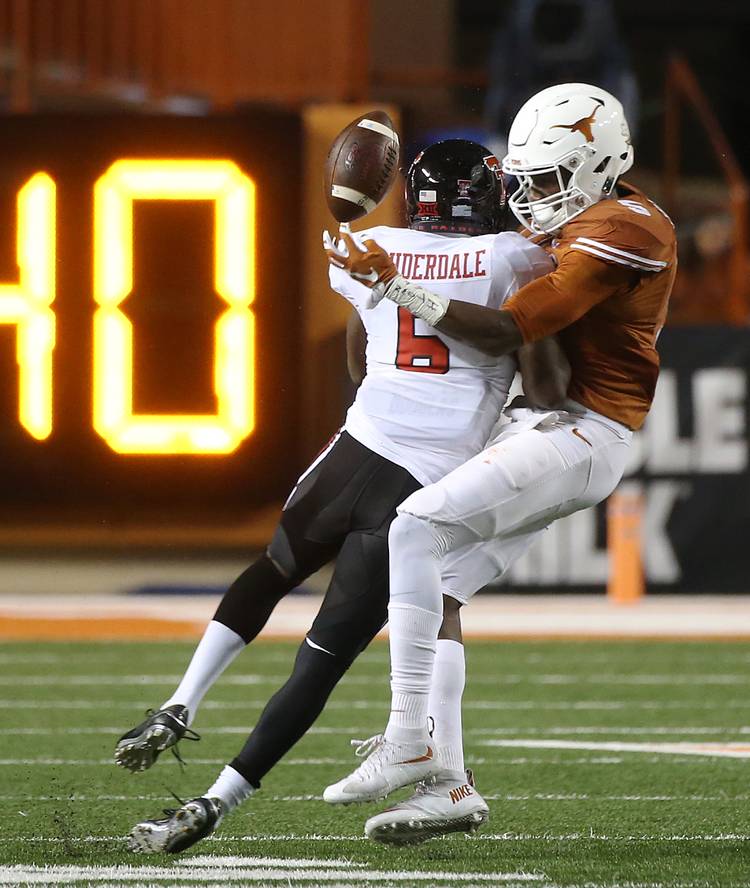 Texas's Holton Hill has the ball knocked away after nearly completing an interception against Texas Tech's Devin Lauderdale during the first half at Royal Memorial Stadium on Thursday, November 26, 2015. DEBORAH CANNON / AMERICAN-STATESMAN

The Tech senior was in the right spot at the right time for his first — but perhaps, not funkiest — touchdown of the night to go up 7-3. It happened after Texas’ Holton Hill couldn’t put away an easy interception and got smoked by Tech’s Devin Lauderdale. Grant, trailing the play, grabbed the ball from the sky and raced 65 yards. FS1’s Tim Brando sang, “Jakeem Grant, hello, how do you do? Richochet U.” Brando added, “That’s borderline immaculate reception.”

Grant hinted at divine intervention, as well, saying his catch was blessed “by the hand of God.” He finished the night as Tech’s all-time leader in receiving yards, passing Michael Crabtree.

Emotions were coming out from everywhere after Caleb Bluiett’s lost fumble before halftime. Bluiett was ruled down, but video clearly showed he wasn’t and the officials overturned the call.

He was upset, ripping off his helmet and finding a seat on the bench.

Tech took over at UT’s 34-yard line and scored five plays later on Pat Mahomes’ keeper at the goal line. Mahomes turned to Texas’ players and flexed, which incited a Twitter blast from Quandre Diggs.

Brando didn’t like it, either, saying, “beware of the muscle flexers. That could get you a little yellow hanky.”

Diggs softened his stance, tweeting later that Mahomes “is a tough dude and great competitor!!”

Nothing against Mahomes he a tough dude and great competitor!! Made big time plays tonight and you can only respect that!

Who would have guessed the player having most fun right now would be the quarterback who was demoted?

Tyrone Swoopes, Texas’ hype man on offense, fired up his teammates after he gave Texas a fourth-quarter lead on a 46-yard untouched run. First, he imitated Michigan State’s Michael Geiger, doing the third base coach arm-circle celebration the Spartans kicker performed after beating Ohio State last week. Then Swoopes sprinted down the sideline, smiling wide and high-fiving everyone in sight.

Swoopes, who also scored on a one-yard plunge, has 11 rushing touchdowns this fall for half of the team’s 22.

Because of Jerrod Heard’s concussion, Swoopes may end up starting Texas’ first and last games and none in between. The Longhorns close at Baylor on Dec. 5.

But Swoopes does not escape blame here.

With three minutes to go, he came up empty on a throw deep on fourth-and-7 to Daje Johnson. Swoopes’ other options were slants to Marcus Johnson and John Burt, and though neither created much separation from his defender, they were safer options than the one Swoopes chose.

Brando criticized the decision. “Going for the home run ball when you need seven to move the chains with that much time left and where the ball is … curious decision.”

Also curious was a penalty against left tackle Connor Williams that wiped out an 8-yard gain by Burt on second down. Williams was flagged for illegal man down field, but he didn’t do much but float a couple  of yards and was away from the play.

Brando thought it was ticky-tack. “We’ve seen a lot worse in the zone read concepts.”

Instead of third-and-1, the chains were moved to second-and-14.

Recall in Play No. 1 how we said Grant’s deflected catch wasn’t his funkiest TD? It’s up for debate, but that title might go to his 40-yard run on a playground call with 2:41 to go.

Stacked up in victory formation, the 5-feet, 7-inch Grant crouched behind his linemen and took a quick handoff from Mahomes around the left end.

No one was expecting it, including Brando, who called it”flea-flicker, fumble-rooskie style.”

Actually, the play is “a midget play called Hook ’em,” according to Grant.

Finally realizing what was going on, cornerback Holton Hill raced to the sideline to cut off Grant but ran too far and set Grant free.