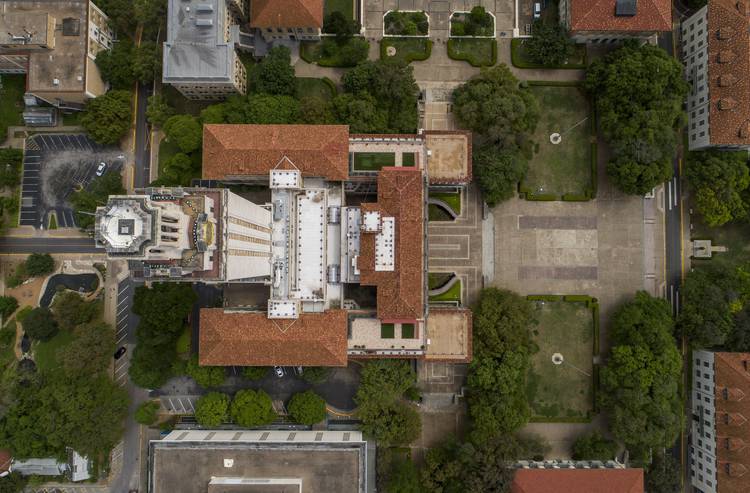 Monday was indeed an odd day at the University of Texas.

Students from all over the state, from all over the world, opened their laptops from home and logged into online classes. The South Mall was empty at lunch, the grass between the six pack of buildings was untouched. Jester Center was a ghost town. No business was conducted inside the McCombs School of Business, either.

“Today is the first day of the new normal for us,” the Texas football coach told reporters Monday on a teleconference from his home.

UT’s spring semester started up again in a virtual world, and the Longhorns now find themselves looking at each other through webcams attached to their computers. Zoom isn’t just a way to describe someone’s 40-yard dash anymore.

Herman then pivoted to the bigger picture in this COVID-19 pandemic. “For anybody that’s complaining about no practice or they want more meeting time, I don’t get that.”

During the hour-long teleconferenece, Herman outlined what the Horns’ daily schedule now looks like since the Big 12 tweaked its rules. The league sent new guidelines to teams late Sunday that allow for online team meetings.

However, no in-person meetings can be held through the rest of the spring semester. The Big 12 said it without actually saying it — spring football is indeed over.

Going forward, Herman said he’ll have staff meetings on Mondays, Wednesdays and Fridays. He’ll meet with the team on Tuesdays and Thursdays.

“(Tuesday) will be the first time that I’ve even gotten my face in front of the entire team,” Herman said. “Hopefully that goes off without too many hiccups.”

All virtual team activities, including film study, can be no more than two hours per week in all sports. Teams can also send workout clothing and equipment along with nutritional supplements, although Herman was a little unsure if that might be a slippery slope.

“You’re going to have a program sending Omaha Steaks every other day or something like that,” he said. NCAA rules have always been made to be broken. As of now, it’s unlikely Texas will send all 85 scholarship athletes a Peloton.

While that may seem funny, Herman was adamant there are players who need more help. Let’s say a Texas athlete receives a monthly scholarship check worth $2,000. That should be plenty while on campus. But if a parent has been laid off, Herman said, “Where do you think that $2,000 is going?”

What happens if an athlete gets injured? As anyone looking for medical treatment right now can attest, it’s tricky.

Quarterback Sam Ehlinger aggravated a rib injury during the final portion of offseason workouts, and Herman said the team captain was sidelined for two to three weeks. Ehlinger had to talk with a physician via Zoom, an online web meeting app.

Herman said the doctor asked Ehlinger to “push here, push there.” How do you feel?

“That was interesting,” the coach said.

Herman said linebackers Ayodele Adeoye and Marcus Tillman, nickel back B.J. Foster, defensive lineman Peter Mpagi and running back Derrian Brown all are making progress toward full health. However, none would play if a game was held today.

Nobody knows if games will be held in September, either.

Asked if he could imagine no football this fall, Herman told Austin-based TV reporters, “I couldn’t two weeks ago. I can now.”

Herman spoke with the local TV stations via webcast, mostly because TV stations need pictures. Newspaper reporters just need the words. Everybody needs information, of which there is little of the concrete variety at the moment.

“I’m talking to my colleagues, other head coaches, we all kind of hovered around (restarting in) mid-June to early July to have a first week in September start of the season,” Herman said. “I think the best plan of action right now is to be flexible.”

Herman stressed that team leadership will be more critical than ever. He praised Texas’ 10 position coaches, who act as infantrymen when it comes to getting the word out to players. But ultimately, it’s up to the players to follow their workout plans set forth by the staff far from Royal-Memorial Stadium.

“We’re in a shelter-in-place order right now in Austin,” Herman said, “so you’re not going to go out and throw the football. At some point, hopefully that will be lifted.”

At some point, hopefully things return back to normal.

“I’ll tell the guys how much I love ‘em and implore them to get used to this new normal,” Herman said.