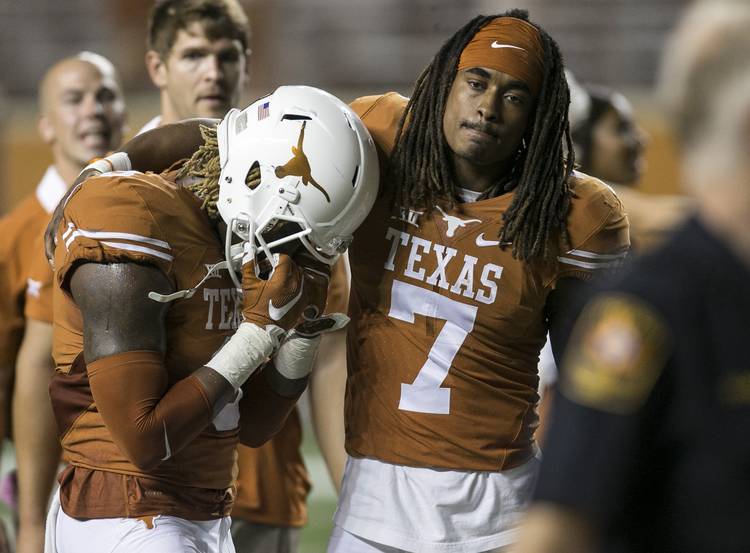 WHY TEXAS (1-2) LOST: Is it easy enough to just pin it on Nick Rose’s third career missed extra point? No. A successful kick at the end would have only sent this one into overtime. Texas lost because the defense had another long night, because the Longhorns allowed Cal to score 31 unanswered points, because Jerrod Heard made some freshman mistakes that will be overshadowed by his gaudy statistics and late-game heroics, and because the running game continues to struggle. Remember when we wondered whether Texas could even play its way into a shootout? Now we feel much better about the offense than we do the defense.

WHY CAL (3-0) WON: The Golden Bears had just as many turnovers as Texas, but did a better job of taking advantage of the Longhorns’ miscues. That was especially true at the end of the first half, when Cal regained momentum thanks to two scoring “drives” that produced 10 points in a span of 20 seconds. (There was a Heard interception in there.) At one point, there were five straight Cal scores — two short touchdown runs from Vic Enwere, a 34-yard field goal, a short touchdown pass, and Khalfani Muhammad’s big 74-yard touchdown run. Cal was outgained (650-548), out-rushed (286-280) and quarterback Jared Goff broke three school records on the night. Oh, and there was that missed extra point, too.

THE EYES OF TEXAS: … were on three specific Golden Bears — Goff, who had thrown a TD in 14 of his last 15 games and topped the 300-yard mark in each of the first two games; running back Daniel Lasco, a Texan who rushed for 1,100 yards last year; and wide receiver Trevor Davis, Cal’s big play threat. How’d they do? Goff, as mentioned previously, broke school marks for career passing yards, career offense and career completions. He was 27 of 37 for 268 yards and three TDs. Lasco did not play because of a strained hip muscle. And Davis had four, relatively quiet catches for 44 yards.

Offense — Heard, all the way. His 364 passing yards tied for the 10th best performance in school history, and the last time a Texas quarterback threw for 300 yards and rushed for 100 in the same game was Colt McCoy, back in 2009 against Texas A&M. And he had the first 100-yard rushing game for a freshman QB since Vince Young put up 163 against Nebraska in 2003.

Defense — Kevin Vaccaro took advantage of the first quarter ejection of safety Dylan Haines, tying for the team lead in tackles. He also took away a sure Cal touchdown by causing a fumble into the end zone. And he had a pass breakup. It was a performance that would’ve made big brother Kenny proud.

Cheers …
(1) It had been 68 games since a Texas quarterback threw for 300 yards and rushed for 100. Heard’s big-play legs and opportunistic arm rallied the Longhorns from 21 points down in the final quarter. Well, almost.
(2) Another big game for Daje Johnson. He didn’t need to get his mitts on a punt return to make an impact this time. He had back-to-back drops in the third quarter, but it’s hard to argue with his 145-yard receiving night.
(3) The defense allowed 45 points, but at least performed better on third downs. Cal was 5 of 13 on third-down conversions, a big improvement from what Notre Dame and Rice did against the Horns’ D.

Jeers …
(1) How ’bout that offensive line? Sedrick Flowers was flagged for a personal foul. Taylor Doyle was caught holding — twice. Kent Perkins had a holding call, too.
(2) Dylan Haines was ejected from the game after a helmet-to-helmet hit and subsequent targeting penalty in the first quarter. Vaccaro certainly picked up the slack, but not having Haines back there hurt.
(3) Nick Rose. It was a miss, not a block. Couple that with his tough third-attempt miss from 52 yards out at Notre Dame, and this has not been a kind start to the season for him.

Texcetera: Cal scored more points Saturday night than the Bears had in five previous games against Texas — combined (28). … Attendance: 91,568. … Let’s talk career highs. All-time marks were put up by Heard (passing yards, rushing yards, total offense), Johnson (receiving yards), Gray (receiving yards) and Vaccaro (tackles). … Johnson’s 145 yards were the most by a Texas WR since Wane McGarity’s 145-yard game vs. Rice back in 1998. … It had been 27 games since Texas had a 600-yard offensive night. In terms of total offense, this was the 10th best game in UT history. …. The Horns had 10 plays of 20 or more yards. … John Burt had a catch of 40 or more yards for his third straight game. … Goff is only two passing TDs away from catching former Cal QB Kyle Boller’s school record 64, and Kenny Lawler (6-79-2) moved into seventh place on Cal’s career receiving TDs list (19). … Cal, which was 2 for 2 on fourth downs, is 5 for 5 on the season. … The Bears have outscored opponents 49-0 in the third quarter. That included a 21-0 advantage against Texas.

On deck: No. 25 Oklahoma State (2:30 p.m. Saturday, DKR). The Cowboys (3-0) pasted UTSA on Saturday, 69-14. Things don’t get easier for Texas; after OSU, the Longhorns play three of their next four games away from Royal-Memorial Stadium. Texas leads the overall series, 24-5 and won last year’s game fairly easily; the Cowboys are 4-14 when this game is played in Austin.

Bests & Worsts of Texas vs. Cal