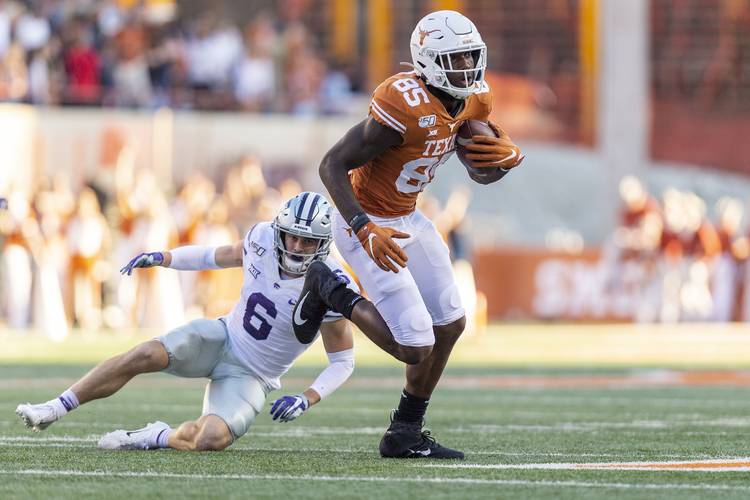 1. Can Texas avoid a slow start?

At his weekly press conference on Monday, head coach Tom Herman side-stepped a question about how the Longhorns have fared offensively in first quarters. “It’s not something we’ve actively talked about,” Herman said. Texas is outscoring opponents 45-40 in the opening quarter. The team has scored 107, 72 and 116 points in the other three frames. Texas has only put up three points in the first quarters of its last two games, so will it get off to a better start in Ames?

2. Will one of UT’s freshman receivers re-emerge?

Freshmen Jake Smith and Malcolm Epps both had moments early in the season. Smith scored four times over UT’s first four games and Epps had a nice outing (four catches, 53 yards) against Rice. Both have cooled off since, though. Smith and Epps have combined for five catches over the last three games. With the status of senior Collin Johnson and his hamstring up in the air, can Smith or Epps break back out against an Iowa State secondary allowing 231.3 yards per game?

Among Big 12 defenses, only Baylor (29), West Virginia (26) and Oklahoma (23) have recorded more than Iowa State’s 21 sacks. Oklahoma State shut Iowa State out on Oct. 26, but the Cyclones have registered at least two sacks in each of their other games. Texas has given up a conference-high 25 sacks, and the Longhorns will start a different combination on its offensive line for the first time this season since freshman Junior Angilau is out with a knee injury.

Among 130 teams, Texas ranks 124th nationally in passing yards allowed (299.6 yards per game). Five receivers have topped 100 receiving yards against the Longhorns. To make matters even more dire, UT will be without starting cornerback Jalen Green for at least a half due to last week’s targeting ejection. Iowa State receivers Deshaunte Jones and Tarique Milton have five 100-yard performances between them this season, and tight end Charlie Kolar is averaging 57.2 yards per game.

5. Must Dicker the Kicker need to come to the rescue again?

In two of its past three games, Texas has secured a win with a buzzer-beating field goal by kicker Cameron Dicker. In a 50-48 win over Kansas on Oct. 19, he nailed a 33-yard attempt as time expired. Last week, he was good from 26 yards out and Texas squeezed by Kansas State. Those two kicks represent one-fourth walk-off field goals in program history. Dicker has made 12 of his 16 attempts and he was successful on a 57-yard try at NRG Stadium in September.