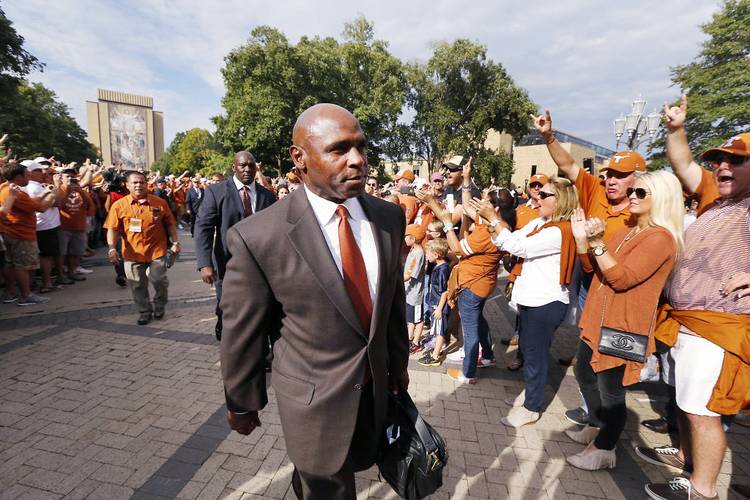 Done in by a kicker. And a freshman, to boot.

Notre Dame’s freshman kicker Jim Sanson — who prepared for college football by using palm trees for goal posts, who had nearly quit the team during preseason camp — nailed a 39-yard field goal to down the Longhorns in front of a then-record crowd of 83,312.

This is how the New York Times led its game story: “The kid dubbed ‘Foul Ball’ by his coach because he misses so many field goals in practice — became a hero today.”

Ricky Williams’ touchdown gave Texas a 24-17 lead with just under 11 minutes left in the game.

Williams rushed for 107 yards. Notre Dame’s Autry Denson, who tied the game with 2:54 left, rushed for 158. A late interception off a James Brown tipped pass set up the score.

The Irish put Sanson in position for the field goal by rallying in the final minute; after Texas’ 22-yard punt, Notre Dame got the ball at its own 43-yard line with only 59 seconds left.

It was the first loss of the season for Texas, which dropped another game the following week at No. 19 Virginia. The Longhorns (8-5) lost four of five games in the middle of that season, which ended with a 38-15 loss to Penn State in the Fiesta Bowl.

Texas: The Longhorns were 6-6, then fell to Arkansas in the Texas Bowl. Texas (6-7) dropped its final two games of the season, the bowl game as well as the Thanksgiving night game to TCU.

Notre Dame: The Fighting Irish started out 6-0 and reached as high as No. 5 in the national polls, but lost five of their last six games, finishing 7-5. Notre Dame upset LSU in the Music City Bowl, 31-28.

(1) It’s the start of Year 2 of the Charlie Strong era, coming off the 6-7 Year 1. (2) Tyrone Swoopes gets his latest, best chance at turning around public opinion of his quarterback play. (3) The Horns are practically going all-in with their freshmen — six will start tonight’s game, and there are 19 of the 27 players from the 2015 signing class listed on UT’s opening depth chart. (4) Two of those freshmen are on the offensive line, including the all-important left tackle spot (Connor Williams). (5) New quarterback for Notre Dame — Malik Zaire.