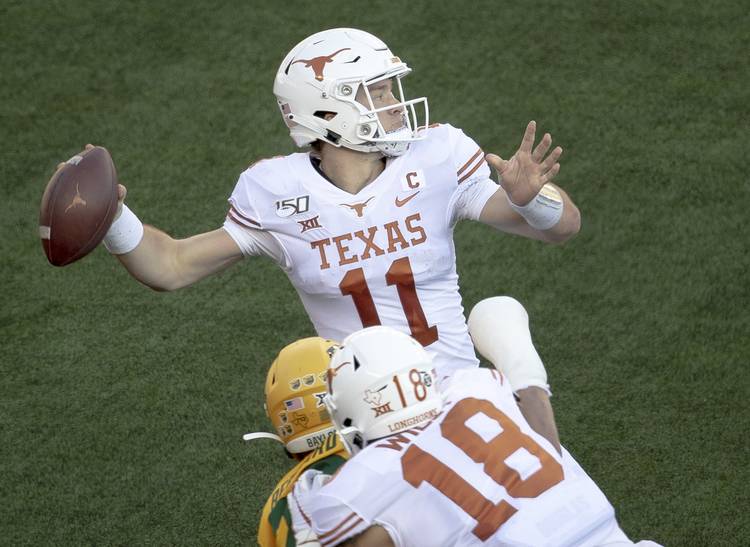 Five key matchups in the Texas-Texas Tech game to keep your eye on Friday:

This is a day when Ehlinger must carry the Longhorns to victory. The offensive ineffectiveness that’s plagued this unit the last two games must find a way. That means Ehlinger needs to look for Devin Duvernay and Brennan Eagles. He needs to run, probably more than anyone would like. And he  needs to go after the worst passing defense in the Big 12. Ehlinger has thrown four touchdowns four times this season, a school record. He’s likely to move into second place on the school’s all-time passing list against the Red Raiders. Ehlinger currently ranks third with 8,321 yards. Major Applewhite is second with 8,353 yards. Both trail Colt McCoy (13,253 yards, from 2006-09).

Duffey has struggled the last two games, completing about 57% of his passes in losses to TCU and Kansas State. But Texas gives him new life. Duffey orchestrated a wild fourth-quarter comeback against the Horns last season, wiping out a 17-point deficit and throwing for a career-high 444 yards and four touchdowns. Texas eventually pulled out the 41-34 win thanks to a miraculous touchdown catch by Lil’Jordan Humphrey. Still, Duffey has thrown for more than 400 yards only twice in his career. For UT, cornerback Jalen Green (ankle) is questionable and CB Anthony Cook (knee) is out.

Roach enters his final home game looking to cap four solid years in burnt orange. He’ll be one of 17 players honored before the game. The Louisiana native and son of a longtime coach, Roach may have a long career of coaching ahead of him, too. For now, he has 126 tackles and six sacks in 45 career games. He’ll be going against a Tech offensive line that has allowed only 14 sacks all season. Part of that is Tech’s offensive style. Duffey has a quick release, making it difficult for most defensive linemen to get home in time for the sack. That said, the Horns need pressure up the middle from Keondre Coburn and blitz pressure to make things uncomfortable.

Texas’ Keaontay Ingram suffered an ankle injury on his 68-yard run against Baylor last week and left the stadium in a protective boot. Even if he can play, he’s not likely to be at full strength. UT isn’t expected to have freshman Jordan Whittington, who just underwent another MRI for his sports hernia injury. Chances are he won’t play until 2020 even though coaches have tried to get him ready now. That shifts the focus to Johnson, who has been solid as a backup but someone who is on record as wanting to move back to quarterback this offseason. Brooks, a finalist for the Butkus Award, ranks third nationally in tackles for loss per game (1.8) and 13th in total tackles per game (9.8).

Wells and Orlando are close personal friends as they worked together at Utah State from 2013-14. Orlando then left to join Tom Herman’s staff at Houston, and they’ve been together ever since. Wells can smooth things over with his fan base by beating Texas. Other coaches have similar connections. Tech receivers coach Luke Wells worked with Herman at Iowa State from 2009-11. UT offensive line coach Herb Hand worked with Tech’s Keith Patterson and Paul Randolph at Tulsa. With of these coaching crossovers, it’s difficult not to imagine that somebody knows something, be it a hand signal or tendency in certain situations. The chess match in this game should be fascinating.