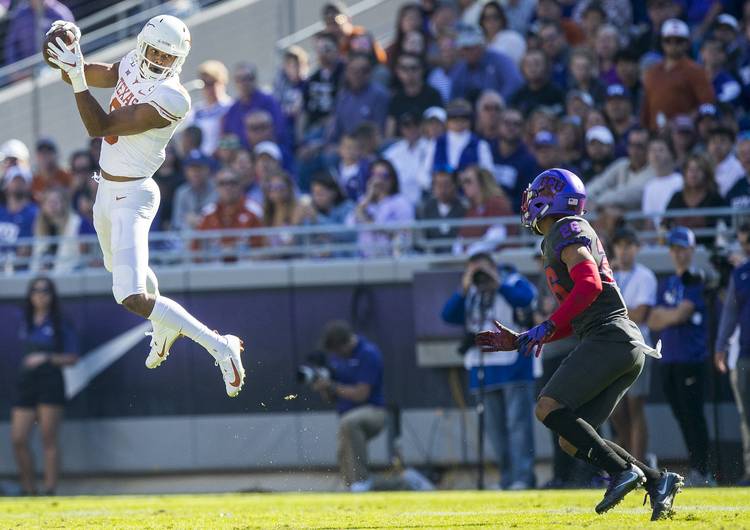 Texas receiver Collin Johnson (9) pulls down the ball as he looks for room to run against TCU safety Vernon Scott (26) at Amon G. Carter Stadium in Fort Worth on Oct. 26, 2019. [RICARDO B. BRAZZIELL/AMERICAN-STATESMAN]

1. Will Collin Johnson return in time for his Texas finale?

Johnson opted to return to school for his senior season, but a pair of hamstring injuries have cost him six games. Still, Johnson has 35 catches. Even though that total trails teammate Devin Duvernay by 68, it is UT’s second-best output. Johnson has missed the last three games. But he has practiced ahead of the Alamo Bowl. Will he be good to go against a Utah secondary that ranks 12th against the pass but will be missing two starters?

2. Who ends the season as UT’s leader in sacks?

Texas has only 22 sacks, which have been split among 13 players. Sophomore linebacker Juwan Mitchell leads with his three, and six others have either two or 2.5 sacks to their credit. Since 1975, Texas has never had at least one player who didn’t record four sacks in a season. Washington’s Joe Tryon and Oregon’s Kayvon Thibodeaux are the only players who registered at least two sacks in a game against Utah in 2019.

Ehlinger has thrown for 3,462 yards. That’s the third-best season in school history. It’s also 397 yards shy of McCoy’s 2008 record of 3,859 yards. This year, Ehlinger has recorded 401- and 399-yard games against LSU and Kansas. At 185.9 yards per game, Utah boasts a top-20 pass defense. But All-American safety Julian Blackmon, whose four interceptions lead the Utes, is injured and cornerback Jaylon Johnson is skipping to game to prepare for the NFL draft.

4. Does Texas keep Utah’s Zack Moss out of the end zone?

While Utah claims the nation’s top rushing defense, Texas has also posted top-50 numbers in that category. The Longhorns are allowed 139.8 rushing yards per game although six players have topped 100 yards against them. Texas will key on Moss. Utah’s all-time leading rusher has accounted for 15 of his offense’s 34 rushing touchdowns. He failed to rush for a touchdown in only two games and Utah was beaten in both of those contests.

5. Can Tom Herman record another win in a bowl game?

Over his first four seasons as a head coach, Herman has fared well in bowl games. During the 2015 season, Herman’s Houston Cougars upset No. 9 Florida State in the Peach Bowl. The Longhorns beat Missouri 33-16 in the 2017 Texas Bowl and No. 6 Georgia 28-21 in the 2018 Sugar Bowl. (Herman was not coaching Houston when the Cougars were beaten by San Diego State in the 2016 Las Vegas Bowl). As a FBS coordinator, Herman was 4-2 in bowl games.