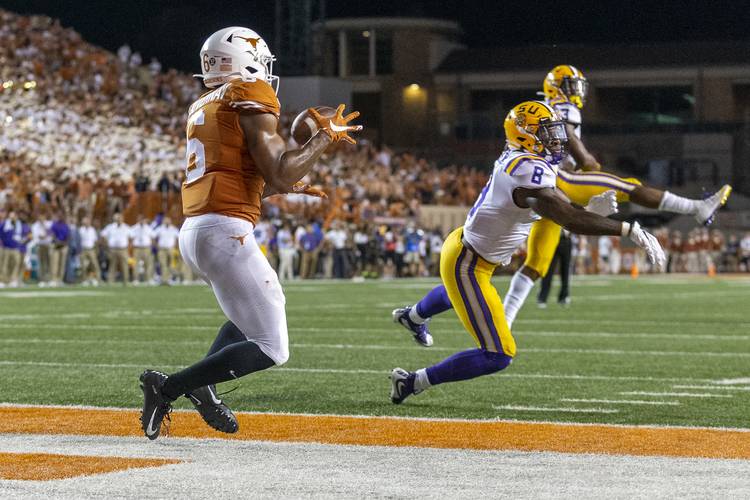 As a junior in 2018, Duvernay recorded career highs in catches (41), receiving yards (546) and touchdowns (four).  All three of those statistics will be bested this season, but will that happen on Saturday? Through only four games this fall, Duvernay has caught 39 footballs. Those 39 receptions have resulted in 377 yards, four scores and an addition to the Biletnikoff Award’s watch list. Duvernay’s 48-yard touchdown against WVU last year was the longest play of UT’s season.

2. What will a Neal Brown offense look like at West Virginia?

After Dana Holgorsen ended his eight-year run in Morgantown and departed for Houston, West Virginia lured Brown away from Troy. Both Holgorsen and Brown have ties to the “Air Raid” coaching tree, but Texas coach Tom Herman said this week that “the one thing that jumps off the film (about West Virginia) is they’re playing really, really hard and physical.” Brown led Troy from 2015-18 and only his 2016 team outscored one of Holgersen’s West Virginia squads.

3. Will West Virginia run wild against the Longhorns?

In its 2018 loss to West Virginia, Texas allowed a season-high 232 rushing yards. Both Martell Pettaway and Kennedy McKoy, who combined for 215 yards in that conquest, are back with the Mountaineers. Texas currently boasts a top-40 run defense and only Oklahoma State’s Chuba Hubbard has topped 100 rushing yards against the Longhorns. Hubbard needed 37 carries to get 121 yards two weeks ago, and the nation’s leading rusher is averaging nearly nine yards per carry in his other games.

4. Which team can limit the turnovers this weekend?

Not surprisingly, the team that won the turnover battle has been victorious in five of this series’ last six games. West Virginia has thrown four interceptions but lost zero fumbles in 2019. Meanwhile, UT’s four games have featured one interception and three lost fumbles (two of which were committed on special teams). Fourteen FBS-level teams have fewer turnovers than Texas and West Virginia in 2019. Last year, Texas and West Virginia respectively ranked fourth and 35th nationally in lost turnovers.

5. Will the “Horns Down” signal become another headline?

In 2018, West Virginia shoehorned itself into the list of UT’s chief antagonists. In that 42-41 victory in Austin, the Mountaineers were penalized twice for flashing the “Horns Down” signal and the fallout became a national story. At the Big 12 Media Days in July, West Virginia junior receiver T.J. Simmons said he was surprised that the celebration became a controversy, but he wasn’t “thinking about it, just ready to get back to play Texas again because that was a great game.”

The Dotted Line: Three prospects Texas hopes to add to the 2020 recruiting class