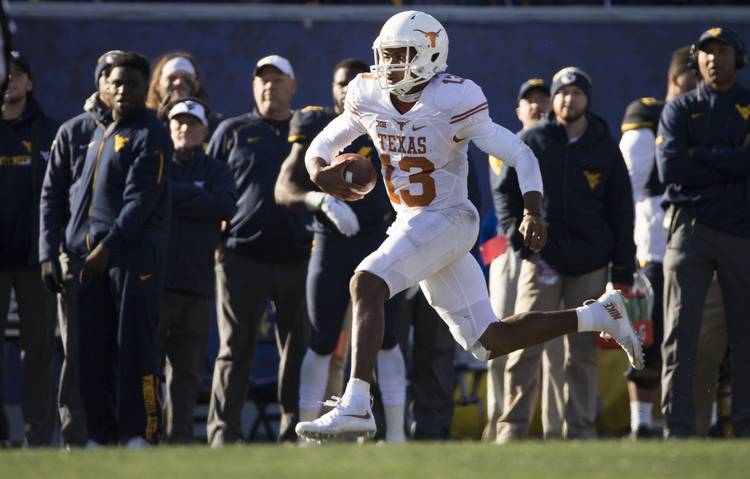 WHY TEXAS (4-6, 3-4) LOST: Because Texas, which was tied for the sixth-fewest committed turnovers in the country, had five of them on Saturday, with two interceptions and three fumbles. When you look at the final stats, the Longhorns actually held the edge over West Virginia in total yards, rushing yards, passing yards, first downs, third-down conversions, number of plays and time of possession. But the Mountaineers turned four of those five turnovers into 24 points.

WHY WEST VIRGINIA (5-4, 2-4) WON: Remember when the Mountaineers were a pass-happy team? That was so Geno Smith/Tavon Austin/Stedman Bailey/Kevin White ago. Wendell Smallwood went over the 1,000-yard mark with a 165-yard game and half of WVU’s offensive touchdowns were runs. WVU was averaging 37.3 points per game at home — and finished with 38; Texas was allowing an average of 37.4 points on the road — and gave up 38.

THE EYES OF TEXAS: … were on three specific Mountaineers — quarterback Skyler Howard, a Texan who can run and pass; kicker Josh Lambert, one of the nation’s most accurate kickers and a Lou Groza Award finalist last year; and running back Wendell Smallwood, who was only 31 yards away from a 1,000-yard season. How’d they do? Howard was 10 of 12 for 122 yards, with two touchdowns and one interception (Davante Davis). Lambert, with his big foot, had only one shot at a field goal, making a 19-yarder. Smallwood had 173 total yards, with 24 carries for 165 rushing yards.

Offense — D’Onta Foreman had 18 carries for 147 yards with a touchdown, and overcame a possible broken finger. Why isn’t he starting?

Cheers …
(1) Daje Johnson (4 catches for 76 yards) had his first receiving touchdown of the season.
(2) Peter Jinkens recorded a sack for the fourth straight game. He’s had a strong senior year.
(3) Take away the turnovers, and Texas had the statistical advantage (see above).

Jeers …
(1) Daje Johnson, for the second straight game, decided to field a punt inside the 10 with bad results.
(2) Texas had six holding calls (two were declined), and it was a long day for Connor Williams and Kent Perkins.
(3) Take away the statistical advantages, and those five turnovers may have led to another 50-7 day.

Texcetera: D’Onta Foreman has scored five touchdowns this season, each one averaging 39.2 yards, and he has three of the six longest plays from scrimmage for Texas this year (rushes of 93, 81 and 65 yards). … West Virginia now leads the all-time series with Texas, 3-2. … Johnathan Gray is now 57 yards away from cracking the top 10 list for UT’s career rushers. … Malik Jefferson led the team with 11 tackles, his first 10-tackle game of his career. … Davis’ interception was the first of his career; so far, four UT freshmen have had picks.

On deck: Texas Tech (Thanksgiving, 6:30 p.m./FS1). Saturday’s loss makes this a must-win matchup for the Longhorns, who even then would still need to manufacture an upset win at Baylor on Dec. 5. The Longhorns have no more wiggle room there. History, at least, is on Texas’ side; the Longhorns have won six straight and 11 of the last 12 against Texas Tech.