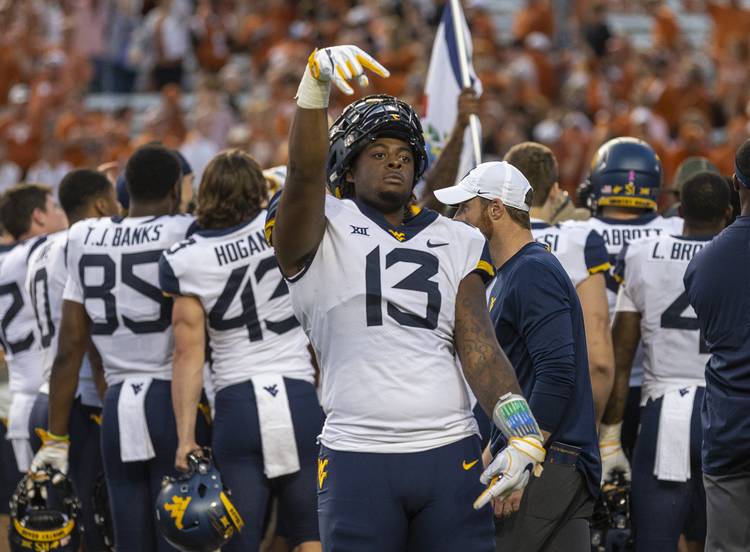 West Virginia defensive lineman Jeffery Pooler, Jr., (13) motions with the horns down signal towards the visitor side of the stadium after 42-41 win over Texas during a Big 12 Conference football game at Royal-Memorial Stadium, Saturday, Nov. 3, 2018. [Stephen Spillman for Statesman]

Quarterbacks Sam Ehlinger and Will Grier combined for 49 passes in the first half of Saturday’s 42-41 West Virginia win. But the arms belonging to the officiating crew were nearly as busy.

The Longhorns and Mountaineers were penalized 18 times over the first two quarters — 21 in all. One of West Virginia’s 12 flags led to the ejection of starting left tackle Yodny Cajuste, a member of the Big 12’s preseason team. Texas linebacker Malcolm Roach, who was playing for the first time since injuring his foot against USC in September, earned a horse-collar flag on a play that temporarily sidelined Grier. An offensive pass interference against Lil’Jordan Humphrey took a 45-yard touchdown catch by Collin Johnson off the scoreboard.

The flag that drew the most discussion, though, went against West Virginia receiver David Sills V.

Following a 60-yard touchdown catch in the first quarter, Sills celebrated by flashing a “Horns Down” sign with both of his hands. He was ruled to have taunted and was given an unsportsmanlike conduct penalty. Due to Sills’ penalty — and Cajuste’s 10-yard flag on the extra point — West Virginia set up a short touchdown drive for Texas by kicking off from its 10-yard-line.

After running in the decisive 2-point conversion in the game’s final seconds, Grier also pointed his Horns downward. He too drew a flag. Texas Tech receiver T.J. Vasher was also penalized in Austin for the same offense last year.

Big 12 spokesperson Bob Burda was at Saturday’s game; he told ESPN that taunting penalties were judgment calls for officials.

Depleted defensive debuts: Just ahead of Saturday’s kickoff, UT announced that safety Brandon Jones would sit after he aggravated an ankle injury at the team hotel. And on just the second play of the game, starting cornerback Davante Davis left the game after injuring his shoulder. The defensive line also took a took a beating as both Breckyn Hager (dislocated elbow) and Marqez Bimage (dislocated shoulder) left early.

Defensive tackle Chris Nelson made an unexpected start after being ruled out earlier in the week with an ankle injury, but Hager and Bimage’s exits tested UT’s depth on the defensive line. Senior Jamari Chisholm made his first appearance of the season. The Longhorns also played freshmen Keondre Coburn and Moro Ojomo for the first time in their collegiate careers.

Chisholm and Coburn each finished with a tackle while Ojomo had a quarterback hurry. Texas did not record any sacks of Grier, who threw for 346 yards. West Virginia, meanwhile, ran for 232 yards on 33 carries.

Texas coach Tom Herman said that even before Saturday’s injuries, UT had plans to play Chisholm, Ojomo and Coburn. A new NCAA rule allows players to appear in four games without burning their redshirt.

Noteworthy: West Virginia has now won four of its five games in Austin. The Mountaineers own a 5-3 edge in the overall series. … Humphrey led Texas with a career-best 143 receiving yards and his nine catches tied the career high he set against against Oklahoma on Oct. 6. Humphrey and Devin Duvernay became the first Texas duo to log two 100-yard receiving games since 2013 (Mike Davis and Jaxon Shipley vs. BYU). … Tre Watson led Texas with 80 rushing yards, and he added 35 receiving yards. He registered his first two-touchdown game as a Longhorn as he scored on a 5-yard run and a 32-yard catch. … Ehlinger is the 10th quarterback in school history with 4,000 career passing yards; he now ranks 10th all-time (4,088) and he’s ninth on the all-time list with 27 touchdown passes.