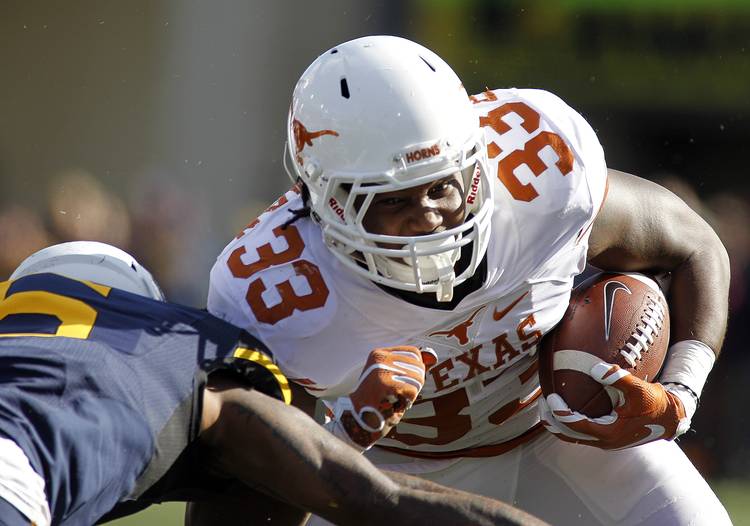 MORGANTOWN, WV - NOVEMBER 14: D'Onta Foreman #33 of the Texas Longhorns rushes during the game against the West Virginia Mountaineers on November 14, 2015 at Mountaineer Field in Morgantown, West Virginia. (Photo by Justin K. Aller/Getty Images)

DID TEXAS GET OFF TO A QUICK START?

Yes — for what it was worth. The Longhorns won the toss, then gave West Virginia the ball first knowing that they were 0-11 in the Charlie Strong era when an opponent scores first. Still, Texas took the early 3-0 lead and even led 10-7 after the first quarter — and lost, anyway. So that now makes Texas 10-2 under Strong when they actually score first. A good start was critical; in the three previous road games, the Longhorns had been outscored 51-0 in first quarters. Make that 58-10 now.

DID D’ONTA FOREMAN GET MORE CARRIES THAN JOHNATHAN GRAY?

Yes. Though who knows what would have happened had Gray not injured his ankle in the third quarter? Foreman had 18 carries (for 152 yards, with a touchdown) and Gray had 14 (57 yards) and produced his fourth 100-yard game of the season, his fourth of the last six games. It also was the third time he had more carries than Gray.

DID PETER JINKENS RECORD A SACK FOR THE FOURTH STRAIGHT GAME?

Yes. The senior linebacker, who finished with eight tackles, got to WVU’s Skyler Howard early in the fourth quarter. It was one of two sacks on the day for Texas, which has now produced 25 sacks over the last four games. Jinkens, with 6.5 sacks, leads the team this year. Five-and-a-half of those have come in the past four games.

DID DESHON ELLIOTT BUILD ON HIS TWO-INTERCEPTION GAME AGAINST KANSAS?

No. But then again, that’s hard to do when you’ve only got a few minutes to work with. Defensive coordinator Vance Bedford, who earlier this week said he’d like the freshman safety to take 30 snaps against West Virginia, didn’t insert him into the game until the fourth quarter, in place of Dylan Haines. Elliott finished with three tackles, certainly a step down from his two-interception day against Kansas. Maybe he’ll get more opportunities against Texas Tech.