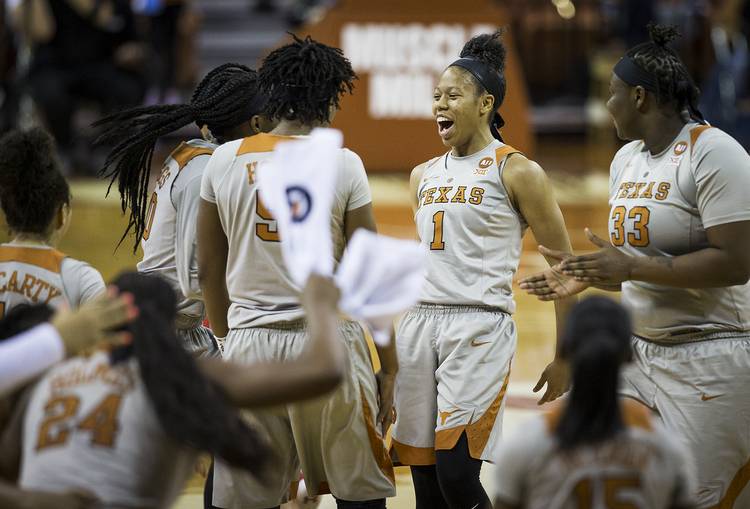 A glance at the team picture this fall will indicate the Texas women’s basketball team will have an entirely new look next season.

Karen Aston will stare up at a potential frontcourt that includes 6-4 Jatarie White, 6-5 Charli Collier and 6-7 Sedona Prince. No one can predict how the Longhorns — who have made it to four straight Sweet 16s — will fare, but they might be the tallest team in the country.

“We’re going to look different, no question about it,” Aston said Tuesday.

At times this season, Texas used a four-guard lineup that featured no one taller than six feet. But when the Longhorns landed Collier and Prince — ranked by ESPN as the Nos. 2 and 12 high school recruits in the country — the makeup of UT’s roster was changed dramatically.

“We were a very guard-heavy team this year,” Aston said. “I’m not saying we won’t be effective at guard because I think we will be. … We’ll just have more depth at the post position.”

Texas will adjust to a lineup that will no longer include three capable seniors — All-Big 12 guards Brooke McCarty and Ariel Atkins and 6-4 forward Audrey-Ann Caron-Goudreau.

McCarty and Atkins were largely responsible for helping Texas reach the Sweet 16 four straight years. Yet there was frustration after losing to UCLA last Friday in Kansas City because they never reached the Final Four.

“The stage is set and I think they have every opportunity to be what they want to be,” Atkins said. “They’re just going to have to work for it. They know what to do. It will be up to them.”

As for Atkins and McCarty, they are hoping their names are called when the 12-team WNBA convenes for its draft on April 12.

The most obvious change for the upcoming season will be the four incoming freshmen. The Texas recruiting haul is ranked No. 3 in the nation by ESPN.

“All four of them will make an impact,” Aston said. “Charli and Sedona provide depth in the frontcourt and they’re versatile. They can do a lot of different things. They can face up and shoot it. They’ve got more size so our defense will be different because they have some shot-blocking ability.”

Lashann Higgs had a breakout season and joined Atkins as the only players to start all 35 games. She was named to the Big 12 all-defensive team and to the all-conference second team.

The Longhorns hope 6-4 forward Joyner Holmes will have a bounce-back year after struggling following a 10-game fall suspension. The Big 12 freshman of the year in 2017, Holmes should benefit from summer and fall drills.

There is no word yet on whether freshman forward Rellah Boothe will return. Aston said “it’s not the right time” to speak about Boothe, who was suspended twice during the season for personal reasons.

No one will shoulder more responsibility next season than Sutton, who takes over for McCarty at point guard.

“Sug’s grown up in the two years she’s been here and she has a clear understanding that it’s her team now,” Aston said. “She and Chas (Chasity Patterson) will share responsibility at the point and they’re going to be fine.”