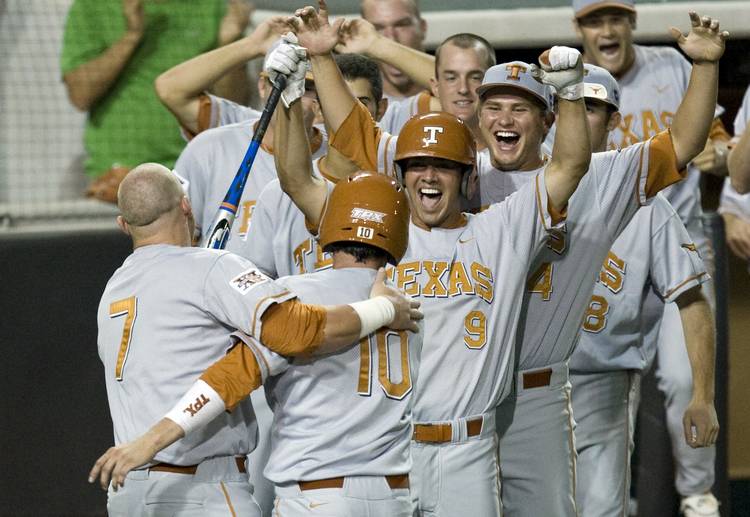 Wood, who was a senior relief pitcher for Texas, had a 6 p.m. regional baseball game against Boston College that Saturday. He also had a friend in from out of town that weekend who wanted barbecue, so Wood got up at 6 a.m. to drive up to Snow’s BBQ in Lexington.

The Longhorns would win that game. But it took 25 innings to secure the 3-2 victory, a game that took seven hours and three minutes to complete. Wood pitched 13 innings.

After a post-game that included celebrations, media obligations and a trip to Whataburger, Wood didn’t get to sleep until 3:30 in the morning. He was woken up early Sunday morning by a request to talk with Sports Illustrated.

Why the fuss? That 25-inning game still stands as the longest ever played in NCAA history, and Wood emerged as the folk hero. Eleven years later, members of both teams spoke with the American-Statesman about their recollections of that long night at UFCU Disch-Falk Field.

Before their 2009 marathon, Texas and Boston College had never played each other. And the two teams haven’t met since.

But 11 years ago, Texas was 42-13-1, the Big 12’s regular-season and tournament champion and the top seed in the NCAA tournament. Boston College, which had two high picks of that year’s MLB draft — catcher Tony Sanchez, who was fourth overall, and pitcher Mike Belfiore, who went 45th — had finished third in the ACC’s Atlantic Division. The Eagles were 34-24. Texas was a six-time national champion. Boston College was in the NCAA tournament for the first time since 1967.

Both had won their postseason openers in Austin. Texas beat Army 3-1 the day before, on Friday. Boston College took out Texas State, 8-7.

We knew what name we had across our chest. We were the No. 1 seed in the entire tournament. We had won the Big 12 outright, we won the tournament. We were playing good baseball. … But we expected to win. We didn’t come in and (say), “oh man, we’ve got to really buckle down here, it’s Boston College.” We knew that we still had to play good baseball, but we also knew who we were, what we were about and what kind of team we were.

Coming from the fields that we played at at BC, which is called the Birdcage, a little league-type backstop, we embraced that feeling of we’re the underdog and why can’t we win? Being in the ACC, we’ve played in the big stadiums at Florida State, Clemson, so I don’t think we were as intimidated as a small school for instance. We had all the confidence in the world to win that game.

In front of an announced crowd of 7,104, Texas grabbed a 2-0 lead in the second inning on Kevin Keyes’ homer.  The Eagles got a run back in the fourth and then tied the game in the sixth. After an Eagle reached second base with one out in the seventh inning, UT replaced starter Chance Ruffin with Wood.

Wood entered the game with a 5-1 record. At that point, his 15 saves were the third-most in school history. A converted starter, he had worked more than one inning in 25 of his 34 appearances that season. The day before, he recorded the final six outs against Army.

Against Boston College, Wood threw 169 pitches over 13 shutout innings. The Eagles went hitless over his first 12 1/3 innings. He ended up allowing two hits and four walks and finished the game with 14 strikeouts. He was pulled after surrendering a single and hitting a batter with one out in the 20th inning.

I remember the aftermath of that, which was a lot of people getting on Augie Garrido about (their opinions on) how ridiculous it was that he would leave Austin in, that it was a huge mistake, he didn’t care about Austin’s health and Austin’s arm.  Austin Wood is one of those guys, definitely a Texas boy, who absolutely was not going to come out of that game while he was pitching that way. Not only that, I’m guessing if you asked him right now, that’s probably the best baseball memory he’s got.

He was at 117 pitches and I was talking to coach Garrido, “Hey coach, what do you want to do here?” And he goes, “What do you mean?” I said, “He’s at 117 pitches.” And Austin Wood walks behind me and said, “If you think I’m coming out this game, you guys are crazy.” You know, and coach Garrido says,”There’s your answer.”

At that point, like, I knew I was throwing really well. I did not want to come out to the game. Just because my stuff had been working so good. But I think even early, you know — seventh, eighth and ninth — I knew my stuff was good just because of soft contact. What was unusual for me was the strikeout numbers. I was never a big strikeout guy.

It was one of those deals where he had it all. He was mainly a two-pitch guy, a fastball, change-up. And he had a slider that we ended up using quite a bit. It was unreal. I looked up and it was the 18th inning and he’s still going and I’m like, you’ve got to be kidding me.

I’ve said this numerous times and I still stand by it to this day: If we would have lost that game, my performance that game just would not mean the same that it does with a different outcome. That was an unbelievable night. A whole lot of fun.

Wood wasn’t the only standout that night. Austin Dicharry, a freshman who was the third pitcher that Texas used, allowed two runners over the final 5.2 innings. And Longhorns captain Travis Tucker plated the game-winning run in the top of the 25th inning with an RBI single. Even Belfiore, who had pitched one inning the day before against Texas State, started the night as the Eagles’ designated hitter but ended up throwing 9.2 innings of three-hit, shutout relief.

I think (Dicharry) only gave up one hard-hit ball (with two on and two outs in the 20th) and Connor Rowe ran it down. The biggest thing that night was we were the visitors, so any time they came to bat, they had an opportunity to win. … He threw the ball exceptional. He was exceptional all year. He was one of the guys we could count on coming out of the pen to throw strikes and get outs. I don’t think people talk about his performance enough.

Cameron caught the entire game, didn’t he? He called a great game back there. I always felt so confident with him behind the plate.

Their closer was really, really good. Everybody wants to talk about Austin Wood’s performance, which is historical and unbelievable. But their closer threw nine innings. He threw a complete game.

I had the feeling of no one can touch me. That was my thought process. I felt unhittable. That was kind of the feeling I had. (The game) was progressing nicely because Austin Wood had, obviously, the same feeling.

There’s a YouTube video (of the game-winning hit) that people keep on sending me. … It was a bad swing, but looking at it now, it was battling. I wasn’t worried about how hard I hit it. I just wanted to do a job, which is move the runner and score.

When Boston College’s Mike Augustine grounded out to Tucker at second to end the game, it was 1:05 a.m. on Sunday. The Eagles didn’t have much time to lament their loss. And Texas was gifted only a few more minutes to recover.

Boston College was due back at Disch-Falk at noon Sunday for an elimination game against Army. The Eagles fell 4-3 in a game that was played in 87-degree heat, and Army advanced to play Texas at 6. Texas then won its regional on a walk-off grand slam by Preston Clark.

We were just swollen and sore and obviously not as ready to play that game. We obviously lost that game. It is what it is, that’s kind of how the regional works.

I think that was the only time all year Skip told me I wasn’t an option that night. I didn’t put cleats on.

I don’t know if we would have won the next game if we played in the morning like Boston College did. That’s very difficult to do. If you look at the Army game, I don’t think we showed up until the seventh or eighth inning.

Using that 25-inning win as a catalyst, Texas advanced through the postseason and eventually reached the College World Series. Along the way, Texas had a flare for the dramatic.

Clark’s grand slam against Army capped a 14-10 win and an eight-run ninth inning. Texas won its CWS opener in Omaha on a bases-loaded walk. And the Longhorns secured a spot in the CWS championship series when Rowe hit a walk-off homer against Arizona State.

Texas and LSU split the first two games of the championship series before the Tigers claimed the national title with an 11-4 triumph. Texas finished its season 50-16-1.

That game was just the start of craziness for that whole postseason run.

We weren’t worried about stats or numbers, we were only worried about winning the game. We wanted to win. That’s what we did most of the season.

You hear this a lot in baseball and sports in general: Once you get that momentum going, it kind of carries you through. As we kind of started this snowball effect of picking up all these really dramatic wins, I think it really helped us carry us through the postseason. We were on cloud nine the entire time and really just enjoyed every second of it.