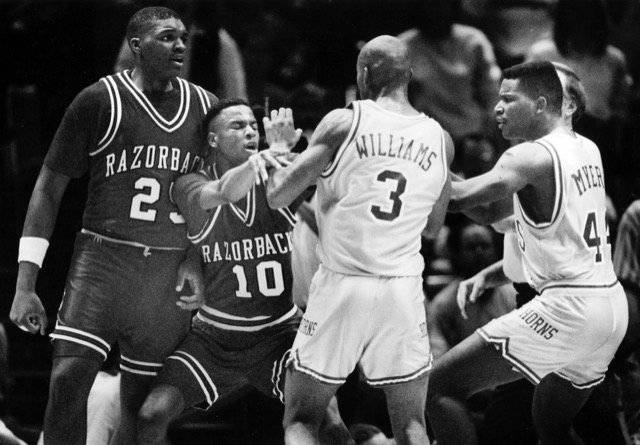 Thirty years ago, the Texas and Arkansas men’s basketball teams were in the middle of successful seasons in the Southwest Conference and on a collision course for the Elite Eight when one of their more memorable moments occurred in Austin on Feb. 4, 1990 — when Razorbacks coach Nolan Richardson walked off the court in the closing seconds of a heated game before returning for overtime in a 103-96 victory at the Erwin Center.

“It was great television,” Penders said. “It was incredible publicity for our conference and for our programs.”

The third-ranked Razorbacks were 18-2 with an unblemished 9-0 SWC record when they rolled into Austin on Feb. 4, 1990. They had won 11 straight games, including a nine-point win over Texas at Barnhill Arena just 10 days earlier.

From the opening tip, the teams known for their up-tempo styles did not disappoint the sellout crowd of 16,231 or the ABC audience. Momentum shifted throughout the first half as the third- and fourth-highest scoring teams in the country battled, neither able to get any separation. Arkansas led at the break, 44-40.

The second half mirrored the first as both teams pushed the ball on offense. With less than a minute remaining, the Longhorns (14-5, 6-2) clung to an 84-81 lead when Arkansas’ Lee Mayberry drove to the basket and missed a contested layup but teammate Lenzie Howell out-jumped UT players for a tip-in. That made it 84-83 with 22 seconds left.

The official retrieved the ball and tossed it to Texas’ Locksley Collie, who took a few hurried steps to his right from underneath the basket before firing a three-quarters court length pass, connecting with Lance Blanks mid-stride for what appeared to be a layup.
Mayberry, though, scrambled back in a last-ditch effort to recover and grabbed Blanks from around the waist to prevent the easy score. Mayberry was called for an intentional foul. Blanks headed to the line for two free throws and the Longhorns would retain possession of the ball.

Penders recalled that while that type of play hasn’t always been called an intentional foul, it was the right call.

“On the particular play, I remember it very well,” he said. “Mayberry aggressively grabbed Lance. Under the rules at that time, if you didn’t make a play on the ball, it was an intentional foul.”

Richardson, who admitted that he’s never actually watched the footage from that game again, naturally offered a different viewpoint. “I didn’t agree with the call,” he said. “I don’t think it was that vicious to warrant an intentional call. When they say you’ve got to foul, that’s intentional. I just didn’t see the call that way.”

Richardson, clearly upset by the call, didn’t stay in his seat for long.

“They had a one-point lead. Lance Blanks was at the line. He was going to shoot two,” Richardson said. “Then they were going to get the basketball. There’s 14 seconds left in the game. I said this is my good chance to move on.”

From the Texas bench, Penders saw Richardson rise from his seat and start walking away.

“I saw him kind of protesting the call,” Penders said. “He was standing up. He waved at the ref in a disgusted way. I didn’t know what was going on. I thought he was pulling one of my acts, getting thrown out of the game.

“I was shocked. He grabbed his coat, threw it over his shoulder, held it with two fingers, then he started walking my way. I didn’t know what to say.”

Richardson continued toward the Erwin Center tunnel as raucous fans showered him with a chorus of boos.

Penders, meanwhile, gathered his players together and began planning for the final few seconds while Blanks stepped to the line.

“My brain went back to coaching and getting the other guys to the sidelines because I knew the referees were going to blow a technical foul for Richardson leaving and we would have some time to talk about what we were going to do without calling a timeout,” Penders recalled.

The technical foul was never called.

Tanco, who was the game’s lead official, said there was a simple explanation why his crew didn’t call the technical.

“I’m looking the opposite direction at the players and I’m watching the shooter. I have no idea what Nolan is doing,” Tanco recalled. “I don’t even know until they’ve told me he walked off.

Said Penders: “I was asking the referees why we’re not shooting a technical. I said that’s got to be a technical foul. And they just tried to ignore me and pretend it didn’t happen.”

With no technical called, Blanks stepped up to the line and converted both free throws. Texas led 86-83 and got the ball out of bounds. On the inbounds play, the Longhorns followed Penders’ instructions, getting the ball to Travis Mays, their best free throw shooter.

This is where the story could have ended, had the normally reliable Mays made that first free throw. But he didn’t.

Mayberry grabbed the rebound with 11 seconds left and immediately pushed the ball up the court. After crossing mid-court, he dribbled behind his back to the right, then back between his legs to his left, and with six seconds remaining he picked up the ball and elevated from around 25 feet, well beyond the 3-point line. Blanks and Mays were the two nearest defenders, but neither got close enough to get a hand in his face, clearly not expecting a shot from that distance.

Meanwhile, back in the Arkansas locker room, Richardson said he was expecting to hear the roar of the UT fans celebrating the victory. Instead, there was an eerie silence.

“I could hear nothing. It was so quiet,” Richardson said. “It took me 14 seconds to walk back there, and by the time I sit down, I figured I would hear this big roar and they would be tearing down the building. But I don’t hear anything. A few seconds later the door opens, and my manager Matt Zimmerman comes in yelling at me, Coach! Coach! Coach!”

Zimmerman told Richardson to get his jacket. “For what,” the coach asked, confused.

For a split second, Richardson considered staying in the locker room.

“Usually I wouldn’t have gone back,” he said. “I would have said let my assistants Mike or Scotty finish up the game. But it was Tom. I gotta go back and face old Tom again.”

Moments later, Richardson made his way out of the tunnel and was again greeted by boos from the Longhorns faithful. At that point, he didn’t mind. He only had one person he wanted to talk to.

“When I went back out, I saw Tom,” Richardson said. “I told him we’re gonna kick your butt now.”

The Razorbacks backed up their coach’s words. Arkansas outscored Texas 17-10 in the extra period, escaping with a 103-96 win.

Arkansas would finish that season 34-4, going 15-1 in the SWC to win both the regular-season title and the post-season conference tournament. The Razorbacks blew past Princeton, survived Dayton, crushed North Carolina and survived another 88-85 war with

Texas in the Elite Eight before falling to Duke in that year’s Final Four. Texas, which finished 23-9, made the NCAA Tournament for the second straight season for the first time in school history, earning its first Elite Eight trip in 43 years.

Thirty years later, both coaches are retired. Richardson, now 78, left Arkansas in 2002 and lives on a ranch in Fayetteville. Penders, 74, left the Longhorns in 1998 and is in Austin. Blanks went on to a career as a NBA scout and executive, Mays ended up playing internationally before going into college coaching and Mayberry, who was a first-round pick in 1992, ended up coaching high school basketball.

Penders and Richardson both said that while there were tense moments and differences of opinion about that 1990 game, the overall Texas-Arkansas rivalry was good for the SWC.

“I think between the Longhorns and the Razorbacks, we lifted the Southwest Conference to a different kind of level in college basketball,” Richardson said.