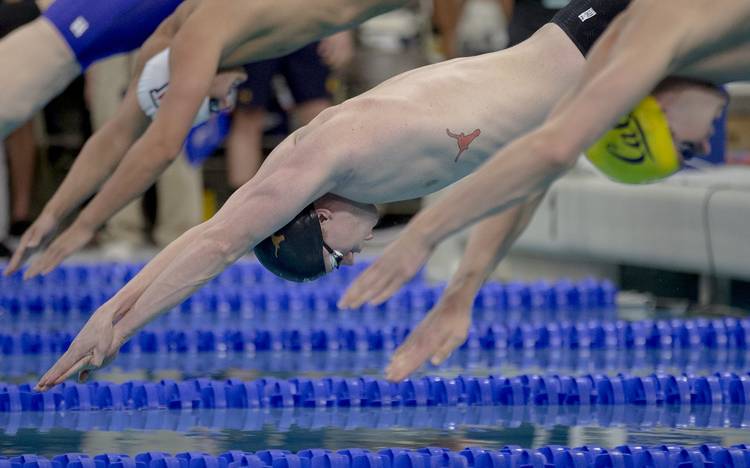 Texas swimmer Townley Haas dives into the pool at the start of the 500-yard free during the NCAA men's swimming and diving championships on Thursday, March 28, 2019, in Austin, Texas. [NICK WAGNER/AMERICAN-STATESMAN]

Texas senior Townley Haas wanted to start out fast in the finals of the 500-yard freestyle Thursday night and see what happened.

What happened was an NCAA record.

Haas blew away the competition by more than two seconds and set a new meet and NCAA mark in the event with a time of 4 minutes, 8.19 seconds on the second day of the NCAA men’s swimming and diving championships at the Texas Swimming Center.

Haas bested the previous mark by 0.23 seconds and swam the second-fastest time in the event’s history.

“I talked with the coaches about going out a little faster than normal, and that’s what I tried to do,” said Haas, who has won the event three of his four years as a collegian. “I took out almost as hard as I could and just tried to hang on. … It felt good doing that, it was just a bit rough (finishing).”

Even with the crowd and public address announcer in a frenzy following the race, it took Haas a few moments to realize what he had done.

“It took me a little bit to be able to read the board as my vision was a little blurry,” he said. “I was very happy. I would have loved to be a little quicker to get the American record (4:07.25) but the previous record was incredibly fast, so I was really happy.”

Haas highlighted a solid day for the Longhorns, who had multiple all-American performances as they chase a fifth straight national title.

“I’ve always had my heart set on this event,” Shebat said. “It’s fun to swim. I had big goals, and I’m very satisfied and shocked with the time. The last 50 yards felt a lot better than usual. I always wanted to go under 1:40, but since it was such a far reach from my previous best time, to make it happen is pretty incredible.”

Sannem and Kibler also teamed up with Austin Katz and Charlie Scheinfeld for third place in the 400 medley relay (3:01.58), taking more than two seconds off their previous best time.

“We had our best times in both the relays, so that was good,” Sannem said. “I’m happy to be a part of it. Getting third in both is a huge deal. We just wanted to do our best and we did that.”

The Longhorns finished the day with 188 points and sit in second place, 24 points behind California, who won three of the day’s five events.

“I feel good where we are,” Haas said. “We all look really good and are performing a lot better than last year, and that’s always good.”

In other performances of note, Indiana set a new pool record in winning the 400 medley relay, while Cal senior Andrew Seliskar set a new meet record in the 200 individual medley (1:38.14).