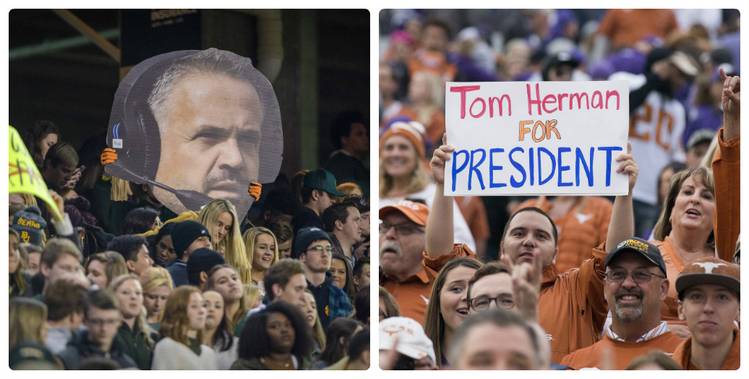 Baylor coach Matt Rhule (left) and Texas' Tom Herman (right) both have been embraced by their fan bases over the past three years. So far, Rhule is 17-18 and Herman is 23-14. (Staff/wire photos)

With Texas essentially out of the Big 12 championship race, it’s best to reframe the debate about Saturday’s game at McLane Stadium.

It’s not necessarily about which team is better — Texas or No. 14 Baylor.

Maybe the question should focus on which program is getting the better return on investment: The Longhorns with Tom Herman or the Bears with Matt Rhule?

These two 44-year-old coaches meet at a fascinating moment, both in the 2019 season and in their careers.

The Longhorns must prove they can muster the proper motivation in these final two regular-season games. A season full of promise turned into one where the Horns ended up tight-rope walking over the abyss more times than anybody dreamed.

“Yeah, their season has been eerily similar to ours, although they found a way to win those close ones,” Herman said.

For the Bears, it’s senior day. Nineteen players in green and gold will be honored beforehand. The four-year lettermen who signed with Briles endured the abrupt changeover to Jim Grobe when they were freshmen and suffered through a miserable 1-11 season in 2017, Rhule’s first year in Waco.

Meanwhile, Herman took over a far different situation in Austin that same year. Former coach Charlie Strong didn’t leave in scandal, but he did get pushed out after three straight losing seasons. Herman lifted Texas to a 7-6 season in his debut campaign.

In 2018, the Longhorns went 10-4, reached the Big 12 championship game and then won the Sugar Bowl. Many believed Herman and the Horns were on their way. Rhule’s Bears went 7-6, and most thought it was a respectable season and the program had a bright future with quarterback Charlie Brewer.

This season, Texas has slipped backward while Baylor has kept the pedal on the metal. Rhule’s club started 9-0 and was cruising. That was until it blew a 25-point lead last week to Oklahoma and lost 34-31.

So how good are these players at the coaches’ disposal? Herman’s three recruiting classes since his arrival have ranked 25th nationally (2017), third (2018) and third (2019). Rhule’s three classes ranked 40th, 29th and 35th during the same period, according to 247Sports’ composite ratings.

Regardless of the one-game hiccup, Rhule applauded his veterans this week for turning the Baylor program completely around given ridiculously long odds.

Rhule said he told the Bears’ seniors that “someday they should write a (ESPN) 30-for-30 about you.” Some players chose to leave. Garland Sachse wide receiver Devin Duvernay and Silsbee guard Patrick Hudson both signed with Baylor on national signing day in February 2016, but got out of their national letters of intent when Briles was fired. They signed with Texas later that June, becoming two of the Longhorns’ top-three rated recruits in their class along with Nacogdoches safety Brandon Jones.

Duvernay has turned in an All-America caliber season this year. Hudson retired from football this spring after a series of injuries.

“All the young players were sitting there and I had to remind them, these seniors, at one point they were 2-16 through the course of the end of 2016 and through 2017,” Rhule said. “And all they have done is just shut up and work and work and work.”

Rhule has yet to win a senior day game in Waco. “So, I want to see these guys walk off the field winners because they deserve that, they have been winners,” he said.

NFL teams already have their eye on Rhule. He’s interviewed for head coaching jobs each of the last two years, with the Indianapolis Colts and the New York Jets. In September, Baylor extended Rhule’s contact to 2027. “I like our recruiting base, I like living in Texas, I like coaching in Texas,” he said then.

Herman’s name has not been connected to NFL jobs, at least not publicly, but UT officials have shown him contractual love, too. He was given a two-year extension after the Sugar Bowl win, pushing his deal out to 2023.

Herman is scheduled to earn $6.75 million this year, which includes a $1 million stay bonus that’s due on Dec. 25. His entire contract is guaranteed. As a private school, Baylor doesn’t have to release financial terms. Using federal tax returns, USA Today determined that he will earn $4.1 million this season.

Both coaches are building with Austin-based quarterbacks. Texas’ Sam Ehlinger is from Westlake; Brewer is from Lake Travis. The Horns are averaging 36.1 points per game this season; Baylor averages 34.9.

“Offensively, (a) scheme very similar to us,” Herman said. “Obviously (Brewer is) the gas that makes their engine go, much like ours is, and he’s having a great season, can run around, make some plays with his feet.”

Rhule said he doesn’t know Ehlinger well. “The guy is courageous, he throws his body around, he runs the football, he does whatever his team needs to move it,” he said. “I don’t know what the stats are right now, but a lot of the time he is their leading rusher and that’s really who Charlie is as well.”

The difference this season has been defense. Baylor leads the Big 12 in scoring defense this season, allowing just 20.5 points per game. That’s what made last week’s meltdown against OU much more surprising.

Texas, besieged by injuries in the secondary, appears to have steadied its defense after a dreadful start. The Horns rank eighth in the league, allowing 29.9 points per game.

“I think (UT’s) Todd Orlando’s one of the best defensive coordinators in college football, and I’ve believed that for a long time since he was at Houston,” Rhule said.

Saturday’s game shouldn’t prompt fans to anoint the winner and denigrate the loser. It’s merely one step in a long journey for both. That said, recruits are always watching to see how coaches and programs ebb and flow.

For Texas, this three-hour grudge match is a chance to bounce up after getting knocked down last week against Iowa State. Baylor wouldn’t mind kicking Texas and leapfrogging those in burnt orange on the Big 12 pecking order in the process.

“This will be a good challenge for us to see what we’re made of in terms of responding to being knocked down,” Herman said.

The Dotted Line: Baylor’s Rhule playing it slow on the recruiting trail, but betting on himself