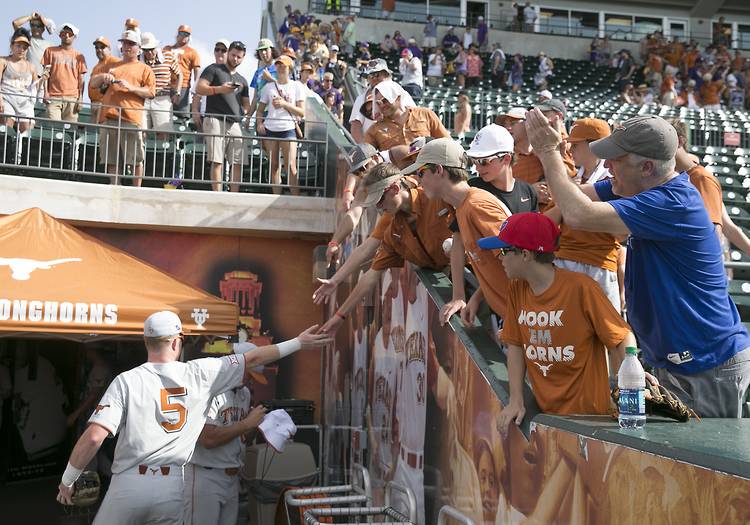 Texas infielder Ryan Reynolds high-fives fans after a super regional game against Tennessee Tech at UFCU Disch-Falk Field on June 10, 2018. Reynolds will coach some of his teammates in UT's fall finales this week. RALPH BARRERA / AMERICAN-STATESMAN

Last February, for example, Todd hit a walk-off home run against Louisiana-Lafayette. From the third base position, Reynolds has recorded memorable plays to get UT out of jams in postseason games against Long Beach State and Indiana.

Todd’s bat and Reynolds’ glove, however, will stay in the dugout for this week’s Orange and White Fall World Series at UFCU Disch-Falk Field. Todd is rehabbing an ailing shoulder and Reynolds was just cleared from a back injury that has sidelined him for the fall. Instead, the juniors will serve as the coaches in this three-game intrasquad series.

“It’s pretty cool to actually be put in coach (David) Pierce’s shoes,” Todd said. “You never know what you’re going to do after baseball’s done with you. It’s pretty cool to see how he manages this whole thing and the kind of stress that he’s under. I’m not saying we’re under any stress, but I get it.”

Added Reynolds: “I’m not saying I was in class making lineups and stuff, but I was getting a big picture in my mind.”

The draft is complete and your Fall World Series rosters are here. See you Thursday, Horns fans. #HookEm pic.twitter.com/j5fwnYYLRH

The Orange and White Fall World Series — spread over Thursday, Friday and Sunday, with every game free to the public — will close out the fall season, which began in late September.  In a twist, Pierce will leave the coaching to Reynolds and Todd. He has named himself the commissioner and plans on watching from the stands. Pitching coach Phil Haig will still manage the arms, but assistant coaches Sean Allen and Philip Miller get to play the roles of general managers.

The Longhorns held their draft on Tuesday. All-conference players like David Hamilton and Zach Zubia will join Reynolds. Todd will pencil Masen Hibbeler, Tate Shaw and Duke Ellis — UT’s starting outfield for much of last season — into his lineup.

There were, of course, draft shenanigans. Senior catcher Michael McCann was automatically placed on Todd’s roster before the draft and DJ Petrinsky, the incumbent at the position, won’t catch this week as he rests his shoulder. So Todd used his second pick on freshman Caston Peter, the team’s No. 3 catcher.

“If he wants to cheat, it’s OK. We can talk it out on the field,” replied Reynolds, who explained that Todd took Peter when infielders were being drafted.

Todd countered that catchers were fair game in the infield.

Pierce, by the way, got involved and traded Peter to Reynolds’ team.

Texas held more than 20 intrasquad games throughout the fall and hosted long scrimmages against McLennan Community College and San Jacinto College in October. This week’s series will have a different vibe, but the stakes may be higher. McCann said members of the winning team will earn the right to wear a Texas hoodie for the winter months. The ability to talk smack in the clubhouse is also on the line.

Texas is less than five months removed from a 42-23 season, a Big 12 championship and an appearance in the College World Series. Texas lost five players to the MLB draft and first baseman Jake McKenzie graduated. Seven of UT’s returnees, though, earned at least 200 at-bats last year and pitcher Blair Henley was an all-conference honoree.

“Everything we do is based around Omaha,” McCann said. “We have talent and all that, but we really pride ourselves on being true grinders and coming out every day and getting better in some aspect of your game.”