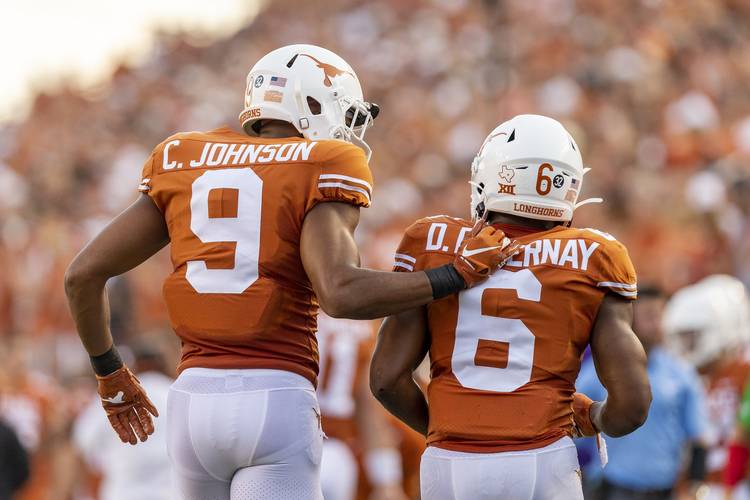 Throughout this season, Collin Johnson has used the same story to illustrative the competitive nature of fellow receiver Devin Duvernay.

On the Friday ahead of one of the first games, the Longhorns were playing basketball, using trash cans as hoops. In one of the games, a team led by Johnson beat Duvernay’s. Angered by the loss, Duvernay did not speak for the rest of the day.

Duvernay doesn’t dispute the story. “If they’re keeping score or people are watching, I want to win,” he has said. During availabilities with the press this season, he has answered in the affirmative when asked if he’s one of the nation’s top receivers and the Big 12’s fastest player. At a practice in September, Longhorn Network cameras caught him bragging about his arm (“You know I’m the best QB you’ll never see”) and roasting Michael Huff when the 2005 Thorpe Award winner pondered what would happen in a hypothetical one-on-one matchup between the two (“Touchdown”).

“It’s just his nature; he’s just competitive as can be,” Johnson said.

Duvernay, though, doesn’t want this all to get twisted. Maybe Johnson takes losses in trash can basketball better, but Duvernay insists Johnson is just as competitive when it comes to football. And that on-field competitiveness is setting up an interesting debate in UT’s career record books.

Johnson could become the sixth Texas player with 200 career receptions. He’s one of only nine Longhorns who have 2,000 career yards; Duvernay is 291 yards away from becoming the 10th.

Their final numbers could determine how they’re viewed among UT’s best receiving duos. Shipley and Quan Cosby rank first and fourth on the all-time receptions list. Roy Williams and B.J. Johnson are second and ninth. Jaxon Shipley and Mike Davis each had 200 career receptions.

Johnson and Duvernay both arrived as parts of Charlie Strong’s final recruiting class. Johnson, the son of former UT All-American Johnnie Johnson, committed when he was a high school sophomore. Duvernay, from Garland Sachse, originally committed to Baylor but wound up as Texas’ highest-rated recruit of 2016 due to the fallout of Baylor’s sexual assault scandal.

Duvernay and Johnson each had breakout moments their freshman years. Duvernay scored on 63-, 75 and 80-yard passes in consecutive games. Johnson had a two-touchdown performance during a thrilling win in Lubbock.

Under new coach Tom Herman and offensive coordinator Tim Beck, Johnson became the Longhorns’ top target as a sophomore. Last year, he teamed with Lil’Jordan Humphrey for 154 catches and 2,161. Those totals are the second-and fourth-best single-season totals for a UT tandem.

What Johnson and Humphrey did in 2018 overshadowed a nice season by Duvernay, who had 41 catches and four touchdowns. Under-utilized as a sophomore, he started every game on the outside spot opposite Johnson. He moved into Humphrey’s slot position this past offseason and has since burst onto the national scene. He’s leading the country in receptions, five ahead of Oregon State’s Isaiah Hodgins and Pitt’s Maurice Ffrench.

Johnson was named a captain ahead of this season and Duvernay got that designation midway through. Their maturation on and off the field has impressed their offensive coordinator.

“They played as freshmen so they never had a year to have that redshirt and develop,” Beck said. “They’ve worked really hard at developing their craft and learning the game.”

Johnson missed three games this season with a hamstring injury. He left the Oklahoma game early with a head injury but was at full strength for last week’s tussle with Kansas. Against the Jayhawks, he and Duvernay each caught eight passes.

In the 50-48 win, Texas found itself facing a 48-47 deficit with 1:11 remaining. With the football on its 25, Texas went 60 yards in nine plays to set up Cameron Dicker’s 33-yard field goal. The last of Sam Ehlinger’s throws was a 6-yard toss to Duvernay. Johnson hauled in 16-, 20-, and 11-yard passes on the drive and had another reception nullified by a penalty.

“I told (Collin) after the game it was super nice to have him back,” senior center Zach Shackelford said.

Herman has noted that the consistency of Duvernay and Johnson — coupled with the emergence of a running game and sophomore receiver Brennan Eagles — will make “defensive coordinators hopefully ponder long and hard on how they’re going to choose to defend us on a week-to-week basis.”

Up next for Texas is a TCU team that Johnson has scored against in each of the past two seasons. This Horned Frogs are allowing 181.0 passing yards per game. Only two receivers have caught more than five passes in a game against TCU, though Iowa State’s Deshaunte Jones and SMU’s James Proche both had 10-reception days.

This time next year, it’s possible that they’ll both be playing on Sundays. Johnson considered entering the NFL draft after last season. Duvernay’s draft stock has risen this fall.

“We’ve just been in the fire together,” Johnson said. “Every single year, we’ve just been fighting next to each other. If I go to war with anyone, I’d want someone like Devin by my side. We’ve been through a lot together. It’s just my man, plain and simple. I love going to war with him each and every week.”

The Dotted Line: Week 9 guide to watching Texas commitments in the 2020, 2021 classes