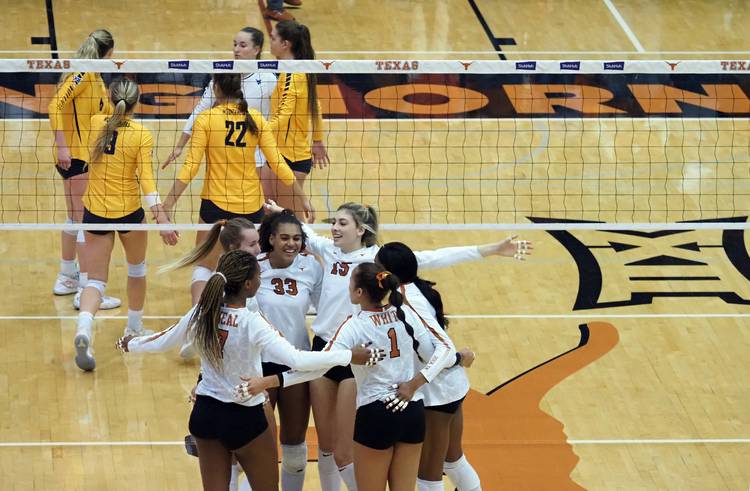 With a pristine performance at home Sunday afternoon, top-ranked Texas remained atop the Big 12 standings.

After the match, the Longhorns didn’t seem too daunted by the target placed on their back by that No. 1 ranking. To borrow a motto from the football program, “This is Texas.”

“I think we always have a target on our back just being Texas,” Eggleston said. “I think a lot of teams just know our history and always want to beat us. Jerritt’s put a big emphasis on not really looking at the numbers and not looking at the rankings.”

Added head coach Jerritt Elliott: “When you have the Longhorn on your shirt, that’s your target right there. We get that enough as it is. The No. 1 doesn’t do anything else.”

Texas entered Sunday’s matinee with the nation’s third-longest winning streak in conference play. UT’s streak trailed only Creighton’s 34-match run in the Big East and Stephen F. Austin’s 31 straight wins against Southland opponents. With Iowa State being the only Big 12 team to take a set off the Longhorns, Texas had swept its last eight conference foes.

Led by Eggleston’s nine kills, Texas jumped out to a 2-0 head start in its quest to remain perfect among its Big 12 peers. The Longhorns led by as many as nine points in the opening set. West Virginia pulled within 22-21 in the second, but two kills from White helped Texas close out that set.

UT trailed only once in the third set. For the match, the Longhorns hit .384. That hitting percentage — boosted by a career-high .722 from Eggleston and freshman middle blocker Asjia O’Neal’s .600 — was 50 points higher than UT’s season average.

“I think (setter Jhenna Gabriel is) doing a really good job evenly distributing the balls as well, so the block doesn’t really know who it’s going to go to,” O’Neal said. “I feel like we’ve had a lot of splits in teams for our hitters to go and attack and score.”

As sophomore middle blocker Brionne Butler got a rest day, Texas tied a season low with its five blocks. Elliott noted that “you’d like a few more blocks, but the biggest thing is their hitting percentage.” West Virginia hit only .146, its sixth-worst effort of the season.

Only a Friday trip to Oklahoma is on UT’s schedule for this week. The next week, Texas will host Kansas State and TCU. The Longhorns are 9-0 at home this season, and a Big 12 opponent last scored a victory in Gregory Gym in 2014.

Notes: White hit .314 with a match-high 15 kills and moved past Angie Breitenfield (1,460 kills) into seventh place on UT’s all-time chart. White has 1,467 career kills. Next up in the record books is Juliann Faucette, who has 1,587. … West Virginia (11-12, 2-8) was led by Katelyn Evans’ 10 kills. … Gabriel contributed 32 assists and seven digs. … All time, Texas is 16-0 against West Virginia. The Longhorns swept the Mountaineers twice this fall.

The Dotted Line: What does Texas do at cornerback for the 2020 class?