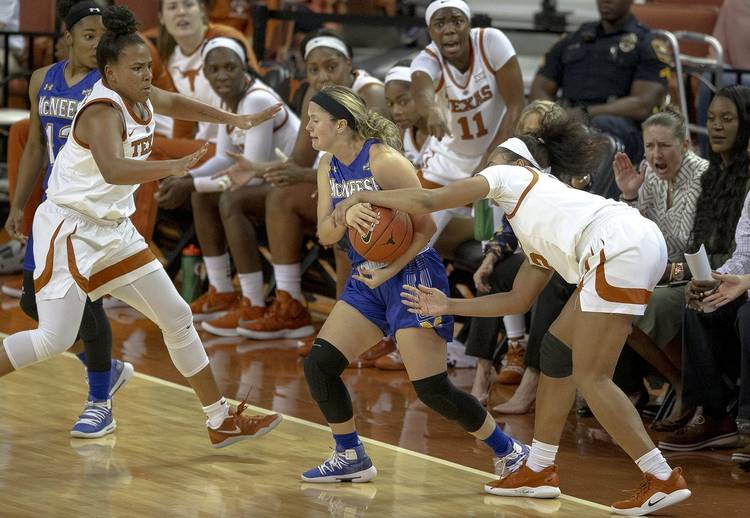 Danni Williams said that the rough start to her new life with the Texas Longhorns was a concern, just not much of one.

Williams, the graduate transfer guard who left Texas A&M to join the Longhorns, converted 4 of 6 three-point attempts and finished with 14 points Thursday night as No. 11 Texas defeated McNeese State 96-40 at the Erwin Center.

Last season Williams set an A&M single-season record with 71 three-pointers, and she made them with strong 38.6 percent accuracy. But she missed 17 of 19 shots, including 11 of 12 three-point tries, in her first two games as a Longhorn.

“When you come to a new school, you don’t want to start off like that,” Williams said. “I was struggling a little bit mentally, but my teammates and coaches told me to just shoot the ball and relax. You can’t hesitate. This is not the first time this happened. You just have to keep pushing through it.”

The Longhorns’ top two 3-point shooters last season were seniors Brooke McCarty and Ariel Atkins. Into the void steps Williams and, at least so far, Destiny Littleton, a sophomore who has converted 5 of 11 three-point attempts as a backup guard, including two against McNeese.

Littleton, the leading scorer in California high school history, averaged 42.7 points her senior year. She is the last vestige of a three-player recruiting class ranked third-best in the country. Neither Littleton, Rellah Boothe nor Chasity Patterson played much last season, certainly not when it mattered. Boothe transferred to a junior college during the offseason, and Patterson left the Longhorns last week with intentions of finding a new school herself.

This year’s class, also ranked third-best, already is contributing, although the Longhorns (3-0) have yet to face a high-level opponent.

Charli Collier, the 6-5 freshman, led Texas with 15 points and five blocks against McNeese. Freshmen Joanne Allen-Taylor and Audrey Warren scored 11 and 10, respectively. Sedona Prince, the 6-7 center from Liberty Hill who suffered a broken leg playing for a U.S. national team during the summer, is recovering nicely, but her status for this season is uncertain.

It’s difficult to judge the Longhorns against such an overmatched opponent. McNeese (0-3) shot 23.8 percent and committed 30 turnovers. Texas made 21 steals, tied for sixth-most in program history. Jada Underwood led the way with four.

The Longhorns were not so good in that area, either, committing 17 turnovers.

“We were really good in the first game of the season (10 vs. Duquesne),” coach Karen Aston said. “And the last two we’ve had a few too many. Some of them are just in too big of a hurry to make a play instead of making a simple pass.”

Texas made 15 turnovers at North Texas on Monday. Six were by junior Sug Sutton, and Collier committed five. Sutton committed only two against McNeese, and had five assists — two fewer than Lashann Higgs’ game-high seven. Collier had three turnovers.

“I would say the pace of the game is more difficult for me,” Collier said. “Coming from high school it’s a big step. Everything is a faster pace. When I get the ball, making sure I slow down, actually know what I’m doing, and not being in such a rush.”