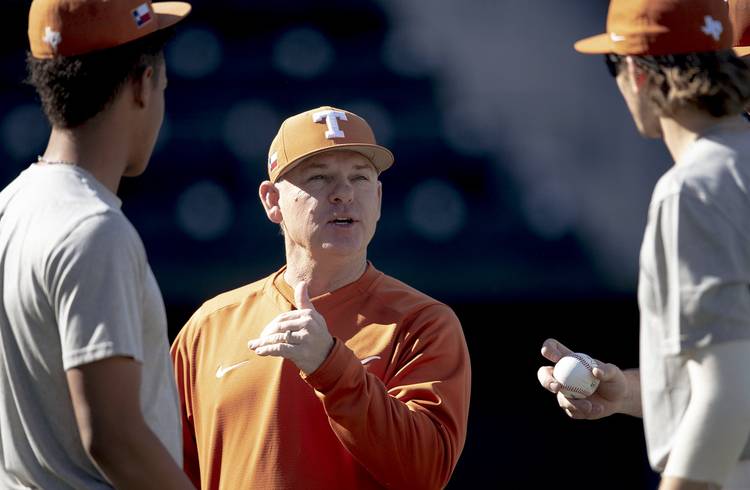 As he greeted the media ahead of Texas’ first practice of the season, baseball coach David Pierce wanted to talk about the weather.

Late-January forecasts often call for chilly temperatures, wind and an occasional drizzle. But the Longhorns were greeted by 65-degree sunny weather Friday at UFCU Disch-Falk Field. Pierce went as far as to claim that “this is probably the very best day of Day 1 that I can recall in the past 30 years.”

After a disappointing 2019 season, there are reasons to believe that sunnier days are ahead. The Longhorns have a bonafide ace in Bryce Elder and catcher DJ Petrinsky has worked his way back from a shoulder injury. Returning outfielders Duke Ellis, Eric Kennedy and Austin Todd combined for 149 starts last year. Former designated hitter Zach Zubia has transformed his body and will play first base.

Like, what will the middle of the infield look like? And which pitchers — both behind Elder and in a beleaguered bullpen — will step up? And since freshman Andre Duplantier II fractured a bone in his left hand, who will be the front-runner at third base?

And then there is Texas’ freshman class.

There are 17 freshmen on the roster. Shortstop Trey Faltine, catcher Silas Ardoin and pitcher Jared Southard are all on campus despite getting drafted last summer. Douglas Hodo III, whose father started on UT’s 1983 national championship team, could press the three veteran outfielders for playing time. Brenden Dixon might start alongside Faltine in the infield, and Petrinsky predicted that left-handed pitcher Pete Hansen is “going to help us out a lot.”

Pierce sees similarities between this team and the 2005 Rice team on which he served as an assistant coach. Fifteen years ago, Rice started several freshmen and reached the third game of the super-regionals.

“With us coming in, I think all the coaches have really good confidence in all the freshmen that we’re going to be out there and do what we do best and perform just like we have all these years,” Faltine said. “I think it should be no different here at the University of Texas.”

Said sophomore pitcher Ty Madden: “You’re going to look on this field and there’s going to be plenty of them playing. You’re not going to be able to tell if they’re freshmen because it don’t matter when you pass that line.”

Only 21 days separate Texas’ first practice and the first game. Left off of D1Baseball’s preseason poll, the Longhorns will open their season with a weekend series at Rice on Feb. 14.

The last time fans saw the Longhorns, they were wrapping up a 27-27 season. Texas reached the College World Series in 2018 but missed both the Big 12 and NCAA tournaments last year.

“I hate losing and I feel like a lot of people in that locker room do, especially the guys that carried on to this year,” Madden said. “Now we kind of have that bitter taste in our mouth and know what it takes. We learned a lot from that older group last year and we’re excited to get after it.”