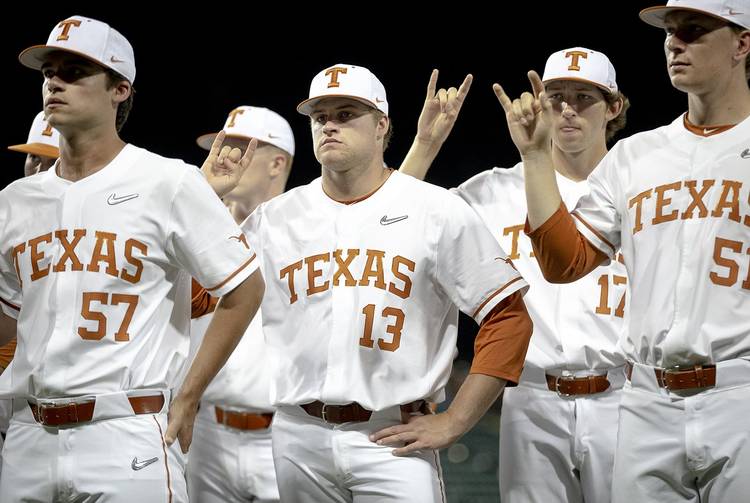 Texas pitcher Bryce Elder (13) stands for the playing of "The Eyes of Texas" after Oklahoma defeated the Longhorns on May 16, 2019 in Austin. [NICK WAGNER/AMERICAN-STATESMAN]

On the evening of May 17, Texas closed out its 2019 baseball season with a 6-4 win over Oklahoma at UFCU Disch-Falk Field.

The Longhorns (27-27; 7-16 Big 12) won’t participate in the Big 12’s tournament this year. The team won’t hear its name called when the NCAA reveals its postseason bracket on Memorial Day. Calendar-wise, Texas hasn’t ended a season this early since it stopped playing baseball in 1998 on May 10.

For a 2018 College World Series participant that was also ranked ninth in the D1Baseball poll as recently as the school’s spring break, such an ending could be labeled as disappointing, mind-boggling or stunning. Surrounded by family, friends and a few autograph-seeking fans on Friday night, junior outfielder Duke Ellis found a different way to describe UT’s 2019 season.

“A fluke,” Ellis said. “Honestly, if we re-run this season again with the same team, I don’t think it happens like that again.”

Where did things go wrong for Texas in 2019? Good luck pinpointing one problem.

After ranking fourth nationally in fielding percentage in 2017 and leading the NCAA in double plays last year, Texas regressed on defense. Texas failed to develop a third starting pitcher and a young bullpen couldn’t grow up quick enough. No Big 12 team has issued more walks than Texas’ 257. One year after Kody Clemens clubbed 24 home runs by himself, UT went deep 27 times. The Longhorns had a positive run differential but lost 10 conference games by two runs or less. Shortstop David Hamilton injured his Achilles in a preseason scooter accident and a nagging shoulder injury limited catcher DJ Petrinsky to 39 at-bats.

A 36-time qualifier for the College World Series, this marks only the fourth time that Texas has failed to reach the NCAA tournament in the season after it appeared in Omaha. The Longhorns had built-in excuses in 1951 and 1964 since the fields for those tournaments respectively featured eight and 21 teams. UT wasn’t penciled into the 64-team bracket in 2012, but it still competed in the Big 12’s tournament. Texas also posted a winning record during those three aforementioned seasons.

UT coach David Pierce did not seem pleased about the team’s chemistry this season but said his biggest frustration was that the team “never got over the hump.” In his seven previous years as a head coach at Texas, Tulane and Sam Houston State, Pierce never missed the NCAA tournament.

Pierce already has a list of 20 things that he thinks will improve the team, although he insists that method of self-evaluation isn’t a new concept. Starting on Monday, individual meetings will be held with players and mechanical tweaks will be suggested. After that, some Longhorns will leave for their summer league assignments while the coaches turn their attention to recruiting and camps.

When the Longhorns return for fall practices, some building blocks will be in place. Sophomore Bryce Elder finished his first year as a starter with a 2.93 ERA and three of the Big 12’s pitcher of the week awards. Freshman outfielder Eric Kennedy led UT with his .310 batting average. Second baseman Lance Ford had some memorable moments during his first season of college baseball.

“It’s a really young team so they can only grow from here. It was only go up, that’s how you can look at it,” Hibbeler said. “I know they’ve got some stud recruits coming in so it should be fun to watch in years to come.”