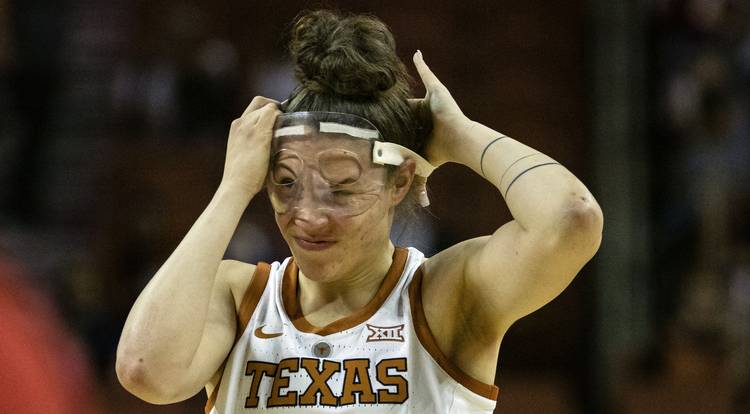 Texas Audrey Warren, (31, puts on her face mask as she enters the game against Texas Tech. She hopes to remove the mask for good during the playoffs. [Rodolfo Gonzalez for AMERICAN-STATESMAN]

With the exception of a concussion, a broken nose and a black eye, it’s been a swell season for Texas freshman Audrey Warren.

An easy smile Warren carries indicates she no longer dwells on the injury that forced her to miss three games. When asked to describe the moment that changed her season, she had to be reminded that it was 6-6 Texas Tech center Erin DeGrate who accidentally elbowed her across the bridge of her nose in a Jan. 26 game in Lubbock.

No hard feelings, she tells a visitor at UT’s practice court in Cooley Pavilion.

Advertisement
The facial bruising has vanished. The swelling on her nose has mostly subsided. The only visible reminder of her experience is a plastic face mask she is required to wear until the nose is completely healed.

Warren, who estimated she has had four concussions, found some humor while discussing the subject.

“I always thought I was hard-headed,” she said.

Warren has been a pleasant surprise during her first season. Averaging 5.8 points and 2.9 rebounds, she was a relative unknown from Boswell High outside Fort Worth on a freshman class that includes McDonald’s All-Americans Charli Collier and Sedona Prince. Warren has been named Big 12 freshman of the week twice.

Karen Aston isn’t surprised Warren has made a positive impact.

“Audrey has a great understanding of the game, retains terminology,” the coach said. “She came to Texas with a high IQ.”

A basketball vagabond, Warren played for three different high schools before graduating from Boswell last June. A native of Springfield, Mo., she chose to play at Catholic High there as a freshman because her father, Cliff Warren, was an assistant coach. When he vacated that position, she transferred to nearby Kickapoo, helping her team win the 2016 Missouri state high school activities state championship with a 29-3 record.

When the family moved to Texas before her junior year, she spent her final two seasons at Boswell. During that span the Pioneers earned a 69-8 overall record, 28-0 in District 3-5A.

“When I came in, I knew that I came in for a reason,” she said. “I want to be part of it. I’m not going to just stand on the side. Embrace everything that comes to you.”

While her freshman season can be labeled a success, she has not been the same player on the court since taking the elbow to the face. In the three games she has played since that encounter — including Saturday’s rematch with Texas Tech — Warren has scored a total of four points to go along with four rebounds.

“Two things have happened (since the injury),” Aston said. “First, she’s a little gun shy with contact. Second, when she comes in the game now she’s sometimes in too big of a hurry to make a play. You don’t have to score the second you get back in there.”

Warren hopes to ditch the face mask when the playoffs begin with the Big 12 tournament March 8-11 in Oklahoma City.

“Having it on gives me a sense of safety and protection,” she said. “My only issue is the peripheral vision because of its thickness.”

As for her future, call the broken nose a small bump in the road.