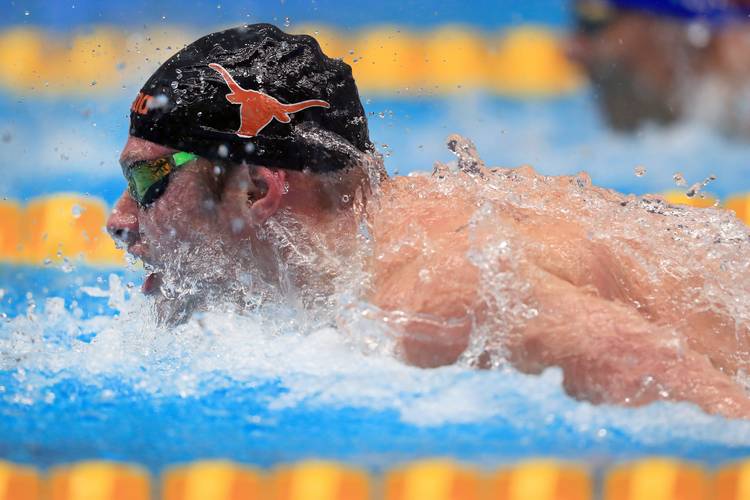 A trio of UT representatives finished in the top-four in the men’s competition.

Jack Conger took third place in the 100-meter butterfly, just missing out on qualifying for the event in the FINA World Championships in Budapest, Hungary in July. His time of 51.33 was just 0.03 seconds behind Tim Phillips. Conger, a former Longhorn swimmer, won the 200 butterfly on Tuesday in 1 minute, 54.47 seconds, earning a spot on Team USA.

Sam Pomajevich, who will join UT as a freshman next season, finished the consolation final of the 100 butterfly in fourth with a time of 53.33.

Johnathan Roberts, a soon-to-be senior at Texas, finished the 400 individual medley in 4:15.50 to take fourth place.

John Shebat, a rising junior for the Longhorns, took fourth place in the 50-meter backstroke with a time of 24.88.

Madisyn Cox, former three-time All-American at Texas, took fifth place in the 400-meter IM with a time of 4:40.39. Though she came up short of qualifying for the event at the World Championships, she’ll have another opportunity in Saturday’s 200 IM.

Lauren Case, who will be a sophomore at Texas next season, finished in a tie for fourth of the 100 butterfly consolation final in a time of 59.58. Remedy Rule, who will start her junior year at Texas, finished in eighth with a time of 1:00.08.

Olivia Anderson took third place in the 50 breaststroke consolation final with a time of 31.61. She’ll be a junior next season at Texas.