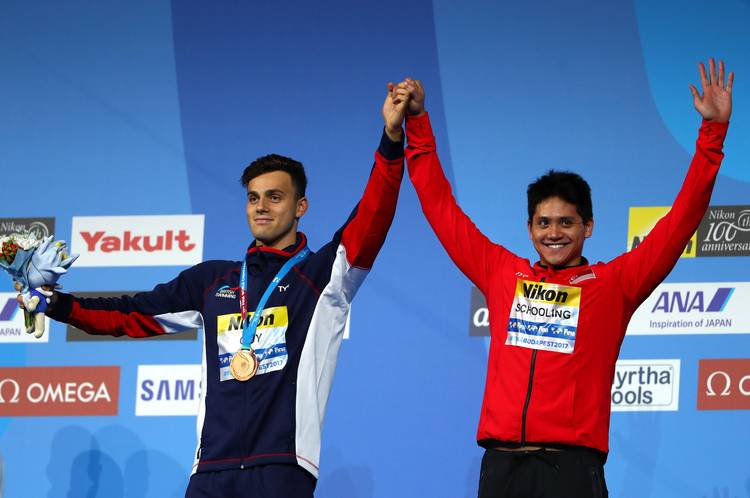 Bronze medalists James Guy of Great Britain and Joseph Schooling of Singapore pose with the medals won during the Men's 100m Butterfly final on day sixteen of the Budapest 2017 FINA World Championships on July 29, 2017 in Budapest, Hungary. (Photo by Clive Rose/Getty Images)

Haas took gold as a member of the 400-meter mixed relay team. He swam in the preliminary round to help Team USA qualify second in the event. The junior at UT finished his leg in 48.32 seconds.

Caeleb Dressel, Nathan Adrian, Mallory Comerford and Simone Manuel competed in the final and took gold for the U.S. with a new world record, 3 minutes, 19.60 seconds.

In all, Haas has earned two gold medals, a silver in the 200 freestyle and bronze in the 800 freestyle relay. His other gold medal was in the 400 freestyle relay last Sunday. He, alongside Dressel, Blake Pieroni and Adrian took the race in 3:10.06. Haas had the best split in the event at 24.85.

Schooling won the bronze medal for Singapore in the 100-meter butterfly with a time of 50.83 seconds. He tied Great Britain’s James Guy to share bronze after qualifying fourth in Friday’s semifinals.

The senior at UT adds a second FINA World Championships bronze medal in the event to his trophy case, to go along with the gold he won in 2016 at the Olympics in Rio de Janeiro.

The American-Statesman’s Top 25 countdown: No. 1 Alabama