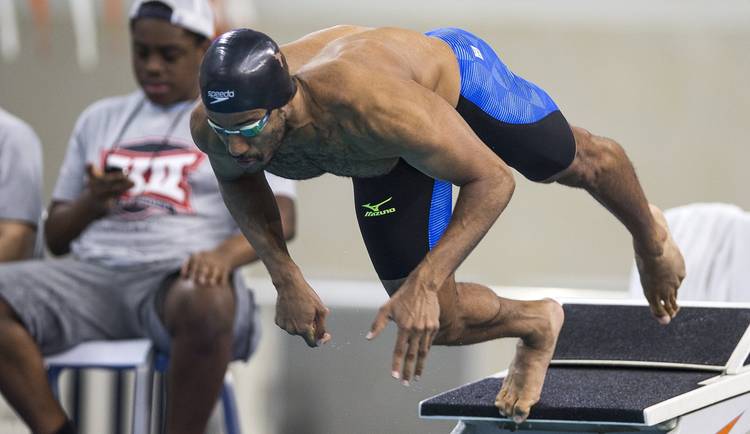 Texas swimmer Brett Ringgold takes off from the starting block in the 50-yard freestyle during the Big 12 swimming & diving championships in Austin, Texas, on Thursday, Feb. 22, 2018. NICK WAGNER / AMERICAN-STATESMAN

The Texas women made it a clean sweep while the men won six events at the Big 12 swimming and diving championships at Jamail Texas Swimming Center on Friday night.

The Longhorns men lead with 723 points, 112 points ahead of West Virginia, while the women are up 703-434.5 over the Mountaineers.

“I just wanted to get out there as quick as I could and race with my teammates,” Schooling said. “Hopefully I posted a good time. We’re not in the best shape right now to race, but right now, the big thing is just giving your best.”

“This meet, we’re just focusing on a great strategy and executing the race leading up to the NCAA Championships,” Rule said. “A win is a bonus.”

Freshman Evie Pfeifer won the Big 12 championship in the 400 individual medley with a time of 4:10.27. It’s her second title of the meet.

Jonathan Roberts won his third Big 12 title in the 400 IM with a time of 3 minutes, 43.72 seconds. He joined Michael Klueh as the only other Longhorn to achieve that feat. The Longhorns took the top three spots with Sam Stewart finishing second and Ryan Harty taking third.

Townley Haas made it three straight titles in the 200 freestyle. The junior finished the race in 1:33.53. Jeff Newkirk took second while freshman Parker Neri finished third for Texas.

The Texas women earned one more win than the man, the 100 breast stroke. Kennedy Lohman took the title in 59.25.

Claire Adams made it six straight 100 backstroke titles for Texas with her win in 51.13.

Freshman Jordan Windle won the 3-meter diving event with 470.80 points for his first Big 12 championship. On the women’s side, Alison Gibson took the 3-meter competition with 388.05 points.

The Big 12 Championships conclude on Saturday.

Kevin Durant weighs in on NCAA scandals: ‘I don’t think it’s right’ that players ‘don’t get a dime’