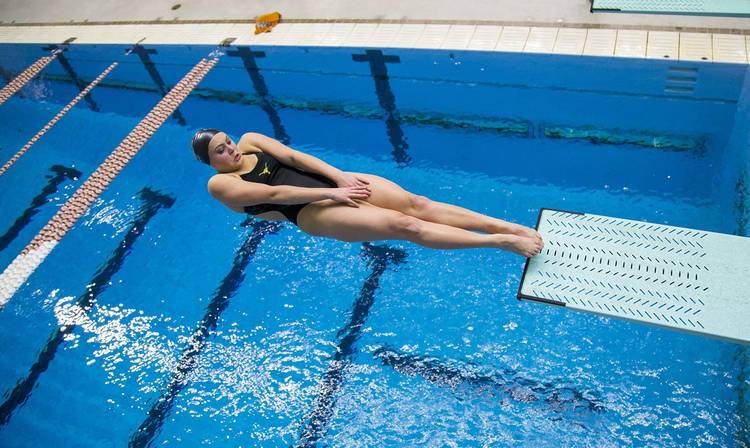 The Texas women are in third place after the second day of the NCAA swimming and diving championships in Columbus, Ohio.

Texas has scored 109 points through the first two days. They trail first place Stanford by 102 points.

Diver Alison Gibson had the best finish of the day for Texas, taking fourth in the one-meter diving final. She couldn’t repeat as champion in the event but earned All-America status for the second year in a row. Gibson scored 320.65 points with her best dive earning 55.20.

Evie Pfeifer took sixth place in the 500 freestyle to become the first Longhorn in 10 years to achieve All-America status in the event. Her time of 4 minutes, 36.96 seconds earned 13 points for the Longhorns. Susana Escobar took All-America honors for Texas in 2008.

“That’s one of the toughest freshman performances I’ve ever seen,” said Longhorns head coach Carol Capitani. “That 500 final was the fastest it has ever been, and for her to negative-split a 500 and move up a place in the final was beyond fantastic.”

Texas opened the day with an eighth-place finish in the 200 freestyle relay. Rebecca Millard, Claire Adams, Brooke Hansen and Remedy Rule teamed up to post a mark of 1:28.41.

In the Longhorns’ other relay, the 400 medley, they finished in sixth with a time of 3:30.61. Adams, Kennedy Lohman, Lauren Case and Millard swam the seventh fastest time in school history.

“It was big this morning to have both of those relays in the top-eight,” Capitani said. “We haven’t done that here in a long time. The success of this team was how well they swam this morning to position us to score well tonight.”

Millard added five points to Texas’ total with a fourth-place finish in the consolation final of the 50 freestyle. She finished the race in 22.24.

The third day of NCAA swimming and diving championships gets started at 8 a.m. with finals set for 4 p.m. Friday.

Texas forward Rellah Boothe will not play in NCAAs