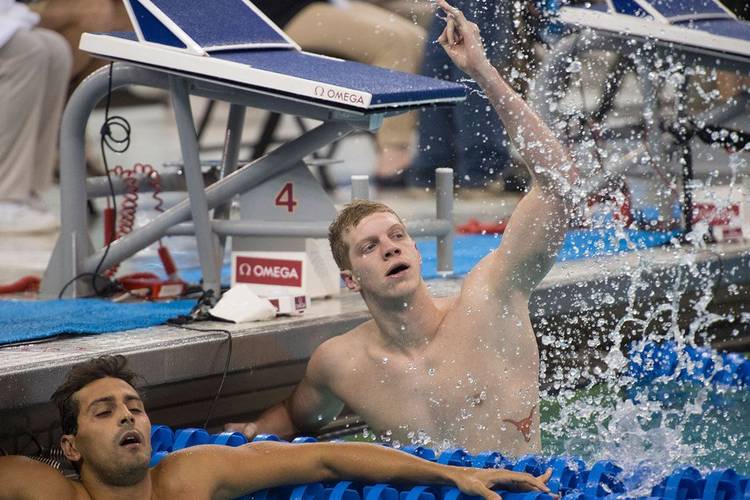 Texas won its fourth straight NCAA swimming and diving title Saturday night, surging ahead of the field on the final session of competition.

California was second, followed by Indiana.

Freshman Jordan Windle gave the Longhorns a 13.5-point lead thanks to his second-place finish in platform diving, the next-to-last event of the meet.

Then the 400-yard freestyle relay clinched the title with a fourth-place finish, one spot behind Cal. The Longhorns swam the relay conservatively to make sure there was no chance for a disqualification.

It’s UT’s 14th team title as a program. That’s the most in NCAA men’s swimming history. And it’s the second time in program history that Texas has won four straight national titles. UT also did so in 1988-1991.

The Longhorns won by 11.5 points. The margin of victory was the second closest of the 14 UT has won. UT was victorious by 11 points over Stanford in 2002.

Texas freshman Austin Katz and teammate John Shebat swept the top two spots in the 200-yard backstroke to put the Longhorns in contention for their fourth straight NCAA team championship.

Jonathan Roberts was fifth in the backstroke to give UT a huge push.

The Longhorns also received big points in the 100 freestyle with Townley Haas in sixth and Tate Jackson finishing seventh.

Unreal swim from our freshman Austin Katz to win the 200 backstroke! First freshman to win that for Texas since Aaron Peirsol in 2003. #NCAASwimDive #HookEm pic.twitter.com/TEihjs9jqB