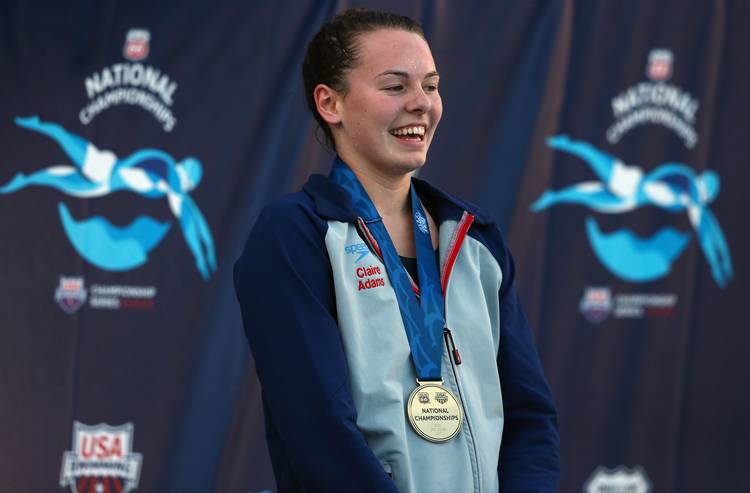 Claire Adams on the awards stand for the Women's 200 LC Meter Backstroke during the 2015 Phillips 66 National Championships at the Northside Swim Center on August 9, 2015 in San Antonio, Texas. (Photo by Ronald Martinez/Getty Images)

The Longhorns swimming and diving teams combined for seven wins and a pair of UT records to conclude the Texas Hall of Fame Swimming Invitational at the Jamail Swimming Center Saturday.

Claire Adams took two wins on the night, one individually and another in record-setting fashion as a member of the 400 freestyle relay. Grace Ariola, Julia Cook and Anelise Diener joined Adams to finish the race in 3 minutes, 9.56 seconds for a new school record.

The men took five wins on the night, highlighted by Tate Jackson who broke the pool and school record in the 100 freestyle. He finished the race in 41.06 for his third individual win at the event.

Andrew Kooustik also came away victorious, finishing the 200 butterfly in 1:42.39.

The Longhorns also won the 400 freestyle relay in 2:48.96. Drew Kibler, Jackson, Jake Sannem and Townley Haas teamed up for the win.

The men and women each won 11 events overall at the event.